Posted on January 1, 2013 by Rathina Sankari

This post is a part of the ‘Shave or Crave’ movement in association with BlogAdda.com

It was the first day of the New Year and I was busy preparing the breakfast when the doorbell rang. I opened the door to find someone standing tall with cheeks that looked like a honey comb. On closer inspection I recognized him to be our neighbor Amol who had managed to grow a moss of hair that was beyond the stubble stage.

On further inquiry I got to know he was trying out a new look but the growth wasn’t good so was planning to shave it off. Immediately my dear husband said you need to trim the beard that is when it will grow evenly else there wouldn’t be proper growth and it would lead to dead hair. Oops, here was someone who was actually planning to go the clean shave way when he is being given free advice to get into the ancient primal age. I asked him is Kavitha fine with the new look, he replied you will have to check with her. I am sure she wouldn’t be rather who would be from the fairer sex?

During the aboriginal days when men didn’t know the art of shaving facial hair it was found in abundance in adult males. In modern times other then religious beliefs it doesn’t go well with the metro sexual look. Today men are found to be waxing their legs and chest so the very obvious facial hair should be given the utmost priority. Women wouldn’t want to be rubbing their cheeks and lips against sand paper. Social kissing disclaims the bristles look.
Just few days back I ran into my friend Pooja in a shopping mall. She wasn’t her vibrant self though she did try to be. I was done with my shopping and was craving for a cuppa so offered her one. She readily accepted and there we were perched on a sette with the aroma of roasted beans when she opened up. Well cupid had stuck her and she had fallen for this guy in her office. He belonged to a respectable family and they seemed to like her too.

I: So what is the problem, why don’t you go ahead with this relation? Are your parents against it?

Pooja : No they have always respected my decision so they wouldn’t oppose this relation

I: Then what is stopping you?

Pooja: He comes back as a guy with a laid back attitude. You know how I have been throughout my life always taken my work, education, relations with utmost importance

I: Why do you think he doesn’t seem to take life seriously? Has some event in the past prejudiced your belief?

Pooja: Nothing has happened; just that he has got this unkempt look which is emphasized by his 5 o’ clock shadow (read evening stubble).

I mulled over the discussion, I had always remembered Pooja as being a strong level headed individual who was always clear of what she wanted from her life. Today she seemed to be in a dilemma for the first time as she didn’t find her would be in the same boat she had been till date.

I: Pooja do you love him?

I: Then why don’t you go ahead, it’s just that you need to talk to him and reason it out? He needs to shave twice a day and given his appearance a trim and tidy look. You could –

I saw Pooja off by her car. I hope the New Year ushers the dawn of hope and belief that everything happens for the best.

The message is clear either Pooja’s guy shaves or craves lifelong for her. The choice is his!!

Looks like, the blade has taken an edge in Pooja’s life. 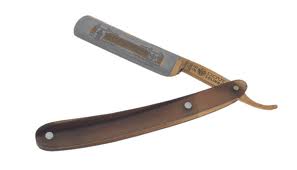 This post is a part of the ‘Shave or Crave’ movement in association with BlogAdda.com