A lone pachyderm stood swaying his tusk and grazing around. I stopped the car and gazed at him. I remembered someone telling me an elephant who roamed all alone was considered dangerous. I wondered if this one would go rampant but soon spotted company behind the tall bushes. They looked great as a group. I was passing through the Muthanga Wildlife Sanctuary from Bandipur to the land of tea, coffee, rubber and spices called Wayanad in Kerala.

Wayanad meaning Vana Nad (land of forests) or Wayal Nad (land of paddy) has many versions as regards its name. It was also called Mayakshetra, the land where King Maya ruled and over the period it changed to Mayanad and finally to Wayanad.

Wayanad is a land of fertile beauty in the hills of the Western Ghats covered in dense foliage. The drive takes you through roads that snake through the hills, peppered with ponds and lakes. As you walk down the streets of Wayanad you find men in white attire of shirt, lungi and head gear visiting the nearby mosques present in every locality. Ladies with head scarves are seen in shacks preparing local food like Kerala Paratha, Pathiri and Kappa (tapioca) delicacies. 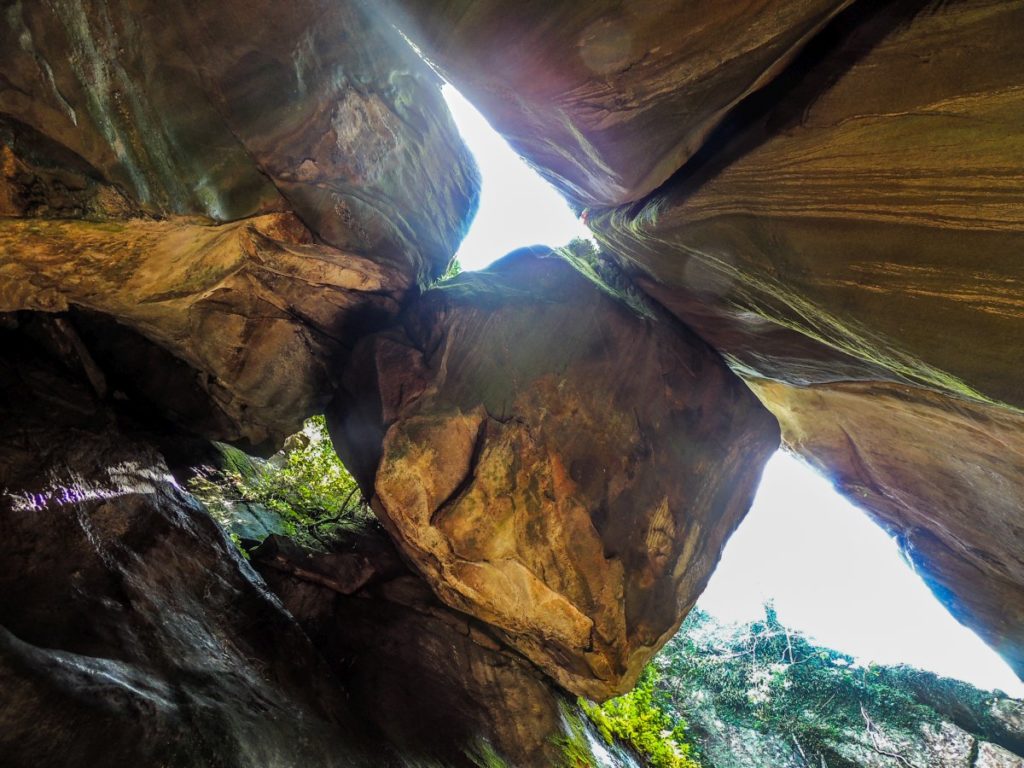 As I made my way to Edakkal Caves I noticed the dark green coffee plantations growing across the vast land. We crossed Sulthan Bathery the place where Tipu Sultan stored his ammunitions to fight against the British. Over the period Sultan Battery got converted to Sultan Bathery which is also well known for its beautiful Jain temple.

The Ambukuthimala mountain range was seen all sprawled across like a lady lying after being hit by an arrow. I trudged from the base of the hill to Edakkal Caves which is within the mountain. The security at the entrance checked my belongings for plastic items and tagged them to ensure I bring them back on my return. Climbing 340 steep steps for an hour left me huffing and sweltering in the warm weather. I reached the top only to be overwhelmed by its sheer size and magnificent etchings. Edakkal meaning stone in between is a stone formation which was founded in 1894 by a British. At a height of 1000 metre the wall engravings made by Neolithic Celts representing humans, objects, animals and culture left me pondering about life in the bygone era.  The earliest surviving writings in southern India are found on the walls of Edakkal. 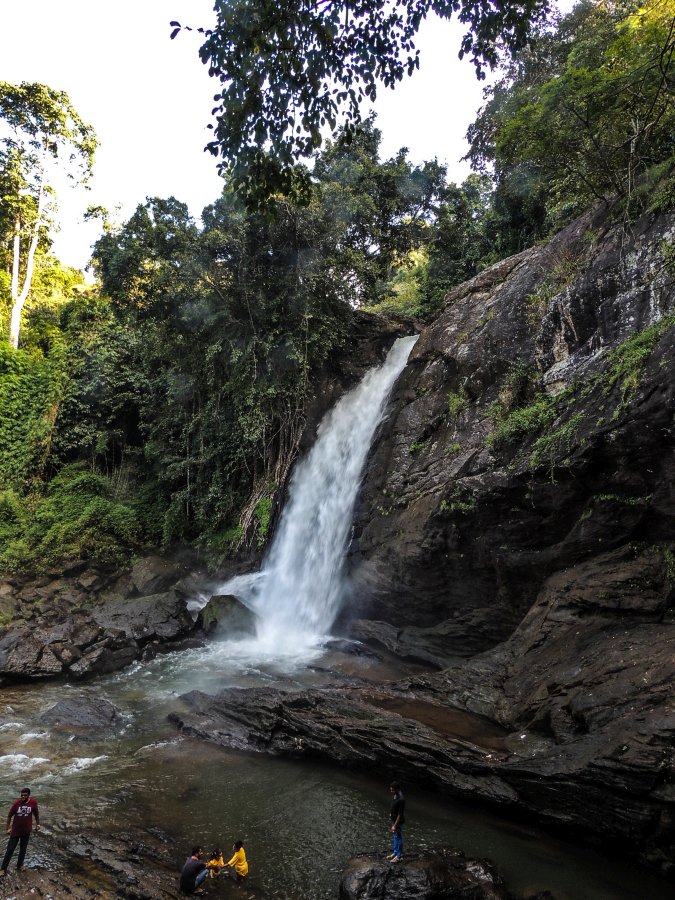 I drove ahead for an hour to reach Meppady and thereafter Soojipara Falls. The cascade gets its name from a nearby rock (para) shaped like a needle (sooji). The trek was downhill through a stony path and finally I saw the torrent pouring like a dream with its mist spraying in all directions. I was drenched and refreshed basking in the fresh mountain air and water. My first day at Wayanad had tired me but nevertheless tickled the explorer in me. 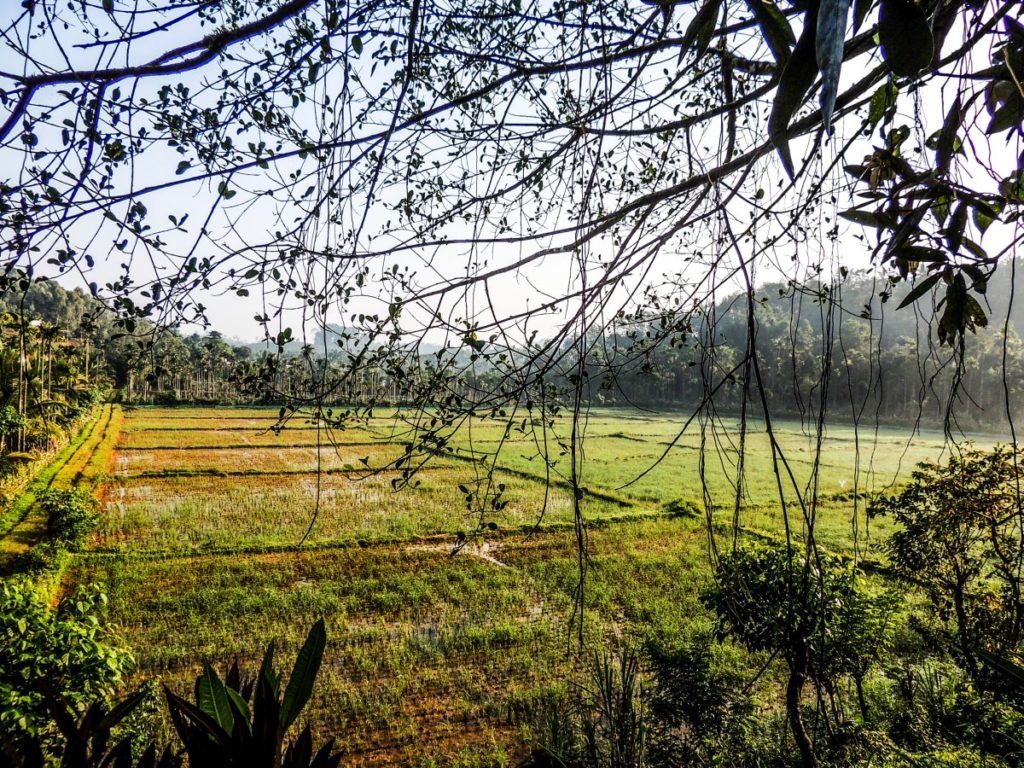 A search for a place to put my feet up took me to the scenic town of Vythiri. I could hear the azaan being played in the nearby mosque. The landscape had changed and the locale had the fresh green tea gardens in its slopes with the pepper vines draped around the erect silver oaks. Every plantation was an abode of spices. As I entered Pranavam homestay I noticed the grass growing under my foot was actually a wild variant of the coriander leaves and it had the same strong odour. Turmeric and Ginger shrubs grew in abundance close to the fence and green chillies hung with a strong pungent odour. Cloves, Bay leaves and Cardamom were found in copiousness throughout the plantation. Walking through the paddy fields and betel nut groves, inhaling the fresh morning air to view the first daylight is an experience that shouldn’t be missed when in Wayanad. Hornbills, Bulbuls, Kingfisher and many other avian are commonly found on these grounds. I dug into some String Hoppers, boiled Nenthram Pazham a variety of banana and finished it off with steamed rice cylinders called Puttu. Breakfast was heavy and authentic Kerala style at the homestay.

Having had my full I left for a village experience to get a glimpse of the tribes of Wayanad. 17 different tribes inhabit this region with Kuruchiya considered the highest caste. The Kuruchiyas are mostly into land dealings, archery and they employ the Paniya tribal as workers. My first stop was at URAVU a NGO which works towards the upliftment of the tribal community by giving them work in their craft workshop at Thrikkaipetta. Various environment friendly products made from bamboo like bags, furniture, handicrafts, utensils and curtains are taught to the locals. This has helped them find a livelihood and also ensured sustainable living. 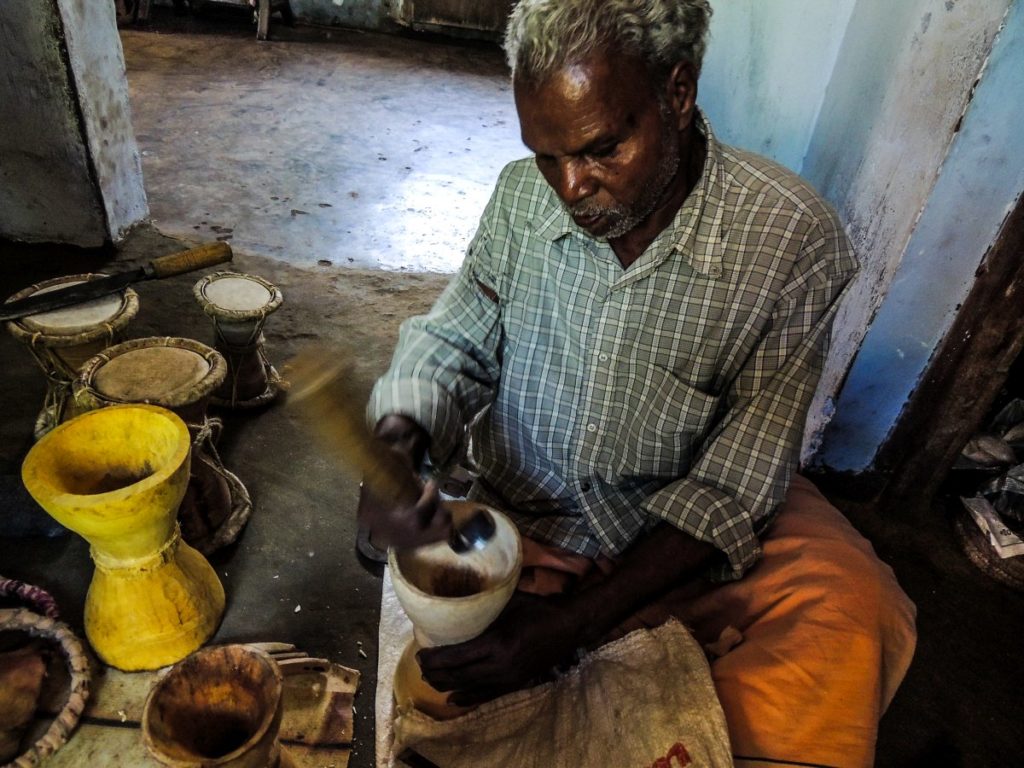 Seeing the beautiful handicrafts in the hands of the smiling locals I moved ahead to Ambalavayal village. Betel nuts were laid out to dry in the courtyard.  I could hear the low pitch of a musical instrument being played as I entered the house of Vellan Moopan belonging to the Paniya tribe. He was busy scrapping the Thudi a percussion instrument. The Thudi is played in funerals and marriages of the Paniya tribe. Made of sheep skin, jackfruit wood, bamboo and latex it normally takes 20 days to make a Thudi. Vellan is one of the handful artisans in Wayanad who has managed to keep this art surviving.

Lunch in one of the local’s home was boiled tapioca with a dash of red chillies chutney and brown rice with fish fry and curry. Fish is found in abundance in Wayanad and is part and parcel of every meal. Rubber Plantations were all around their house with latex being collected from tapped trees. 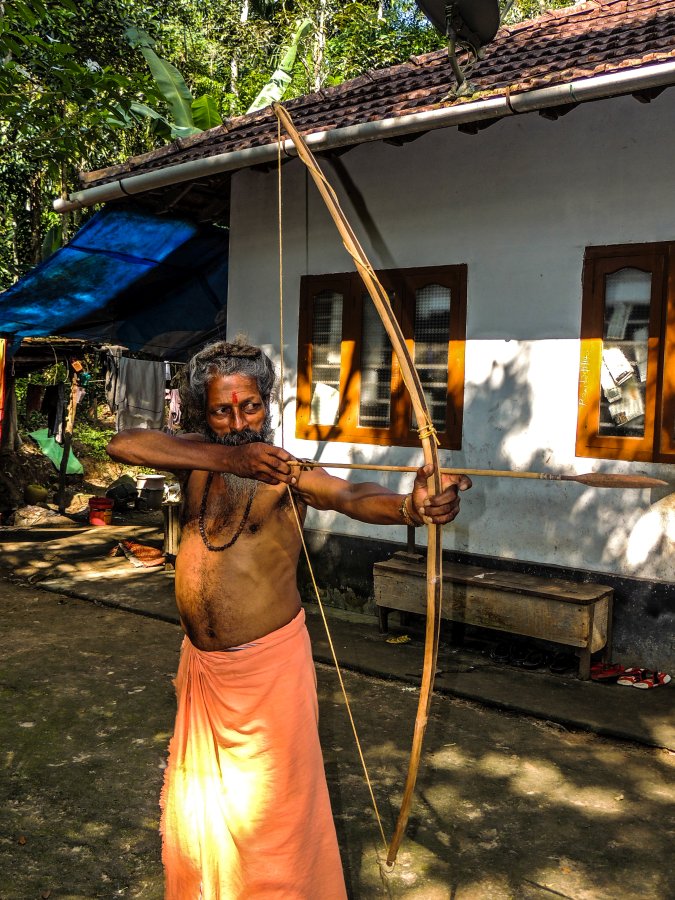 Govindan giving a demonstration of archery

It was time for me to move ahead and visit Govindan from the Kuruma tribe. One look at his belongings which were bows and arrows of various shapes and sizes was enough to tell that archery was in his blood. A keen instructor he tried to teach me the ancient art. After many failed attempts I was content eating the egg fruit he offered me that tasted exactly like an egg yolk.

In those few days in Wayanad I noticed the people of this land had learnt to live in harmony with nature. By cultivating plantations and ensuring the age old art forms do not die the inhabitants had learnt to live a simple yet contented life. Staying in a region that has a rich history of civilization the natives haven’t forgotten their roots and ensured it isn’t lost in the burgeoning modern era. When I queried a native he immediately responded, “These are our jewels and we better protect them before they are lost”.

Well Wayanad indeed has many secrets in store some way too spicy! Go ahead and open the box.

An edited version of this article was published in Complete Wellbeing Septembber’15 issue as Wayanad – Why not?

9 Comments on “Wayanad the spice box”