The ICE (Intercity Express) whizzed through the countryside as we left the tall buildings of Munich behind. The landscape had changed dramatically and the bucolic surroundings were very similar to the ones that I had watched in the Bollywood movies. There were hints of red and yellow announcing the onset of autumn and the cattle festival called Viehscheid.  The decorated livestock descent from their summer alpine pastures is celebrated across the high altitude region of Germany and Austria as Viehscheid.  Across my seat a septuagenarian whose looks wouldn’t give his age gave me some company as he conversed between his catnaps. A resident of Berlin, he was on his way to a village close to Innsbruck to retrieve his broken down campervan.

By the time the train chugged into Innsbruck the overcast skies indicated a wet day ahead. I checked into Nala a quirky boutique hotel in the Wilten district and waited for my guide Andrea Werwitz. A slim lady with a soft demeanor met me at the reception with a warm smile. She asked me if I was suitably dressed to protect myself from the rain, I replied affirmatively having stepped out with a windcheater.  We walked towards the city centre when it had already started to rain but the downpour hadn’t deteriorated the spirits of the pedestrians at the Maria-Theresien-Strasse. A bustling street named after the Empress Maria Theresa it has held historical significance since long. Peppered with impressive monuments like the Triumphal Arch and St. Anne’s Column along with an array of shops and restaurants, the street is the lifeline of the Alpine city. Founded in the twelfth century by the Bavarian Counts of Andech, the city derives its name from the river Inn flowing across it. Innsbruck meaning bridge across the Inn has an old world charm as you pass through the Altstadt meaning Old Town.  After the Andechs died out, the land passed on to the Counts of Tirol and by the fourteenth century, the county of Tyrol had changed hands and was ruled by the Habsburgs for the next 650 years. 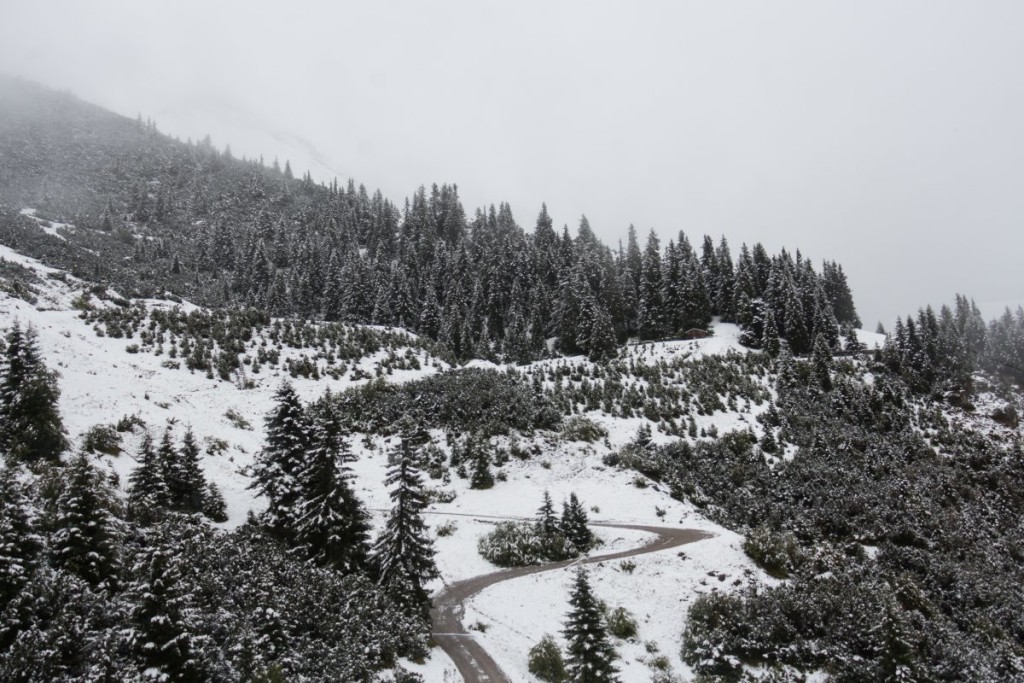 View from the cable car on the way to Nordpark

We took the Nordkettenbahnen cableway to Seegrube and ascended 2000m in less than 20 minutes. The glass gondolas gave away the panoramic view of Innsbruck nestled in the valley. As we gained height, I realised the weather had changed drastically and it had started to snow. This year the mountains had received its first coat of white quite early and the pine trees on its slopes were drenched in silver, giving me a Christmassy feeling. As I stepped out of the gondola, I realised I wasn’t appropriately dressed for the weather but that didn’t deter me from walking on the snow drenched land and soaking in the view. Nordpark lay sprawled like an enchantress tempting the visitors to explore her magic through numerous alpine trails, skiing, snowboarding or downhill biking.  I walked into Seegrube restaurant and warmed myself with a bowl of piping hot soup. 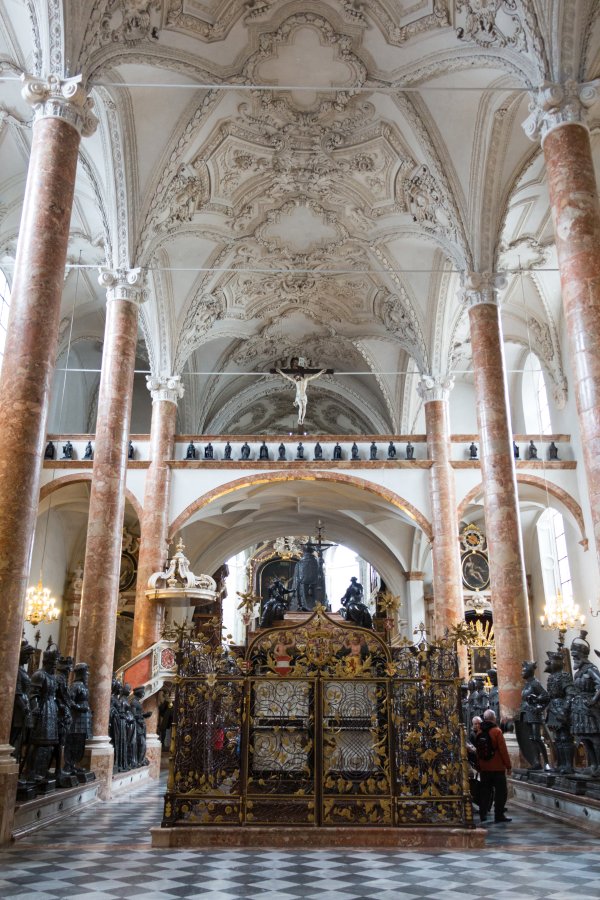 As we returned to the foot hill, we crossed the Imperial Palace that had a huge exhibition depicting the Habsburg cult of death in the event of 250th death anniversary of Emperor Francis Stephen of Lorraine.  But what caught my eye was the Imperial Church which houses the tomb of Emperor Maximilan I. The cenotaph was surrounded by 28 larger than life bronze statues of his ancestors which were made across a span of 80 years. The National hero Andreas Hofer who died a brave death fighting Napolean’s troops is buried in the state church.

I was exhausted after a long day in the rain and snow. Post a bout of fever when in Triberg, Germany I had recovered but couldn’t get rid of the cough. A concerned Andrea took me to the pharmacist and bought me some cough drops which were a respite. We bonded over a cuppa and the famous Sacher Torte at Café Sacher. Andrea talked about her escapades across the globe and her brief visit to Sri Lanka where she had enrolled for a cooking class. She expressed her liking to the humble sambar, a lentil based vegetable stew which apparently she had tried in her kitchen but didn’t turn out well. Being a Tamilian the sambar is prepared at least thrice a week at my place. So I offered to cook in her kitchen the next day if time permits. 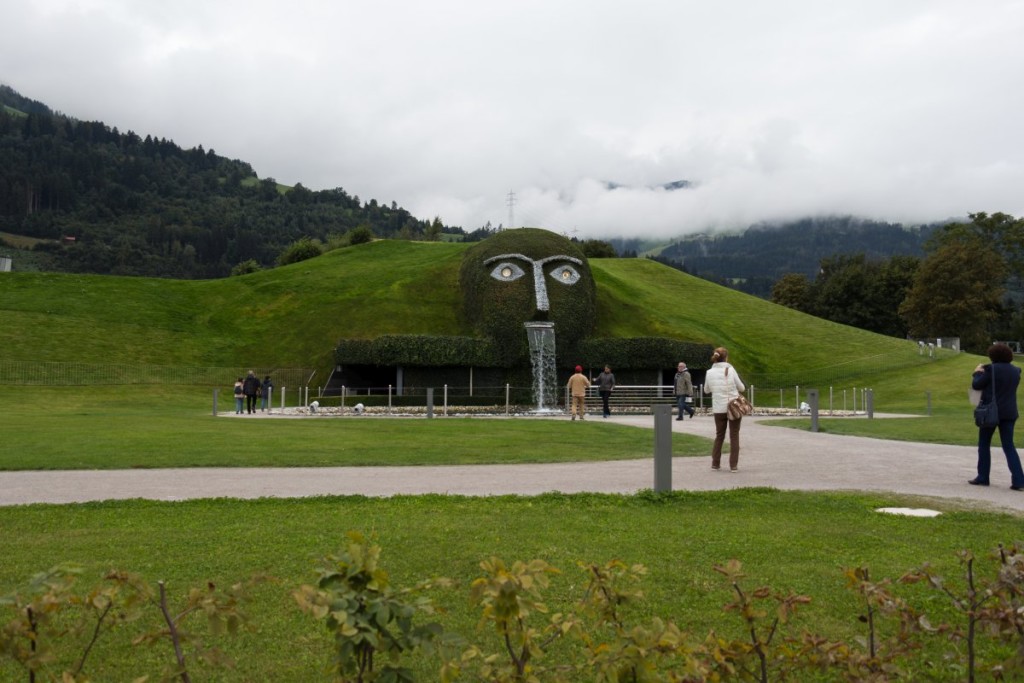 The Giant at Swarovski Crystal Worlds

Following morning after some good sleep and a hearty breakfast, I headed towards the architectural marvel Bergisel Olympic Ski Jump Tower with Andrea. I was lucky to sight a show jumper displaying his skills as he slided down the glide. After a short stop at Grassmayr Bell Foundry Museum and the Ambras Castle, a romantic 16th century castle I headed alone by bus to the Swarovski Crystal Worlds. Daniel Swarovski, founder of the Swarovski Group and a patent holder for a machine to grind crystal stones to perfection has left a rich legacy in the world of crystals. To celebrate the centennial anniversary, Swarovski Crystal Worlds was opened in 1995 at Wattens. The Giant exhibition is awe inspiring as international artists have interpreted and showcased crystal in different forms in its Chambers of Wonder. Tyrol had surprised me with its vast history, culture and innovation. 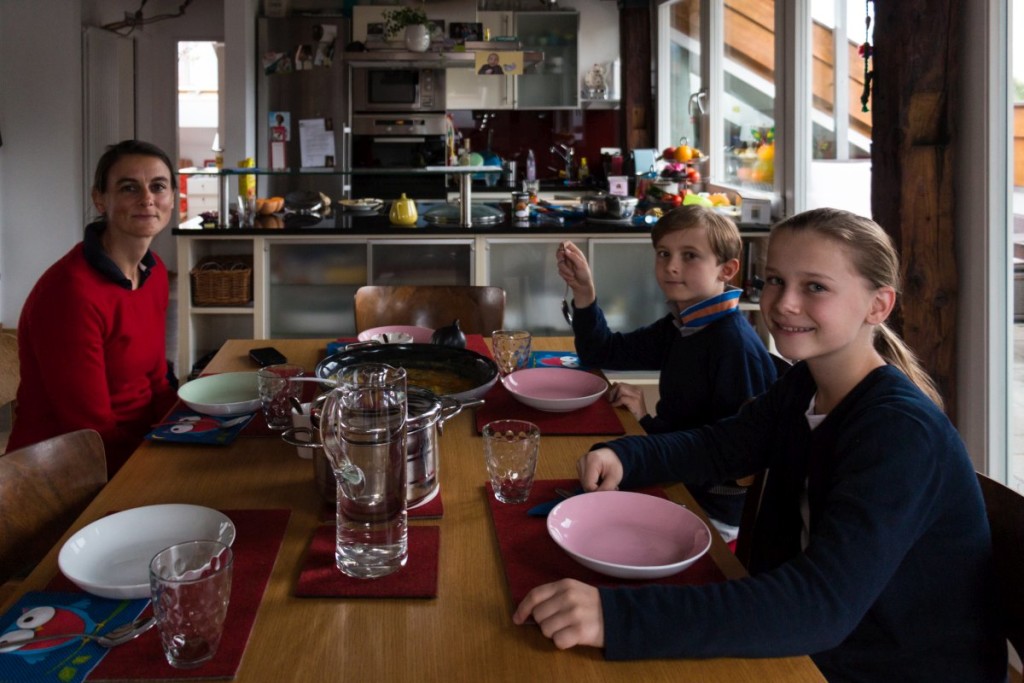 At the dinner table with Andrea and her kids

As I got off the bus I was pleasantly surprised to find Andrea waving at me. She asked me if I was free to spend some time at her place for cooking sambar. I agreed to it but was concerned if she had the right ingredients to prepare the dish.  The quest started from the toor dal (pigeon peas). To make things easy for me she said she had boiled udad dal (black gram) and masoor dal (pink lentil) not knowing which one is actually used in sambar. When I queried for sambar masala the response was negative with an assurance that she had garam masala. I was lost as garam masala was not the stuff to be used and I didn’t have time to roast and grind the sambar masala spices, their availability being another issue.  We headed to the nearest Asian shop and asked for sambar masala to the lady at the counter. She looked through her glasses and nodded sideways, our hearts sank. Suddenly she got up and walked to the corner and returned with a box of Badshah sambar masala, not my brand but as they say something is better than nothing. Andrea drove me to her beautiful abode with bewitching views of the Austrian Alps. As I prepared the sambar I bonded with her lovely kids, a shy boy of 7 and a smart girl of 11. A thoughtful Andrea prepared masala chai the perfect tonic for my cough. As we sat together and had an early dinner of sambar and boiled basmati rice, her husband joined us. Seeing me eat with my fingers, Andrea’s daughter was intrigued.  When I explained the importance of using fingers to eat which are improvement in digestion and a balance in the vital life energies she listened to me intently and followed suit.

As I left the wonderful Werwitz family, Andrea offered to pack me some rice and sambar for my train journey to Vienna the next day. I thought the concept Guests are like God applied only in India but my new Austrian friend proved me completely wrong. While I left a little bit of India at Andrea’s place I carried back home a bag load of memories of Tyrolean hospitality and culture.

An edited version of this article was published in The Hindu as A bagful of Tyrolean hospital in March’16. You can read the same here.

5 Comments on “Of Sacher and Sambar at Innsbruck”