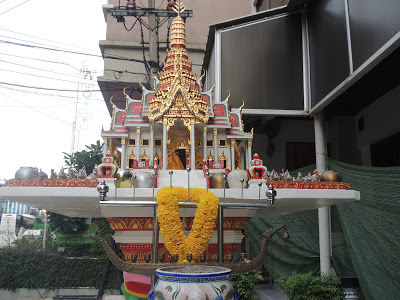 I was intrigued by this structure but couldn’t fathom what is it? I tried checking with the locals but was unable to decipher their language and they in turn couldn’t  converse in English. Finally when I met Noong Noong (our local guide) I found the answer. It is a shrine, shaped like a house and found in most houses, shopping malls and offices across Thailand. This edifice is called The Spirit House. 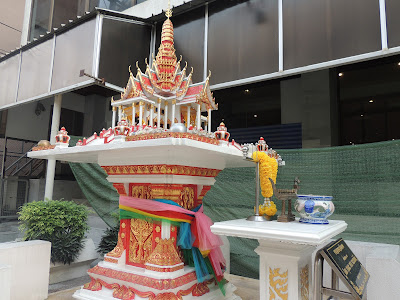 A Spirit House is found in the entrance and is believed to bring in good luck and  charm to the residents. Hotels, restaurants also have specific space allocated to this beautiful edifice. It is said one has to pay respect and homage to the good spirits on this land. If anyone fails to believe in and or pray the good spirits  evil might befall on them. These spirits are considered the guardians and the angels of this land. They are here to protect us from the negative energies surrounding us.

These structures are decorated with flowers, lightings, mirrors and are made of marble or wood. They are colorfully and tastefully beautified with animal and elderly human figurines. The elders are supposed to guard the dwellers and shield them. They ward of the evil spirits around the natives. Flowers, Fruits and incense sticks are offered in the shrine. Few of the shrines house the four faced Hindu god, Lord Brahma. Hinduism does seem to have an influence in the Land of Smiles. 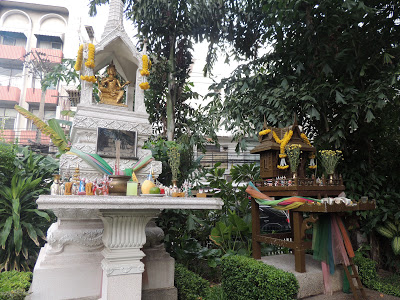