Reaching Vienna hadn’t been easy with the refugee crisis situation in Europe. When I had approached one of the BAHN officials in Augsburg, Germany for getting my European East Pass activated he immediately said, now is not the right time to visit Austria as trains aren’t running on a daily basis. My heart sank despite the fact that I was on my way to the Oktoberfest. I reached out to the officials in the Munich train station. As I stood in the English speaking queue an officer with a demeanour that stated his position moved towards me. I recounted my travel plans and woes of not being able to visit Austria. Without blinking an eyelid he responded “I am not sure who gave you this information but there is indeed no issue in travelling to Innsbruck or Vienna by train. If my twenty eight year old daughter asked me I would gladly give her permission to travel, it is perfectly safe. Currently trains have been stopped only between Munich and Salzburg”.

Being assured by the gentleman I had travelled to Innsbruck and later to Vienna with no hitches barring the frequent passport checks. After dumping my bags in the hotel in Vienna, I had stepped out for a bite and returned in the pouring rain to be greeted by an elegant lady waiting for me in the reception. Ilse Heigerth was my guide for the day and she was to take me around Vienna in the tram along the Ringstrasse (Ring road).  We bundled under her umbrella and sauntered towards the tram station as she recounted the history of Austria.

In the 11th century the Babenbergs arrived from Southern Germany to Austria and ruled for the next 250 years. By the end of the 13th century the dynasty died out and the King of Holy Roman Empire of German Nation Rudolf, a Habsburg took control. The Habsburgs monarchy spread across parts of Slovakia, Bohemia, Czech Republic, Ukraine, Northern Italy, Romania, Poland, Croatia, Slovenia and whole of Hungary. They ruled for the next 650 years with Vienna as its capital. In 1852 Francis Joseph I, the Austrian emperor decided to tear down the fortification walls of Vienna which were built to protect the city from the Hungarians and the Turks. Wien then was spread across a small territory with 50,000 inhabitants and comprised only of the 1st district. The city hadn’t seen any invasions for some time and the Emperor found the need to build an imperial boulevard, the Ringstrasse around the quarter with important Catholic representation buildings along it. It took half a century to complete the work and by then Vienna had started to explode. Placed like a spiral the districts of Vienna increased in number to 23 with 2 to 9 bordering the outer districts. Today despite being a capital city, Vienna has a cosy atmosphere that is lively and infectious. It is rightly named the world’s most liveable city by Mercer in 2015. “We work a lot but we also celebrate life,” exclaimed Ilse, a true Viennese. 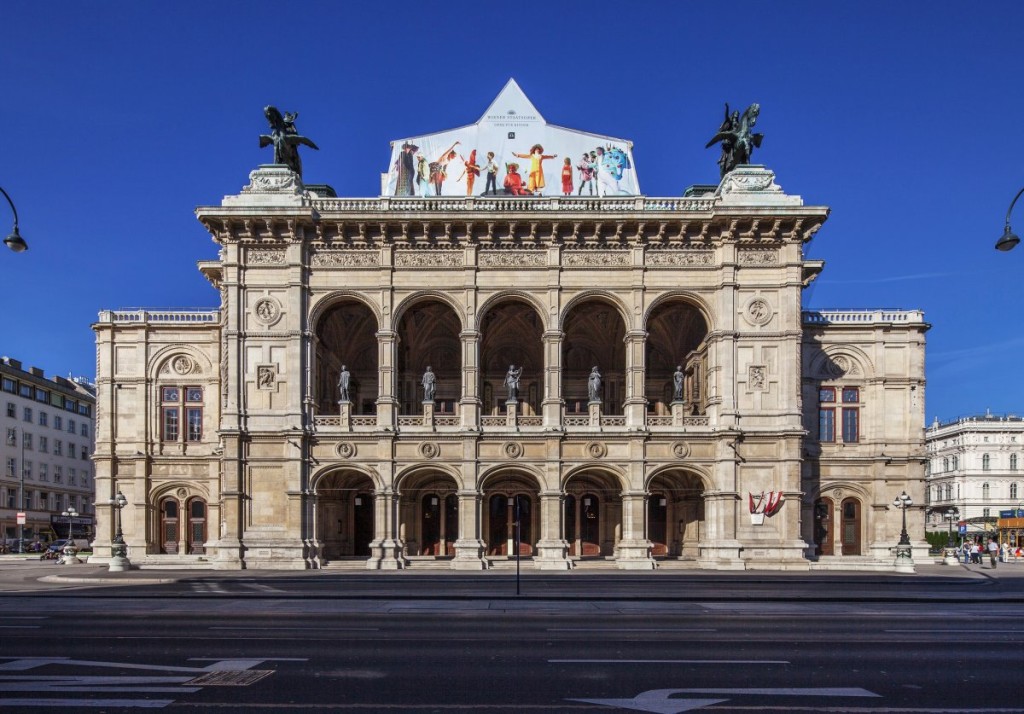 As we reached the Oper tram stop we took the traditional tram that rambled along the city centre. The Opera House stood majestic with a huge screen on one of its outer walls for live public broadcasting of performances. It was the first public building to be opened up for the citizens in 1869. Destroyed badly in World War II the building was rebuilt and refurbished in its original style. The hall and the stage were modernized and the Vienna State Opera was reopened in 1955. When in Vienna one must definitely watch a scintillating performance onstage, it’s worth every penny. 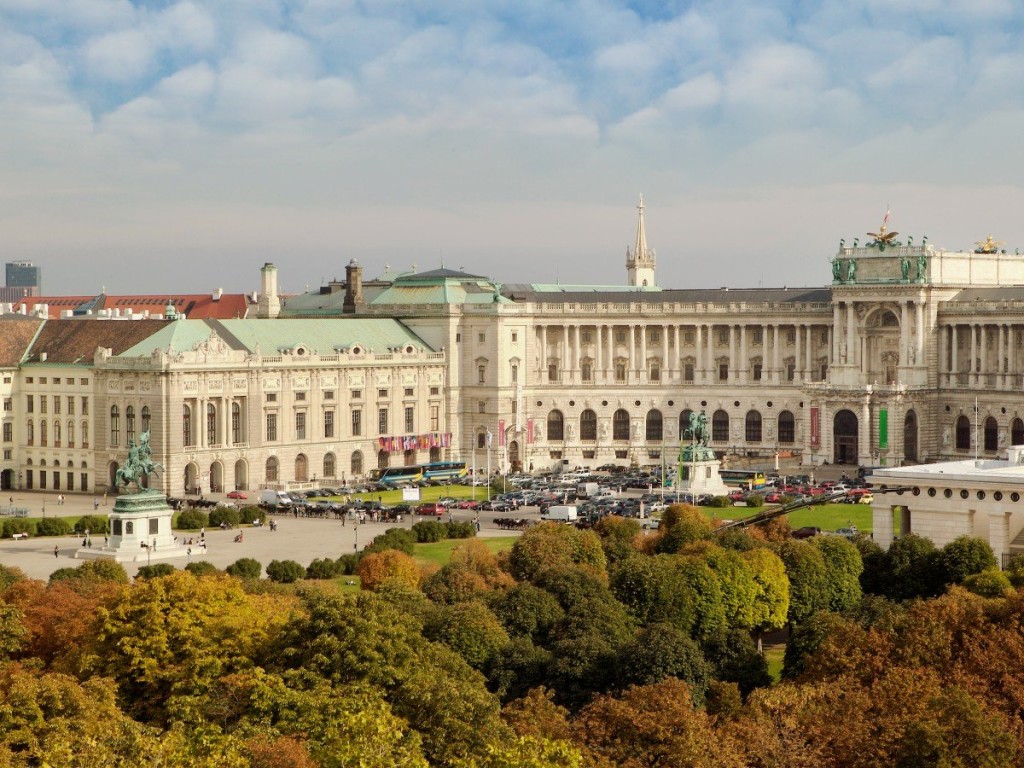 Not far was the Imperial Palace surrounded with the luxury shopping area in its fringes. Purveyors for the royal family settled in this area and were allowed to wear the coat of arms in their outlet. The palace grew in size over the centuries as new wings were constructed in different styles. The newest wing to be added was in 1913; today the palace houses the office of the President of Austria and also is an important Congress centre. 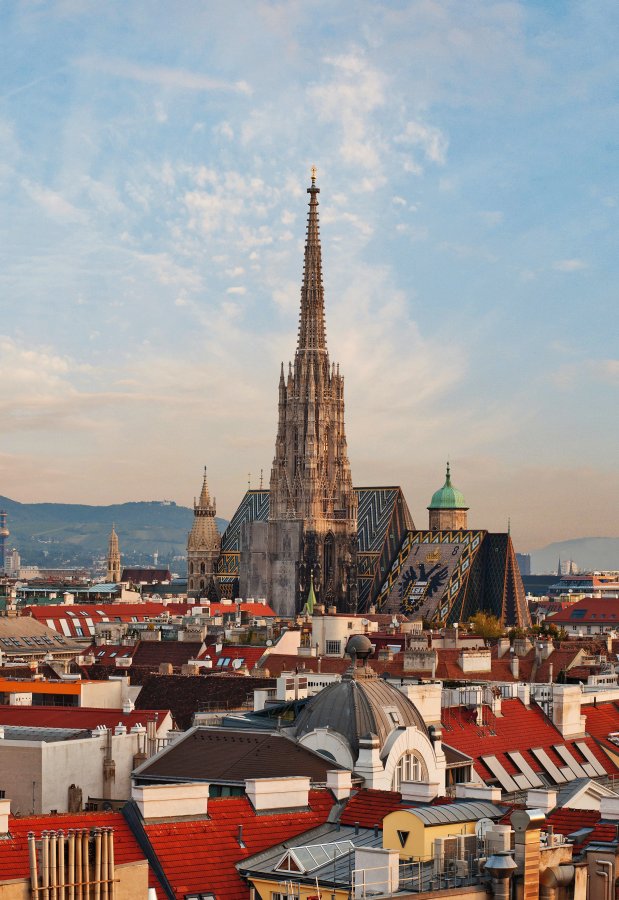 Most of the important edifices in Vienna could be seen between the Opera House and the University. The Museum of Fine Arts and Museum of Natural History were seen at a distance. Little remnants of the past stood as evidence of the ramparts that once protected the city. We crossed a huge monument that looked like a Greek temple. But I was in for a surprise when Ilse called it the Parliament. As democracy originated in Greece, the architect Theophil Hansen decided to give it a classical Greek look, reasoned Ilse. The seat of the mayor or the Town Hall at Rathausplatz looked like a church. The open space in front of it is used for parades, celebrations during festivals and also for the famous Christmas Markets.  But what caught my eye was the spire of St. Stephen’s Cathedral in the heart of Vienna. An important landmark and a national identity was built as a small church in the 12th century but soon burnt down. The second Roman cathedral built was bigger than the first. Between the 14th to 15th century it was rebuilt again as there was a need for a diocese. It was the Gothic era when the impression was the higher the nearer to God. The South tower was built 137 metres high and by the year 1450 work started in the North tower. But by then they fell short of funds and it was Renaissance era when humanism was most important which led to the stoppage of work in the North tower. During the WWII the roof of the church was destroyed and was rebuilt with colourful Bohemian tiles. Made of sandstone the cathedral houses the tombs of many royals, cardinals and archbishops. On New Year’s Eve the bell in the North Tower rings 12 times and the Blue Danube is played in the radio and television. The Viennese waltz into the new year to the tunes of Johann Strauss’s masterpiece. “It is played more than our national anthem,” exclaimed Ilse with pride in her voice.

A night scene across the Danube Canal

We passed by the glorified Danube canal, the river which had many tributaries some 2000 years ago. Its flow was regulated in the 16th century with one arm close to the city centre. In the 19th century the main course was straightened and a new bed built to avoid flooding. Come summer artificial beaches, pubs, bars and restaurants are set up near the canal. It is the most happening place for youngsters with live music concerts.

Dawn of a new era

We had reached Schwedenplatz tram station, an important traffic hub in Vienna. Traversing Vienna in a tram is fun as you get to hop on and off and explore the city at our own pace. We changed trams and headed towards the southern part of the city centre. During WWII the Red army attacked Vienna and gained control of the first district. The aftermath of heavy firing and bombing was that the southern area of the city experienced maximum damage and got destroyed. Later new buildings were erected around Schwedenplatz and till date the Viennese continue to change its skyline for a better presence. As I continued to soak in the Viennese surroundings, I noticed the unique architecture of the Austrian Savings Bank. It was Eugon or Art Nouveau construction which had flourished between the 19th and 20th century. The artists in this period split from the conservative form and brought modern thoughts, influences into their art. Renowned Austrian painter Gustav Klimt of The Kiss fame belonged to this movement. 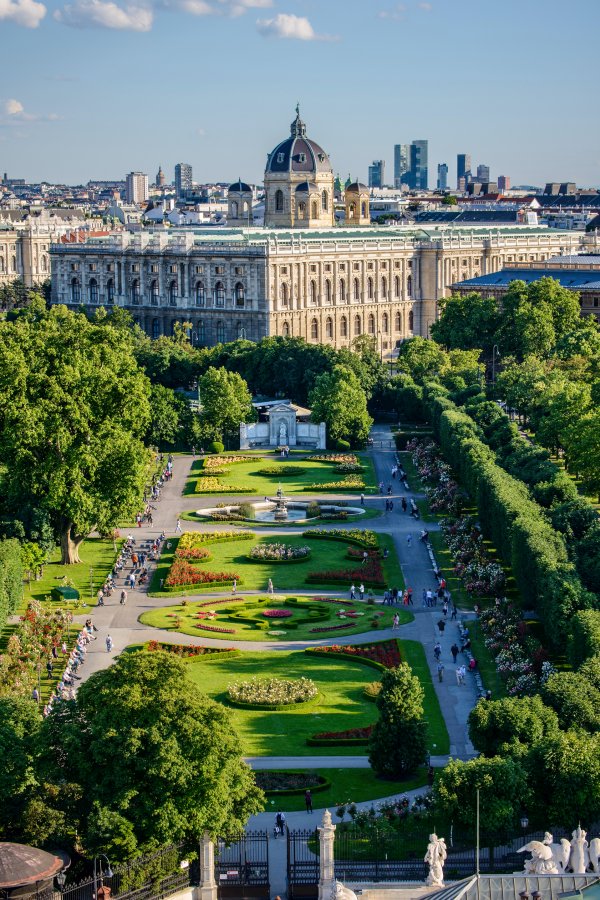 Museum of Natural History beside the city park Volksgarten

Vienna is not just about monuments but also has a considerable green area. The Stadtpark with huge English landscape gardens opened in 1863 for the public. The park has statues of music composers Mozart who moved to Vienna when he was 25 and Beethoven who lived in the city for 30 years. Wien is indeed unique in its own way as she brings the past and the present together yet both thrive in co-existence. It is a marriage of old and new that live in harmony. The 150 year old boulevard is a necklace that celebrates life and narrates stories of valour, culture and art across centuries.

We had returned to our base at Oper tram station. I was on the lookout for a traditional Viennese coffee house when Ilse suggested the Cafe Griensteidl near the Hofburg Palace. She asked me how long I would be in Vienna, I drew blank. I was busy digging into the chocolate cake and sipping my cuppa when I heard the Blue Danube in the distant. I looked into Ilse’s eyes, wasn’t it time to waltz?

Jet Airways has daily flights to Brussels from various cities across India. From Brussels you can take our codeshare partner Brussels airlines to Vienna.

Gasthof Schneider-Gössl is a family run hotel with a cozy wine tavern and not far from the city centre. Alternatively you can stay at the Alma boutique hotel which is located behind the bustling Schwedenplatz. If you don’t mind splurging, a stay at Hotel Imperial is highly recommended which is frequented by most international politicians.

All images in this article are courtesy Vienna Tourism Board.

An edited version of this article was published in Jetwings International in-flight magazine in April’16. You can read the PDF here.