Chettinad doors to a faded glory 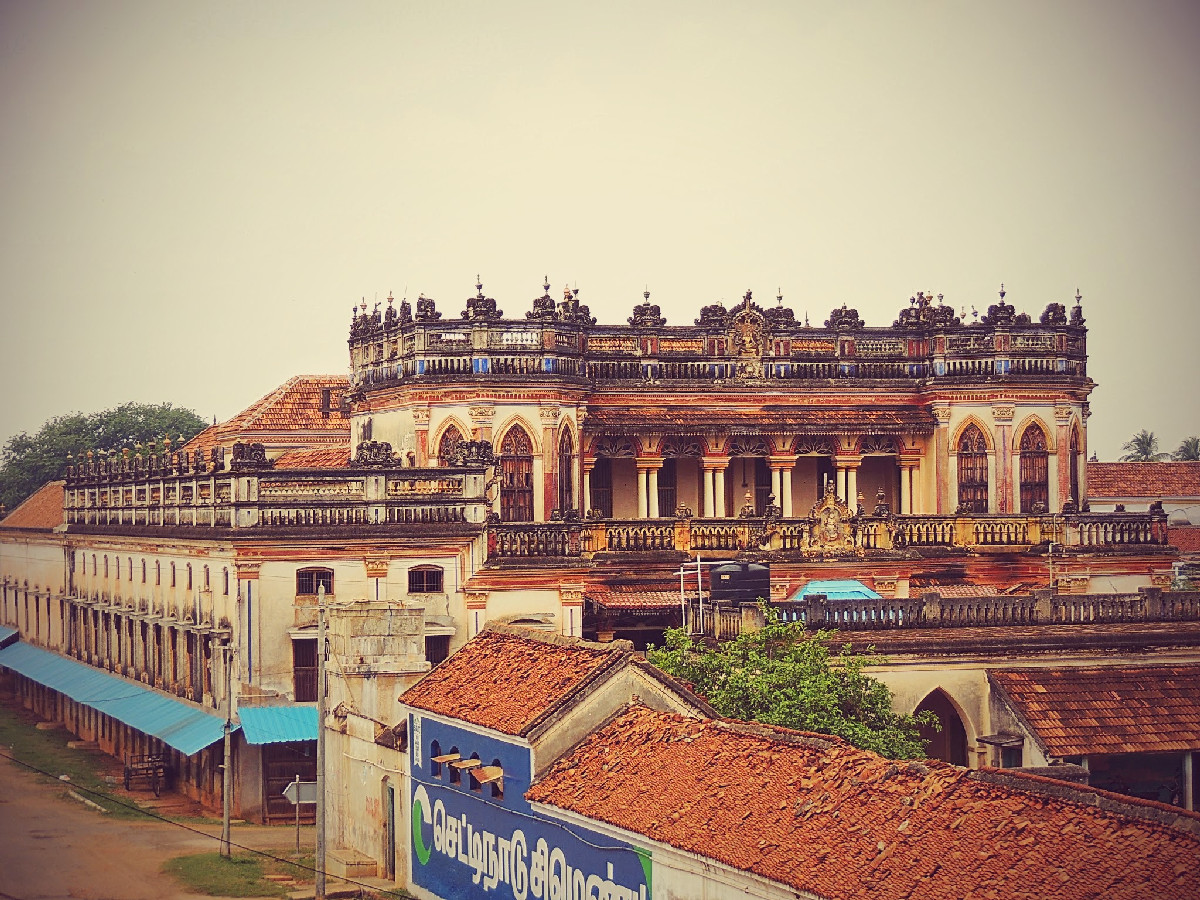 A beautiful Kolam (Rangoli) welcomed the visitors to one of the few surviving Nagarathar or Nattukottai Chettiar’s mansion. I stood outside its gates and was awed by the magnificent structure. The stucco work of Goddess Gajalakshmi in the façade symbolizing prosperity and the fortress like walls greeted me. I had arrived in the arid land of Chettinad, to explore its rich history of art and culture. My search had led me to the Nagarathar homes with a unique architecture which is indeed a blend of South East and European style. 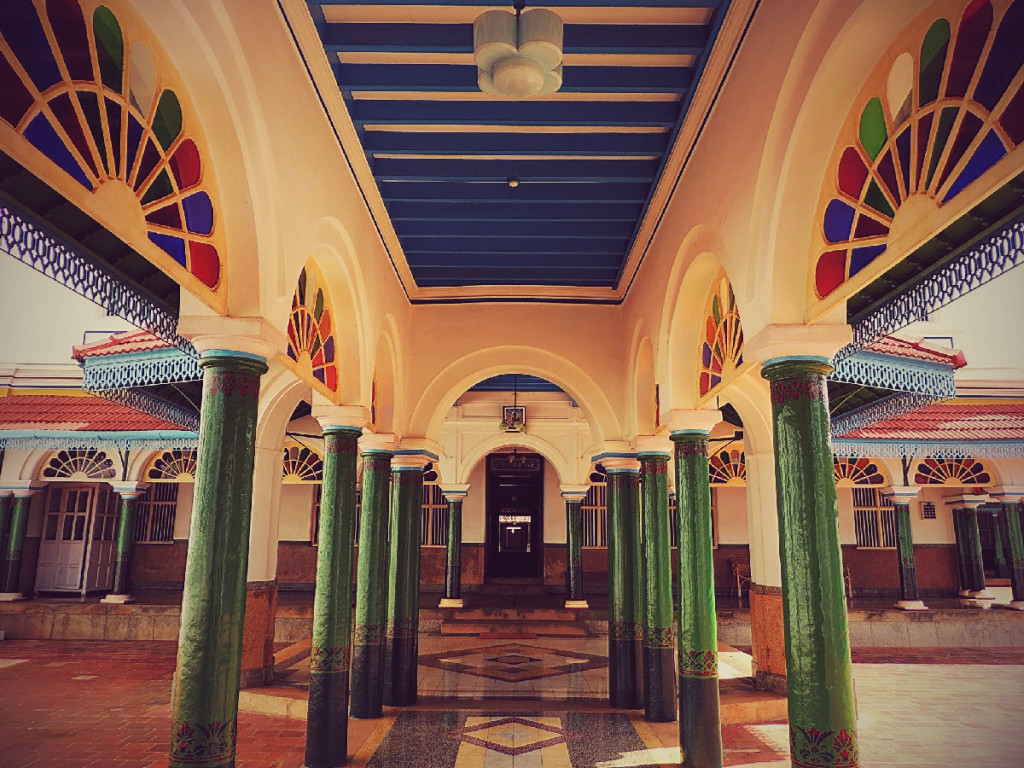 Chettinad in south east Tamilnadu comprised of 96 villages of which 75 villages have lasted.  The Nattukottai Chettiar’s are Saivites (Shiva devotees) and are each tagged to one of the 9 clan temples in the region. The area is dotted with numerous temples, well known being Pillayarpatti, Vairavampatti and Nemam some almost 1000 years old. Temples of Ayyanar or the guardian deities are found in the outskirts of the villages with bright terracotta horses. The locals believe Ayyanar’s are guards who ride steeds to protect the villagers. Their houses which are as old as 150 years speak of a grand lifestyle, huge joint families and an era of rich customs, traditions that were religiously followed. 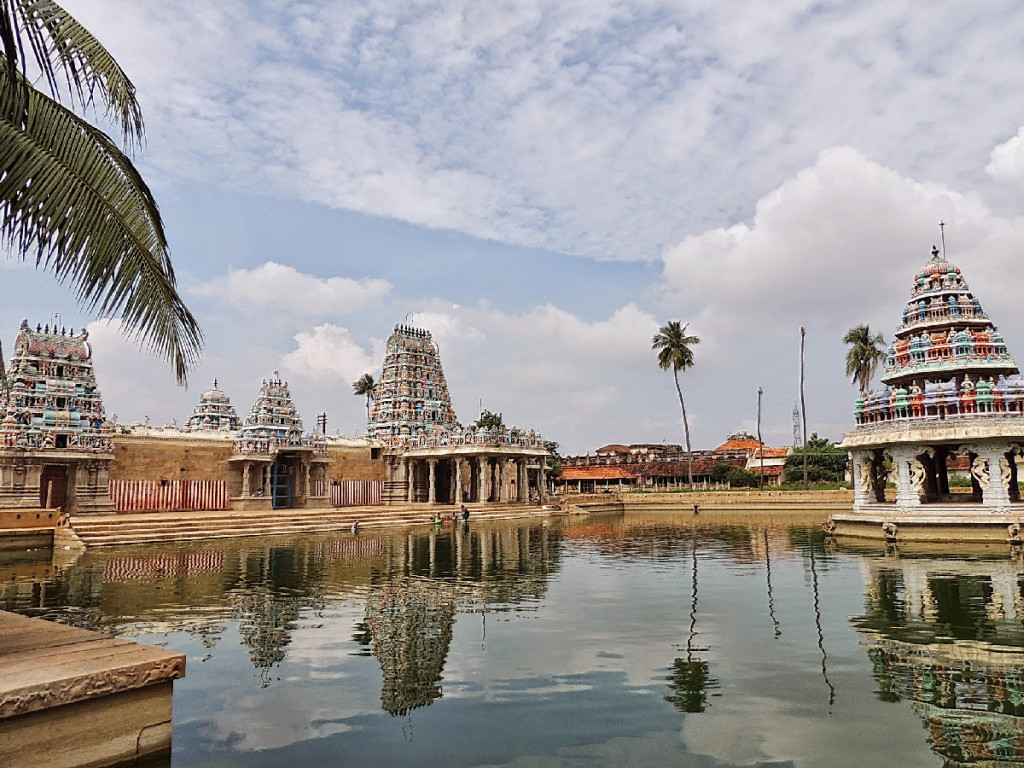 The Nagarathars were money lenders and traders who flourished during the colonial era. Trade took them overseas to the likes of Burma, Vietnam, Singapore, Malaysia, Ceylon and other South East Asian countries. When they returned home they brought back the best Burmese wood, Belgium Glasses, Spanish Granite, Italian Marble, Japanese ceramic and Enamelware from Czechoslovakia. These items adorned the palatial houses of the Chettiars which extended from one street to the other echoing a resplendent existence and life of riches from birth to death. 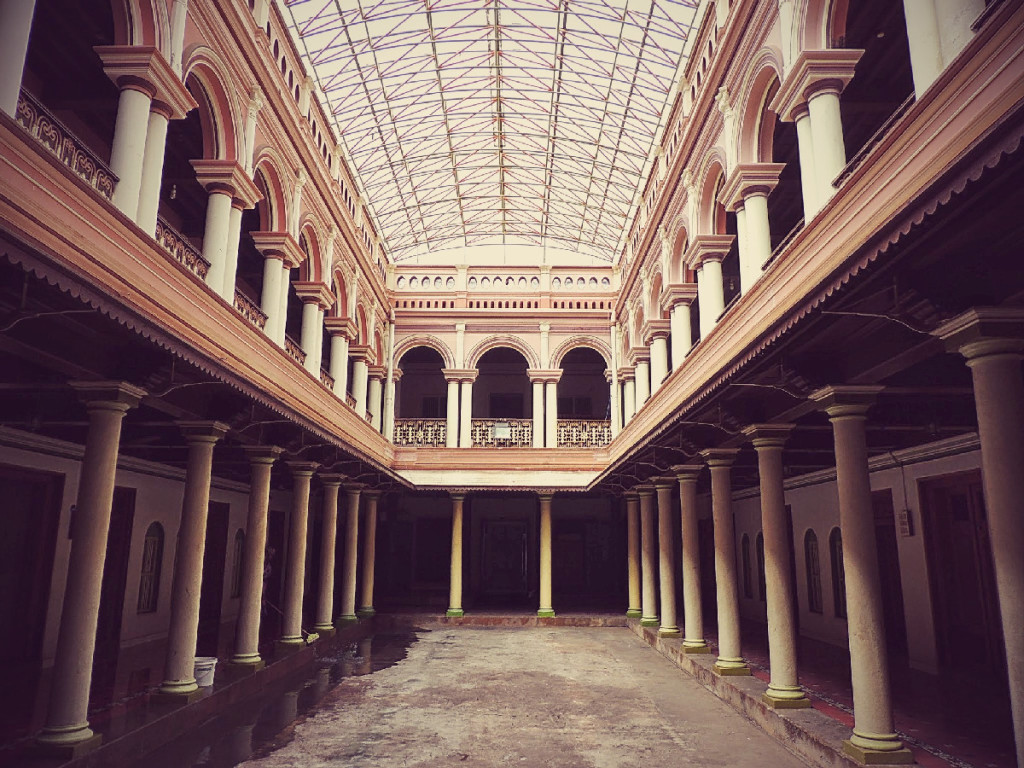 I entered the mugappu or the entrance area of one such house which had arches with stained glasswork from Belgium and granite pillars from Spain. The verandah or thinnai was used to welcome guests. The ceilings had the most innate ornamentation with teak, satin wood and copper used lavishly. A huge Burmese wooden door with intricate carvings and animal motif brackets stood in front of me. As I tried to push open the door it refused to budge given its weight and height. On entering the house I noticed it was divided into four different portions or Kattus with valaivu or courtyards. Each valaivu was surrounded by numerous rooms used for storage, prayer and living. The first valaivu was used for living, second for dining, third served as a kitchen and the last was for rearing cattle.

The pillars of the house were made of teak wood and when I embraced one I couldn’t hold my hands such was its size. The walls gleamed white with a plaster of lime, egg shells, gallnut mixture to keep the house cool in the soaring weather. High ceiling houses with more than sixty rooms and the backdoor opening into the adjacent street the term grandiose would be an understatement. Open spaces with enough ventilation, the houses were built to keep them cool in warm weather.  These palatial houses are told to have teak wood to the tune of 300 tonnes reflecting a life of opulence and stateliness. 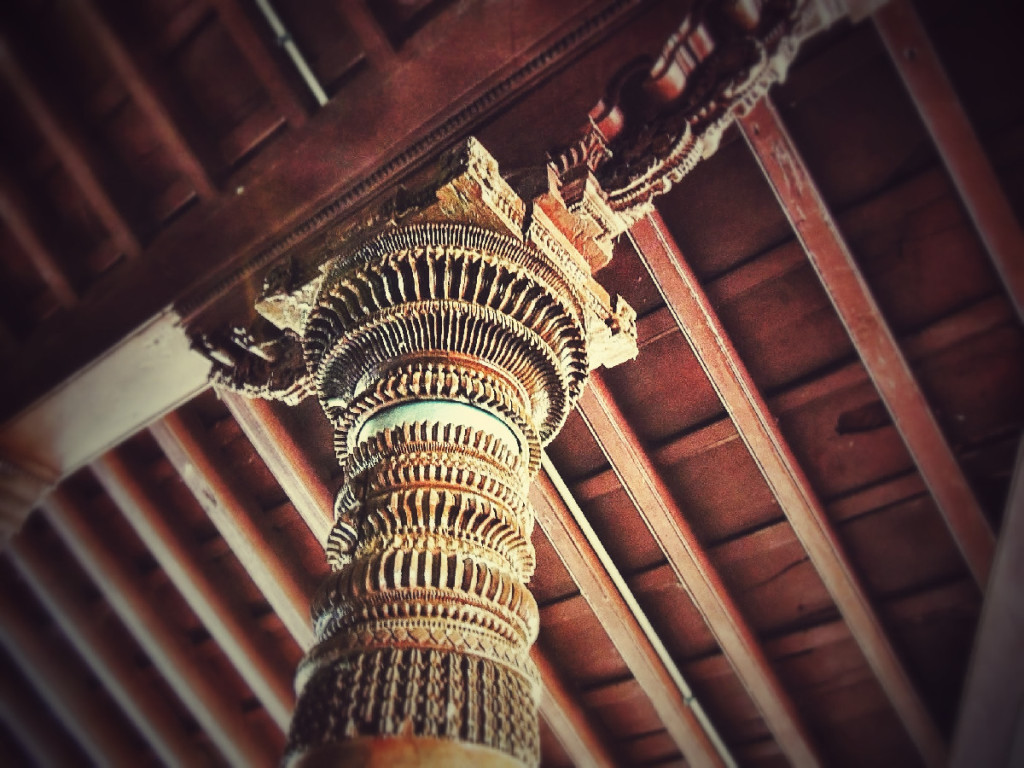 Sadly today most houses are in a state of disrepair with the owners having travelled to the western countries or to the metros for new roots. As I walked into the dusty streets of one such village I found a house pulled down to rubbles. Multiple owners, soaring expenses have led to the houses being demolished and the artefacts being sold in the antique market. Today this legacy lives and breathes in the crumbling mansions managed by caretakers and used by the owners once in a while for a marriage or a family get together. Some are given on rent to filmmakers for immortalizing them in reel. 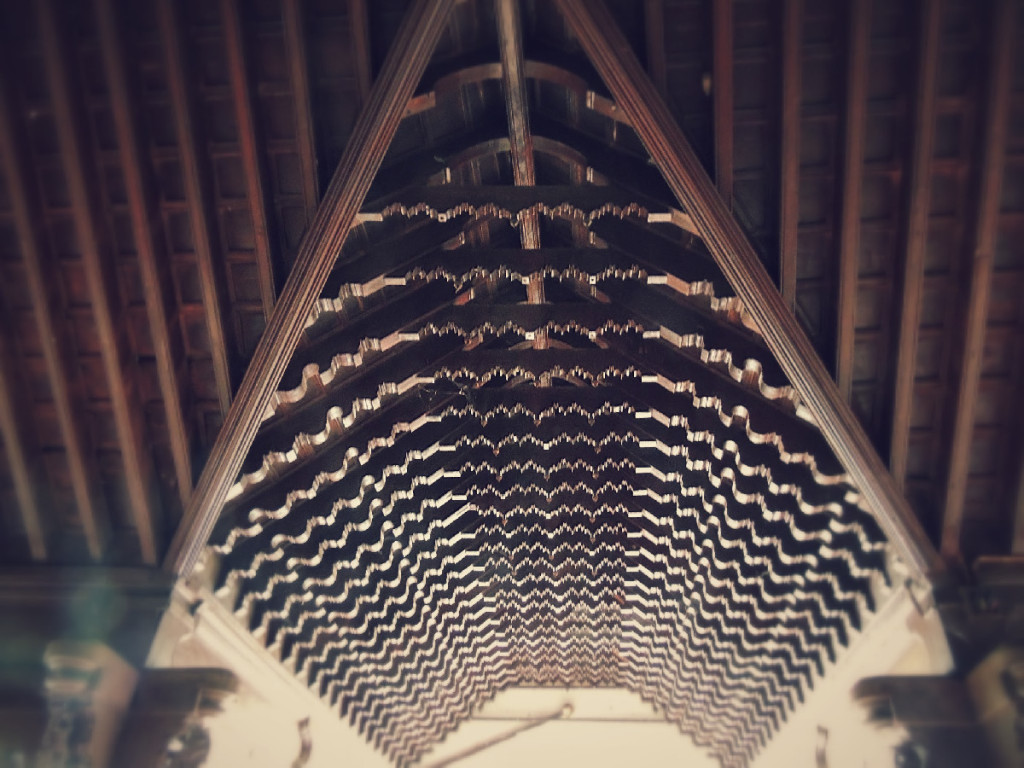 Having visited few Chettiar mansions I walked into The Bangala a heritage hotel in the heart of Karaikudi city, a major town in the Chettinad region. A 100 year old mansion with a rich Chettinad history it is the place to be when you want to experience authentic Chettinad food and its hospitality. Monochrome pictures of the bygone era showcasing Chettiar culture and kitchenware given in a Nattukottai Chettiar marriage by the bride’s parents were on display. A pool to dip in and cool my mind and body, planter’s chairs made of Burma wood for relaxation, The Bangala pampered me and ensured my stay was comfortable.  A banquet hall for an elaborate multi course yela sappadu (meal in a plantain leaf) with Vella Paniyaram, Aapam, Banana Flower Vadai, Parupu Urundai Kozhambu, Pepper Chicken, Quail, Prawns Fry and Meen Kozhambu (Fish Curry), The Bangala spoils you for choice. If you are satiated with the gastronomic journey you ought to be a part of the Chettinad Cookery workshop conducted by chef Karuppiah for genuine Chettinad recipes. Mrs. Meyyappan, co-author of The Chettinad Heritage and The Bangala Table books makes sure every guest is taken good care of at the hotel. 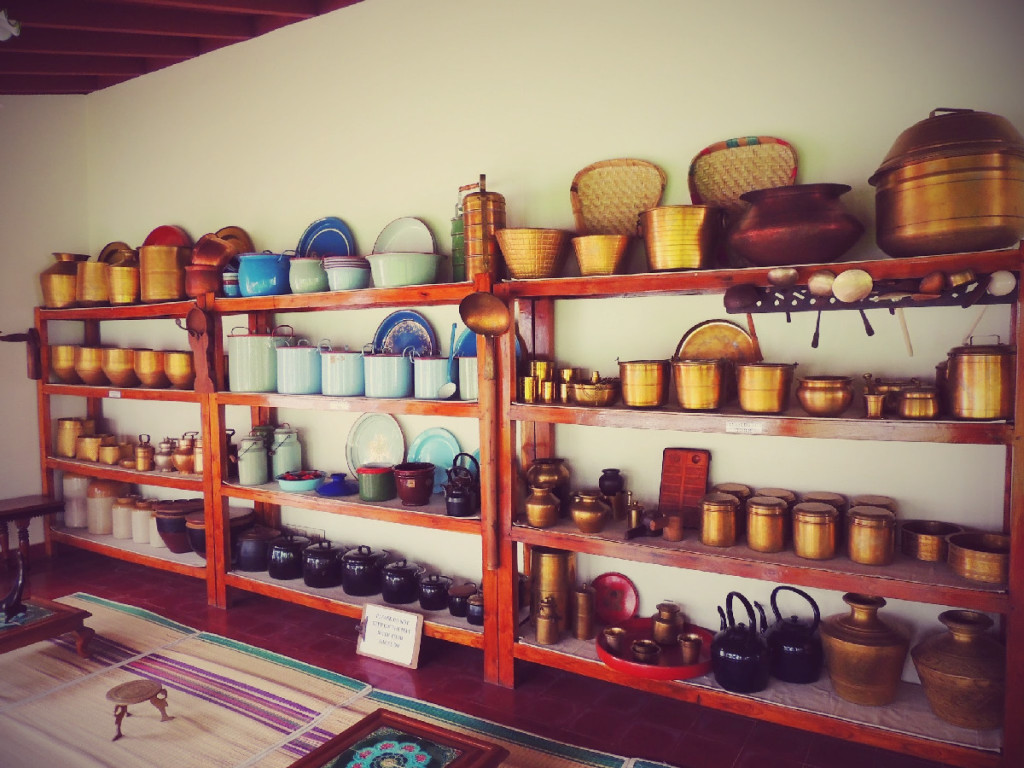 Chettinad Kitchenware in display at The Bangala

After a heavy lunch I strolled into the by lanes of the city. The rhythmic sound of a weaving loom was heard in the distant. I walked into the house to find Tamilchelvi working on a loom weaving the vibrant cotton Kandangi saris with bold checks and temple borders. Kandangi saris were worn by the Chettiyar women without a blouse or petticoat and twirled around the body such that the pleats were at the back. The garment is thick and hence long lasting but also ensures breathability. A riot of colours the motifs are captivating and behold the eyes for long.

A cornucopia of art Chettinad amused me with its treasure trove. My quest for the Chettinad handicrafts took me to the quaint Ariyakudi village. Madhavan was busy filing a brass lamp used in most households for puja and religious gatherings. Chettinad is well known for its decorative brass and white metal villaku (lamps) in various designs like the Paavai Villaku, Lakshmi Villaku and the Yaanai Villaku. At the Athangudi village I attended a short course on tile making. The red soil found in this place is mixed with cement and coloured oxides to make slurry. Few strokes of this mixture by the artisan on a glass tile followed by a filling of cement and sand the tile is ready to be cured in water for couple of days. Cured tiles are then sun baked for a week. The glass tile is then removed after which it is good to be used for flooring. Traditional patterns, geometrical and floral designs in varied colours; this handmade tile gives the modern tiles a run for money in terms of beauty and durability. 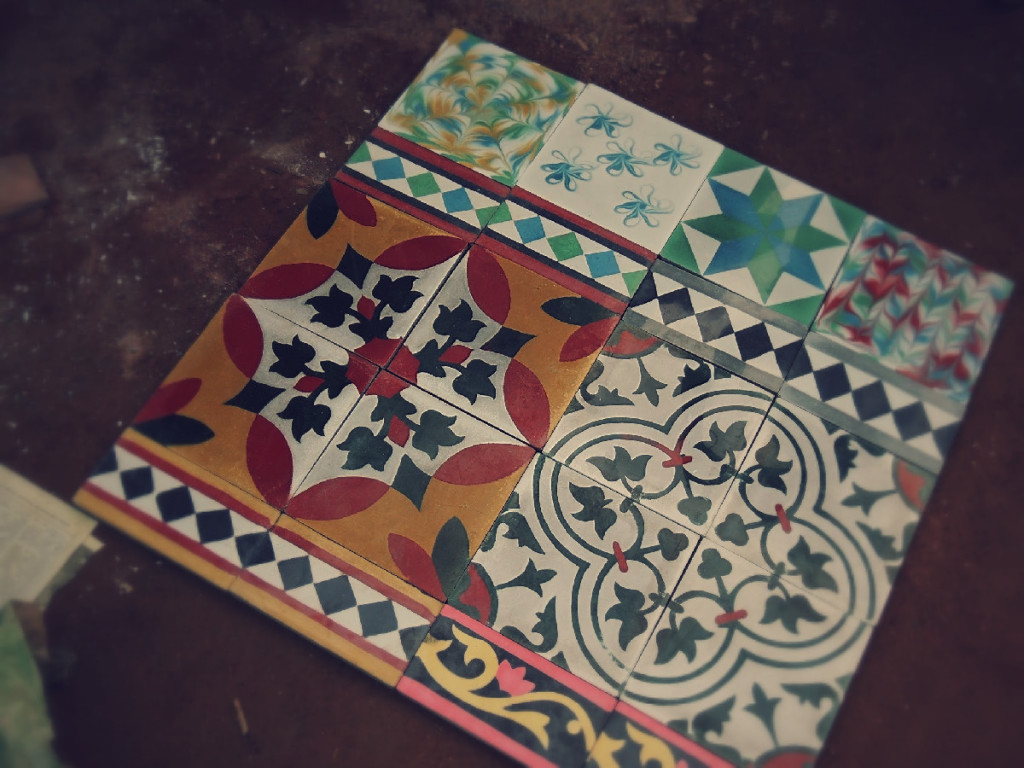 Chettinad is a warehouse of crafts that is very unique to this place. A short drive from Karaikudi took me to the picturesque village of Keelayapatti in Sivagangai district. Women were seated in the doorstep of a house converted to a workshop. As their tongues wagged nonstop so did their hands, weaving colourful Kottans or palm leaf baskets. The women of Nattukottai Chettiar’s fondly called Achis would weave these baskets at home in their pastime. This art was found dying until 12 years back Mrs.Visalakshi Ramaswamy revived it by training the locals and also providing them a means of livelihood. Today five centres are operated across the villages in Chettinad and the icing in the cake is the fact that it has the UNESCO stamp. 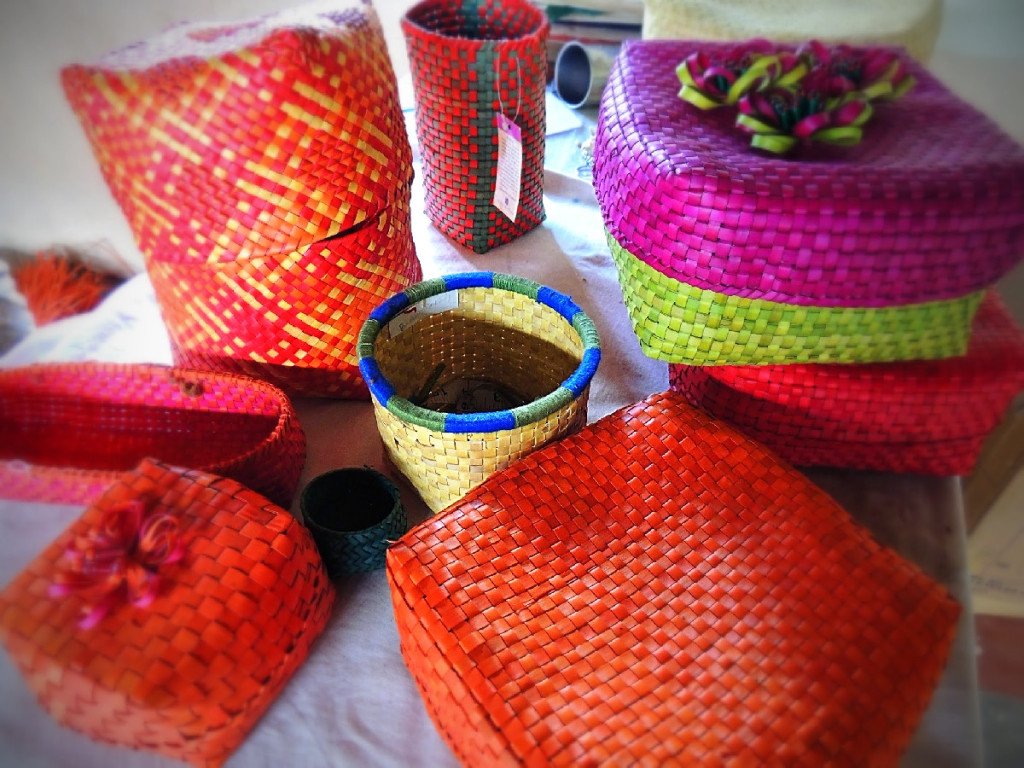 There are many stories buried deep within the Chettinad heritage. Men die but they leave behind a legacy. Nattukottai Chettiar homes might see the day of light like the Kottans, until then the doors to this dying legacy would be closed, hope it isn’t too late!

The Bangala in Karaikudi is the place to be for experiencing the Chettinad hospitality and cuisine. The heritage hotel also has a boutique shop that sells Chettinad handicrafts like Kottan and the Kandangi.  www.thebangala.com +91-44-24934851/ 91-4565-220221

Go on a temple trail to the various temples in the Chettinad region.

Visit the antique market in Karaikudi to sight the objects and artefacts that once adorned the Nagarathar homes.

Sandai, the weekly market in Karaikudi and surrounding villages would give you an insight into the local produce.

Hop across the villages to soak in the lavishness of the Chettinad mansions with nominal entry charges.

Pepper Chicken, Vella Paniyaram are not to be missed when in Chettinad.

13 Comments on “Chettinad doors to a faded glory”