Halebid the jewellery box of India 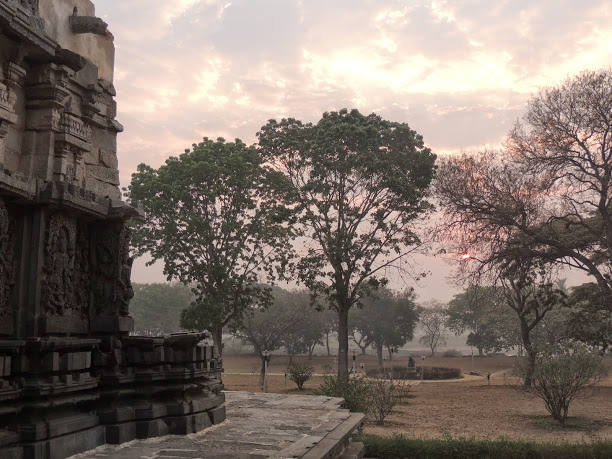 I waited outside the premises of the Hoysaleshwar Temple that had long stood the test of times. A padlocked gate separated me from the magnificent edifice. I had left Chikmagalur in the wee hours of the day and was too early to pay my tributes to this living testament of India’s glorious past. I walked around the small sleepy town of Halebeedu which was yet to wake up to the first morning rays. I was 220km from Bangalore, the state capital of Karnataka and waiting for the doors to India’s architectural grandeur to open.

In a short time the temple authorities unlocked the gate. I looked towards the east and noticed the scarlet smeared sky. The sun was yet to rise and the chirping of the birds was still not heard. I saw the huge structure in the center surrounded by manicured lawns, coconut trees and shrubs. As I neared I was in awe of its stateliness. She stood tall in all her resplendence despite seeing days of adversities. 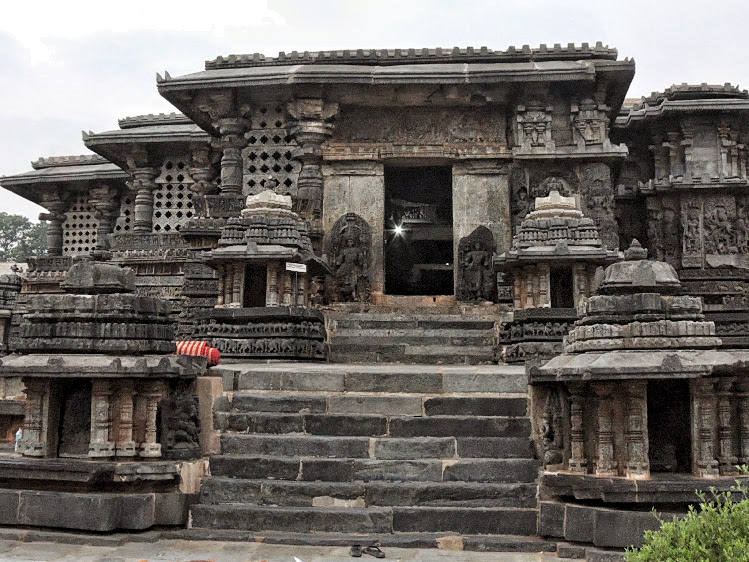 A huge platform in the shape of a star formed its base which is the hallmark of Hoysala architecture. It is told forty feet foundation was required to hold this entire structure. The shrine dedicated to Lord Shiva has two identical temples within its complex. Work started early twelfth century and was completed in the thirteenth century. King Vishnuvardhana who became a Vaishnavite from a Jain is the one to have ordered the commencement of this temple. Despite working for almost a century the temple still has few unfinished portions. The temple is almost similar to the Belur’s Chenna Keshava shrine but the sculptures in Halebeedu are all the more intricate and minutes details have been taken care of. 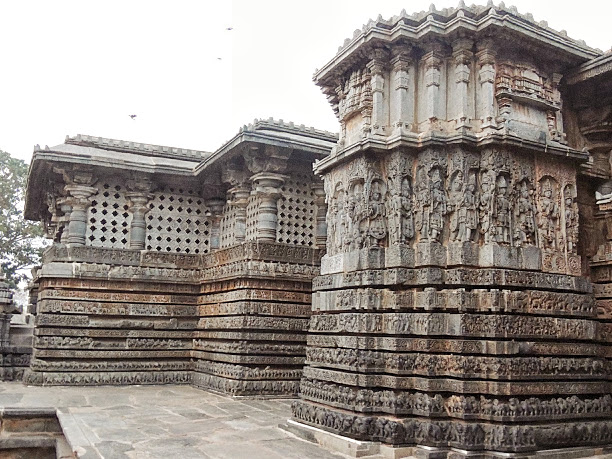 Halebeedu was the capital of the Hoysala dynasty in the early eleventh century. Then it was called Dwarasamudra and was a flourishing capital during its prime days. The Sultans of Delhi attacked the Hoysalas couple of times and carried loads of gold and silver from Dwarasamudra. It is told they struck the shrines as well and tried to destroy them. After effects of these perils could be seen in some areas of the Hoysaleshwar Temple despite which it is still considered the best amongst all of the Hoysala art-forms. Post the ravages this place was called Halebeedu or Halebid meaning the Old City as Belur became the new capital of the Hoysalas. 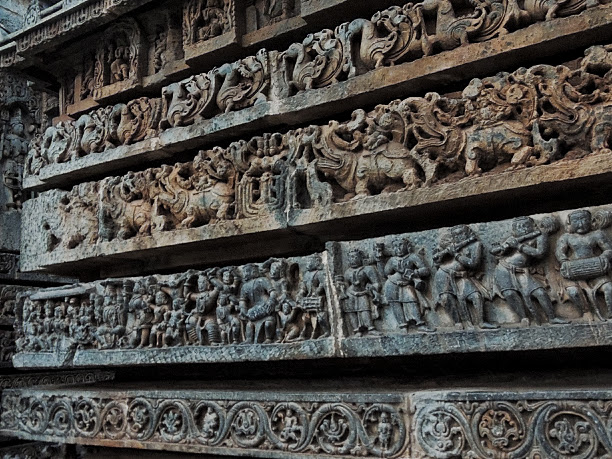 I stood on the star shaped platform and noticed the glorious structure in front of me.  Soap Stone had been used to carve the beautiful sculptures. Horizontal friezes ran across the exteriors of the temple. Lowermost were the elephants which signify power. Immediate above were the lions that symbolise courage, followed by a scroll of vines and flowers denoting beauty after which were the charging horses that represent speed. The scroll work repeated, followed by the mythological creatures like the makra and the swans. The upper portion of the exteriors had beautiful high reliefs of Hindu mythological stories depicting the childhood days of Lord Krishna, scenes from the epics Ramayana and Mahabharata. Each art form had its uniqueness and beauty. A story could be told for every figure and you could spend hours gazing at each creation. Such is the beauty of this marvellous making. One of the walls of the temple had a perforated look which you would find in all the Hoysala temples.

I walked inside and stood on a circular dais in front of the deity Shantaleshwar. The deity is named after the wife of King Vishnuvardhana who was called Shantala Devi. Shantala Devi was a patron of dance so there were many sculptures of ladies in various dance poses in the temple pillars. The dais is said to be set up for dance performances that were conducted by the queen. I walked ahead to reach the inner sanctum sanctorum of the Hoysaleshwar deity. It is told that there are around one hundred and eight pillars inside this temple. In front of each of the deities towards the East were Nandi the celestial vehicle of Lord Shiva. The huge statues of Nandi had been polished to such an extent that you could find your reflection on them. 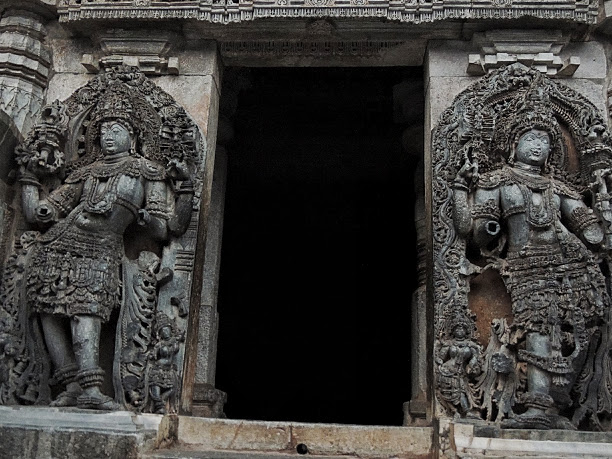 As I exited from the South I saw the doorkeepers standing at either side of the door, similar to the figurines at the entrance. The beauty of the door keepers was the ornaments they had adorned from head to toe. Every jewelry piece was carved with great finesse be it the finger rings, the necklaces or the anklets. Each was a masterpiece in itself. The sculptures in the temple are said to have three hundred different varieties of ornaments, no wonder it is called the Jewellery Box of India.

In the distant I could see the sun rising and the birds were heard chirping. Soon the sun’s rays basked the shrine and she glowed in all her glory. Time stood still and I was lost in its beauty.

One can stay in the numerous homestays in Hassan or Chikmagalur and visit this architectural work of art.

Best time to visit this place is from October to February when the weather is pleasant and the heat doesn’t take a toll.

8 Comments on “Halebid the jewellery box of India”