Posted on October 9, 2014 by Rathina Sankari 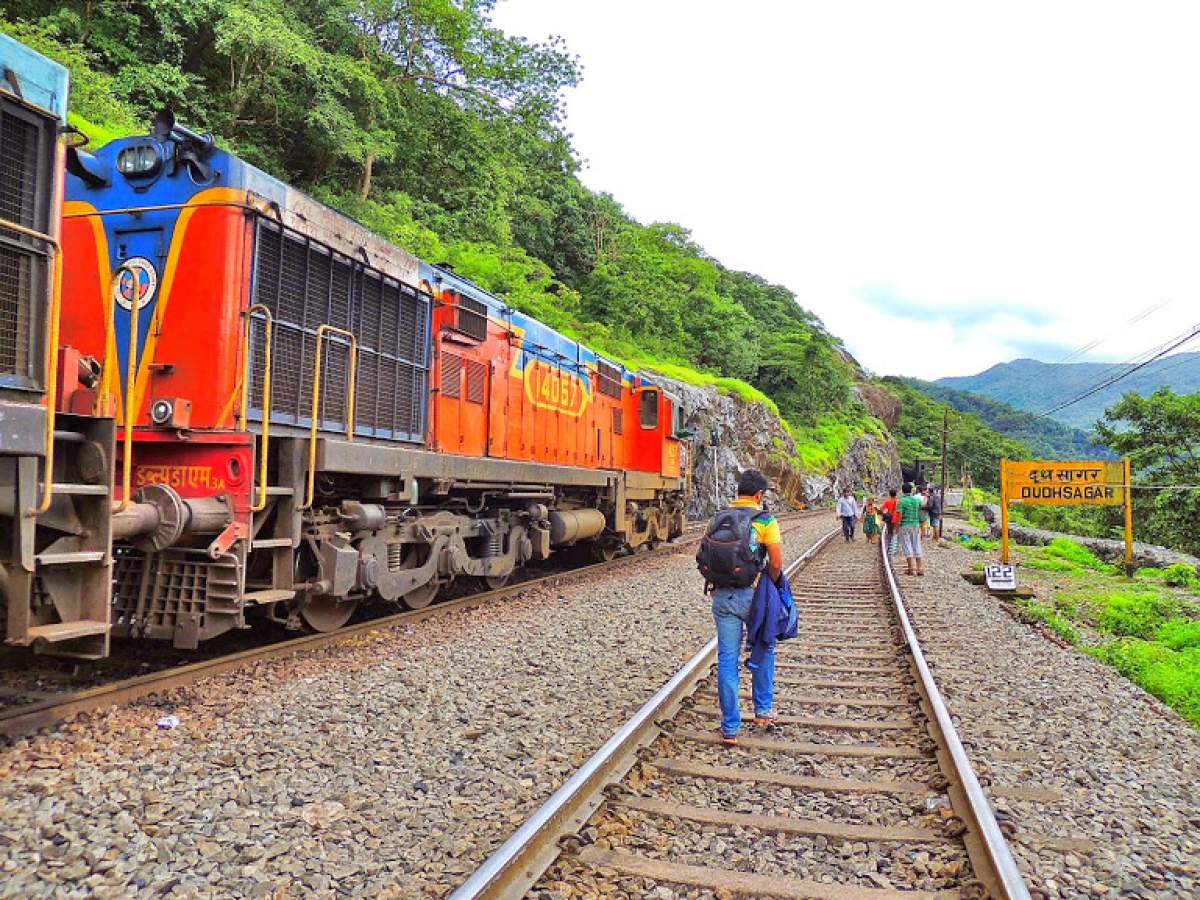 A modified version of this article was published in The Hindu.

I was deep in the forests of Dandeli enjoying the treks and hikes when I got to know, Dudhsagar is just few stations ahead of North Karnataka. I made an impromptu decision of hopping onto the train the next day and head on a day long trip to soak in the sea of milk.

Dudhsagar is revered one amongst the top five highest waterfalls in India. Having been to three of the five this cascade had been in my bucket list since long. I boarded the Amravati Express from the Londa Station with a picnic lunch in hand. Well the kind locals in the Dandeli resort told me that there aren’t any food outlets in Dudhsagar. So they volunteered to pack an amazing lunch of some Indian bread, Potato Sabji and Vegetable Rice early in the morning. Bless the kind souls! After an hour of traversing through North Karnataka lined by paddy fields and beautiful landscapes we reached the borders of Goa and Karnataka. The journey takes you through dark tunnels that open out into the broad daylight with the rains splashing down on the green earth. Life had sprung in every crevice and Mother Earth looked her resplendent self. You can watch the seasonal streams flowing intermittently through the Western Ghats as the train chugs into the wild hilly terrain. In around two hours you are dropped at the Dudhsagar station which doesn’t have any platform or ticket booking counter.

As we got down from the train we followed the crowd and walked along the railway tracks for a kilometer, crossing tunnels as the flood gates of heaven opened and it poured. But the rains did not deter the spirits of the travelers with the determination to explore nature’s wondrous creation. I soaked in the beauty of the surroundings and suddenly I could see it from a distant. She poured like a dream from the heights like a white misty veil into the depths of the mountains. True to her name she fell like cascades of milk being emptied down the cliff. Legend has it that a beautiful princess who would drink milk after her bath was watched by a king passing by. To hide her modesty she poured the milk to form a curtain and it flowed down the valley. It is told the sheet of water that plunges down the mountainside is the milk that continues to flow. Dudhsagar meaning a sea of milk tumbles down the cliff, meanders under the rail bridge and then snakes its way through the Bhagwan Mahaveer Sanctuary to flow in the state of Goa as the Mandovi River. 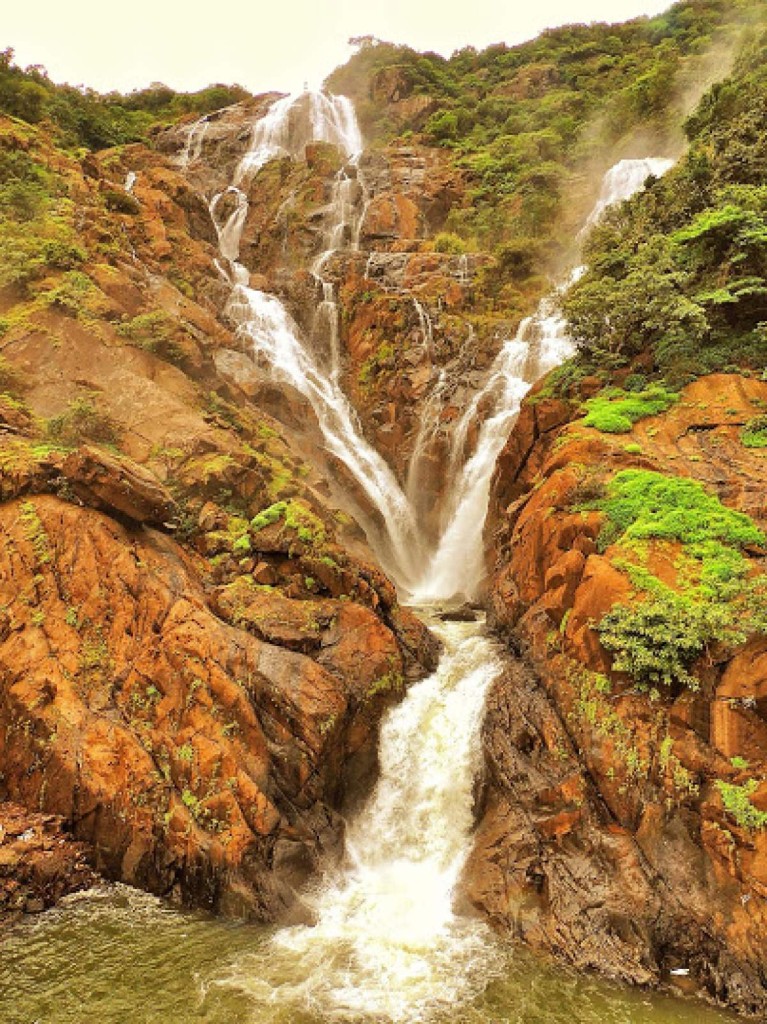 As I stood in front of her admiring her beauty and rapidity I was drenched in the mist of her sprays. Time stood still, despite being put there for long I couldn’t get enough of her. The mountains were covered with clouds and for some time I thought I was floating with them. I walked ahead, crossed some more tunnels and then noticed a small diversion to the right. It was a weather beaten path that had been walked down by the intrepid. In the rains it was slushy and there was the persistent fear of skidding down the non-existent path. Holding some roots and vines I trekked for thirty minutes through the forests and reached the base of the waterfalls that flows down as a stream. The cascade that was rumbling high up the mountain had mellowed to flow as a stream through rocks. I sat on a boulder and dipped my sore feet in the ice cold water. There was a strange freshness in the air that perked up my spirits and relaxed my aching muscles. A rope that was tied across the stream guided visitors to wade into the water and reach the other end. When the river is at her full, you would be chest deep under the water.

After what seemed like an eternity I hiked up the trail that left many breathless. I saw few tourists wore life jackets. On enquiring I got to know they had come from Goa (Colem) on motorbikes driven by pilots. Apparently Dhudhsagar Motorbike Association caters to driving tourists to the Dudhsagar Falls on bikes. Adventure would be understatement, as the drivers ride the bike beside the rail track on the gravel with the plunging valley on the other side. A delirious ride in the rains is something I planned to experience on my next visit to Dudhsagar.

As I walked back to the Dudhsagar station, I noticed the rubbish scattered around the railway tracks by the tourists. Used plastic bottles, chips packets and left overs lay strewed. It was dismaying to see nature’s beauty being spoilt by mankind. Dudhsagar is a treasure to be protected and maintained with a perfect balance of eco-tourism before it vanishes.

You can reach Dudhsagar from Karnataka or Goa. Board the Amravati Express from Londa or Castle Rock Station to Dudhsagar. Ensure you book your return tickets as well when you start from Londa considering there aren’t any ticket counters in Dudhsagar. The other option is to reach Colem in Goa and take a ride on motorbike for 500 INR both ways. You could also trek from Castle Rock which is around fourteen kilometer but the scenery is worth it.

There aren’t any accommodation facilities at Dudhsagar Falls. You can stay in the various resorts or homestays in the border of Karnataka and Goa. Castle Rock Lodge is close to the Castle Rock station.  Dudhsagar Spa Resort provides waterfalls sightseeing facility.

Barring a tea shop which also provides some light snacks you wouldn’t find any food outlet in Dudhsagar. You need to carry your lunch pack for the trip.

Best time to visit this place is in the monsoon (July to September) when the waterfall flows in abundance.

← Of Daarsaan and Dimsum
Durga Puja in Kolkata →
Tweet

5 Comments on “Dudhsagar cascade of milk”