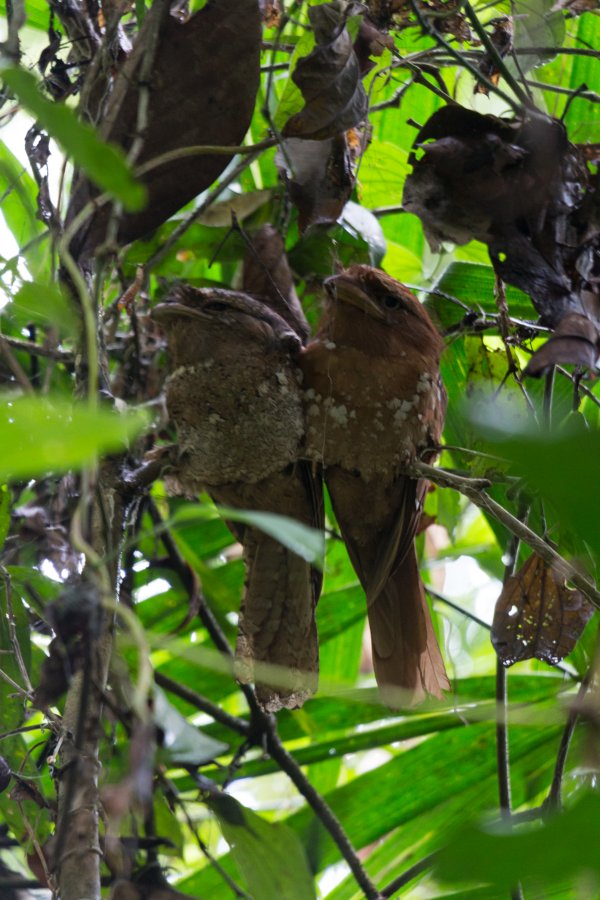 “Thattekad yetti”, murmured Sabu from the driver seat hinting that we have neared my destination in the local parlance. Groggily I scanned the dark surroundings from the confines of the car. We had left the traffic of Kochi late evening when the sky had opened up and I had unknowingly sunken into my languor. As I entered my room in the homestay I found a lone framed photograph of three unappealing birds captioned as the Ceylon Frogmouth perched on the table. Later over dinner I noticed pictures of this grey brown bird adorning the wall of every room in the guesthouse. 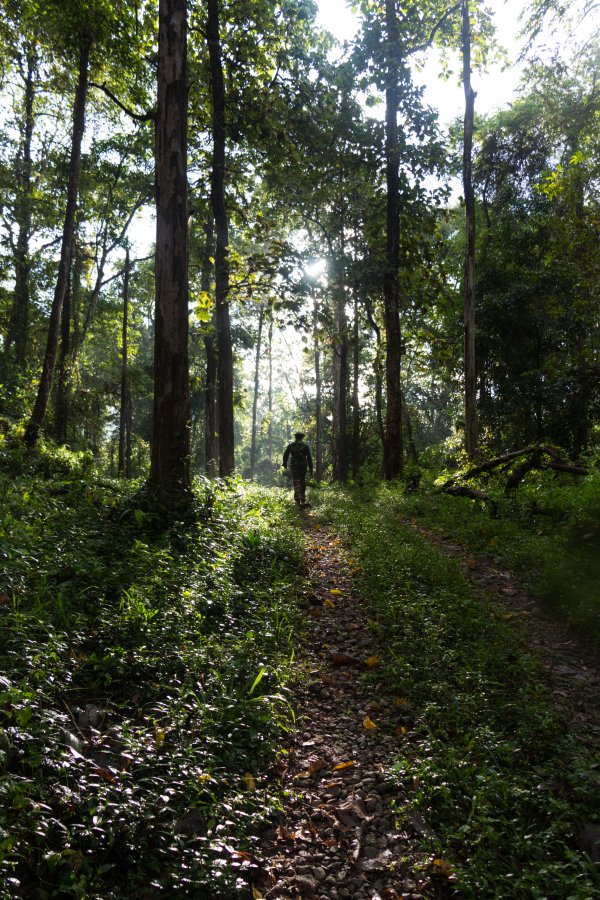 Following guide into the jungle

Next morning I headed towards the evergeen forest with my guide Girish and two birding fanatics from Bangalore. Long eeta reeds, teak, mahogany, bamboo and other towering trees stood as a canopy while we scouted the forest for the avians. I had committed the cardinal sin of not wearing a good pair of shoes while trekking in the forest and had instead arrived with a pair of bellies. As I trudged behind the obsessives, Girish took us to a rocky patch and asked us to keep an eye on few specific trees for the migratory Black Baza. We stood there for around thirty minutes and sighted various winged beauties like the Asian Brown Flycatcher, variety of woodpeckers; Orange headed Thrush, Oriental Honey Buzzard.  But the Baza was not to be found. Shortly Girish arrived after looking for the raptor in other trees.  Over talk Girish stated the Bangaloreans interest to sight the Baza, a rare dream bird for the avian aficionados.  I specified my wish to see the Ceylon Frogmouths that had caught my attention since the moment I had seen its pictures.  We moved ahead into the jungle hearing various bird calls and stopping occasionally to capture the Malabar Trogan in our camera. I kept checking my legs for leeches latched on to them. Invariably whenever Girish would show a bird I would be examining my feet for the crawling bloodsucker. He even joked, “You seem to be doing more of Leech watching than Bird watching”.   We went through undergrowth crossed hedges and suddenly the canopy of trees was no longer above us but the azure sky with a beautiful water body below, that had few trunks jutting out of it. A bed of grass fringed the pond and as the early morning sun rays peeped out of the sky, the dew drops glistened on the blades. There was a chill in the air as I quenched my thirst with the virgin beauty of the forests of Thattekad. 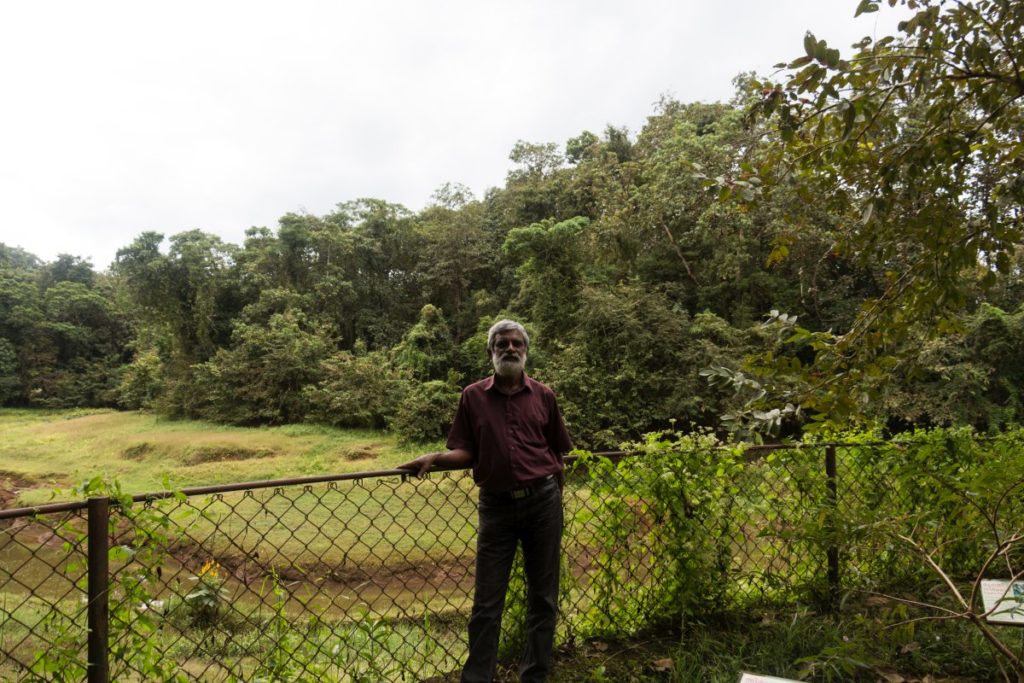 That afternoon I walked inside Thattekad Sanctuary office and met Dr. R.Sugadan a renowned ornithologist who has numerous credits under his belt. A major achievement being walking the entire 1600 km Western Ghats stretch thrice in search of the Ceylon Frogmouth, Broadbill Roller and the Red Faced Malkoha. I was all ears as he narrated the history of the sanctuary. In 1933 the Maharaja of Travancore had invited Dr. Salim Ali popularly known as the Bird Man to conduct a bird survey around Kochi and Travancore. The ornithologist started from Marayur took the Old Aluva Munnar road and reached Thattekad late night. Next morning as he walked out of the Dhak Bungalow he was greeted by numerous bird calls and ended up staying for fourteen days in Thattekad. Later he completed his survey covering 340 species across Kochi and Travancore of which in Thattekad alone he found 164. In 1983 Mr. Nooruddin the then forest minister of Kerala proposed to felicitate the Birdman of India for his stupendous contribution in the field of ornithology. Dr. Salim wanted the felicitation to be unique and creative in line with his interest hence expressed to have a namesake birding sanctuary.  Dr.Sugathan was entrusted the task of locating a place in Kerala with good bird life. After scanning the Western Ghats in Kerala Dr.Sugadan zeroed in on Thattekad which was declared as Kerala’s first bird sanctuary.

I expressed my interest to know the speciality of the Frogmouth and the focus it has received over the years to Dr.Sugadan. The energetic bird lover continued with his discourse. The frogmouth was listed as an endangered species with just two pairs sighted in 1983. With a single breeding period a year laying just one egg at a time it was difficult to revive their population.  In 1992 Dr.Sugadan took charge of Thattekad sanctuary and ensured habitat management by preventing forest fires, cutting of eeta and planting bamboo in and around the area where they were spotted. Today over two decades their number has increased to around fifty pairs.

Next morning I set out with Sudha, Girish’s mother towards the tribal village in Vellaramkutu. We had our breakfast in a thattukada, a roadside Kerala eatery. I gorged into some appams with egg curry for throwaway price. The tribal village was picture perfect as it stood amidst the dense forest and numerous streams. I kept reminding Sudha also a birding guide, to let me know if she happens to sight the Ceylon Frogmouth.

Soon we left the village and drove towards Pandapara when we met Girish with a team of bird watchers. He excitedly mentioned about sighting the Ceylon Frogmouth close to the place we stood. A motivated lot, we left the car and walked towards the forest. Sudha narrated her close encounter with elephants in the same zone few months back. We crossed a knee deep cold stream and then started to climb a rocky patch. Sudha left the main trail to look for the avian and shortly returned to signal me. I walked to the tree she was eagerly pointing and looked for the bird. She directed my sight to a particular branch and added there were two of them. After what seemed an eternity I finally found the nocturnal hidden amongst the branches and dead leaves in perfect camouflage with a deadpan look.  I wondered if they were meditating or in sleep when one of them blinked.

Sudha took me further ahead to a Vana Durga temple dedicated to the forest. Walking in the jungle that she calls her home she stated her love for the fresh intoxicating air. It is Durga who protects the jungle she declared. I walked behind in deep thoughts, is it Durga or godsent men like Dr.Sugadan who protect the jungle? Whosoever it is Thattekad is a haven that should be protected and left untouched.

An edited version of this article was published in The Hindu Businessline as In the birdman’s lair, which can be accessed here.

← Of Sacher and Sambar at Innsbruck
Wayanad the spice box →
Tweet