Love is in the Air

One fine day my dear hubby said he would be flying to Paris for a fortnight on business trip and if I am interested I could piggy back. Well it made me ponder as cost was a factor, considering my expenses had to be borne by us and I had to get leave from my office. On mulling over it I gave in to the idea and within sometime the visa and tickets were ready.
We boarded the Emirates and Dubai and reached Paris Charles de Gaulle airport only to discover that our baggage was missing. We had checked in 2 trolley bags and had 1 cabin baggage. Luckily I had an extra set of clothes in the cabin baggage but my husband wasn’t. We had landed on a Sunday and it was the summertime in France. My husband had to join office the next day and he didn’t have clothes to wear other than what he was wearing 🙂 When we contacted the airport authorities they asked us to fill in couple of forms and reasoned out that there were many tourists flying to Paris and hence they were operating to the full. We headed to our room and within couple of hours one of the bags reached our room but it was packed with grocery items and not clothes. Considering that we had decided to cook our Indian food in Paris we had carried lots of stuff. Looked like it wasn’t my husband’s day.
We had another couple with us Sudhakar’s colleague and his wife staying with us in the same apartment. We freshened up and unpacked the bags only to find that I had forgotten to pack one of the most important cooking item – SALT. Now I had learnt French in my junior college days for 2 years but I seemed to have forgotten it as raking my grey cells didn’t help. The guys hopped to the nearest store and tried explaining to the shopkeeper but the message wasn’t getting passed. Finally they found the item in the counter it was SEL.
We had our lunch and in the evening just walked through the roads of La Defense.

Next day Sudhakar left for office with his friend Tiju and I strolled the streets with Jino. I collected the maps and identified the places to visit. I had decided to cover most of the famous places in a fortnight. I started with the world famous art museum – Louvre. 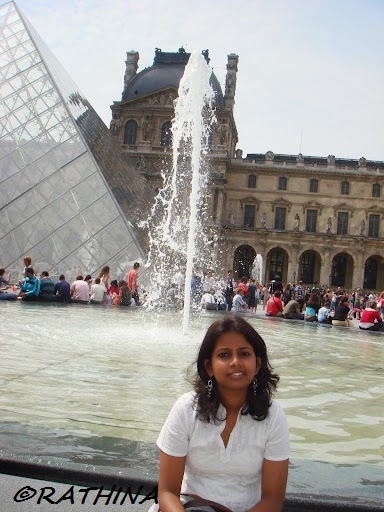 You need to walk for hours in this ancient fortress to get a glimpse of the art objects. There is so much that a day might not suffice. The Leonardo Vinci painting – “the best known, the most visited, the most written about, the most sung about, the most parodied work of art in the world.” Mona Lisa had the maximum visitors vying for a click with the masterpiece.
Paris has a number of museums, it’s the centre of art, a potpourri  – music, painting, sculpture you name it, it’s there be it Venus de Milo statue or Picasso’s artwork. My husband missed it as he was busy with his client; in fact he missed most of Paris’s attraction.
The next day I travelled to the airport to collect the baggage that was still to be delivered and relieved my husband from the tension. He had borrowed his friend’s shirt for the day and couldn’t sustain it further.
On the third day I left for Concorde a major public square, Petits Palais, Grand Palais – museums

Myself, Jino, Tiju, Alex ,Sudhakar, Jordan and Priyesh left for Champs Elysees. We were later joined by Claire and Berthil 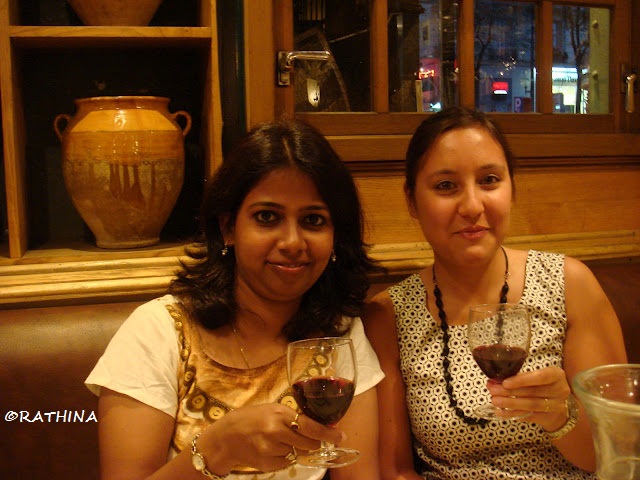 That’s my first ever drink of wine – Bordeaux Wine and beside me is Claire, Alex’s fiancee. On looking at the menu card I didn’t know what to order as in those days I was a pure vegetarian and it had just 1 dish which was veg. Everywhere that I would go in France I would keep stating in the eat outs no meat, no fish, no egg.

I couldn’t ingest much of it as it lacked the spices that we Indians are so much used to and had some bread, olives.
Paris isn’t complete, I would be back watch this space for more.

4 Comments on “Love is in the Air”