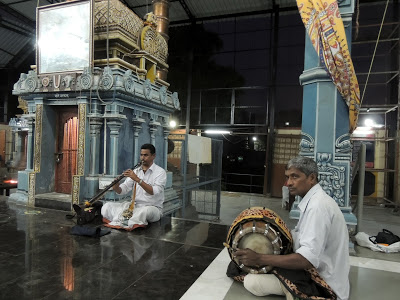 Yesterday I had again been to the Balaji Temple in Pashan, Pune. It was a special occasion and there were musicians from Tamilnadu to play the Nadaswaram the acoustic musical instrument of south India. It is made of a wood and is a cousin of the shehnai but larger.

The percussion accompaniment to the nadaswaram is the thavil a barrel like drum. On one hand the player wears caps in his finger while in the other he holds a stick. It is either played sitting or with the thavil hanging round the neck standing.

This duo is always found in every Tamil Hindu marriage. I would say a marriage would be incomplete without it. When the groom ties the thali around the bride’s neck the nadaswaram and thavil is played in the background.
They are an integral part of every temple ceremony. I simply love it and do not miss a chance to be a part of the event, though its very rare here in Maharashtra.
You can get to hear this jugalbandi here.