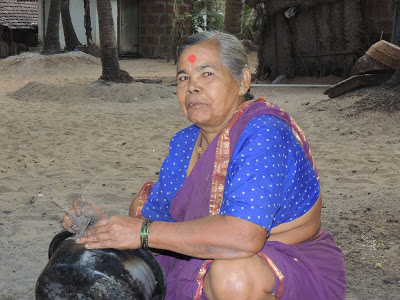 I sat beside her as she washed the vessels with ash. She was a septuagenarian draped in a kasta. Kasta is a sari draped in the Maharashtrian style by tucking it at the back around the waist. I couldn’t stop thinking if I would be so fit at her age. Though she spoke the local dialect Malvani, I could decipher it due to its Marathi influence.

EXPLORE – WANDER Devbagh is very close to Goa but free of commercial influences and crowd. Majority of the population is the fishermen community who lead a life with the motto Less is More.  Either they would be mending their nets or rowing across the Arabian Sea for their catch. Fish is found in plenty here and the locals consume it five of the seven days of the week. Mondays and Tuesdays are the vegetarian days.  Devbagh is known for its white, clean sand and clear as crystal water. As you sink your feet into it and watch the sunset you relax into a cocoon of tranquility. The natives give you all the space to enjoy its beauty and do not hanker around the tourists. You wouldn’t find any shops or rides on this pristine beach.Devbagh is a peninsula surrounded by water bodies on three sides.  Towards the East is River Karli, west the Arabian Sea and the third is the confluence of the sea and the river called Devbagh Sangam. You could reach Karli jetty at dawn to witness the sunrise. Take a motorboat ride to the Sangam and watch Dolphins frolicking around you.  Further ahead is the Nivti Beach with colorful rock formations. Variety of Birdlife could be found en-route to the Tsunami Island.  I had reached Devbagh, a hamlet in Western Maharashtra the day before and was enjoying every bit of it. This sleepy town didn’t have the frenzy of the cities but had the charm of a laid back life in simplicity. As I drove down from Pune through Kolhapur to this coastal settlement I was welcomed with the aroma of the Mango flowers. They were in full bloom and promised a year of abundance. I inhaled the air on the red soil with tiny houses surrounded by coconut, mangroves, cashew nut and jackfruit trees. The day’s weariness due to travel was all gone. 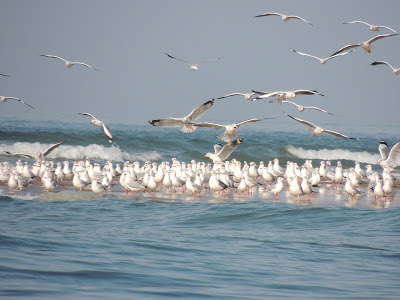 As the name suggests this island was formed when Tsunami struck the Indian Ocean. Today it offers a plethora of water sports like Jet Ski, Banana ride, Bouncing Ride etc. with package deals of INR 800 per person.
SOAK – Devbagh is part of Sindhudurg district in Konkan.  Malvan is the closest city and is a thirty minute ride by road. You could take a motor boat to the Sindhudurg fort from Malvan jetty. This fort is located amidst the sea on an islet and was built circa 300 years ago. It is still well maintained and carries historic significance since the Maratha period. You could explore it and then gear up for adventure filled activities. Snorkeling and scuba diving services are offered in this island to discover the colorful coral reefs and marine life of Arabian Sea. Scuba Diving is charged at INR 1500 per person, while snorkeling comes at INR 300.
REVIVE – Drive down to the Rock Gardens in Malvan for a panoramic sunset. Sit on the rocks and experience serenity and peace as the sun sinks and the avifauna return home. Pay a visit to the Jay Ganesh temple and check the temple’s architecture, designed such that the sun rays fall directly on the idol on Makar Sankranti.  The Kunkeshwar beach close to the ancient temple of Lord Shiva is a beautiful and clean coastline close to Malvan. This place is also famous for the Devgad Alphonso Mangoes that are exported worldwide. Visit Sawantwadi to explore its art and culture. This place is famous for its wooden toys and lacquer ware.
STAY – Maharashtra Tourism and Development Corporation offers a lavish stay in the house boats anchored at the backwaters.  One could relax in the pleasant surroundings with nature. (http://www.maharashtratourism.gov.in/MTDC/index/index.aspx; doubles from INR 6500 for a couple per day inclusive of food) Devbagh also gives you the choice of homestays. A stay with the locals offers a glimpse into their life and one also gets to savor the home cooked meals. Omkar Deluxe Beach Resort has six spacious rooms with attached bathroom and hot water facility. It is managed by Ninad Tandel and this homestay is surrounded by coconut trees. (09403291549; http://www.omkardeluxebeachresort.com; doubles from INR 1200)
EAT – Devbagh is a food paradise especially for the sea food aficionados. You can find various delicacies made from mussels, prawns, crab, lobsters and other variety of fish.  Freshly caught from the sea they are assured to tickle your taste buds. You can also indulge in the local cuisine which has a heavy influence of coconut and Kokum. Sol Kadhi is a cooling drink that aids digestion and is prepared from Kokum and coconut milk. Kokum juice is another refreshing drink popular in Konkan.  Do not miss the Malvani specialty Kombdi Vade, a country chicken curry had with deep fried Indian bread. Ukdiche Modak is a steamed item prepared of rice flour and stuffed with coconut and jaggery filling. This is available in most Konkani homes. Also Ghavan is a crepe made of assorted lentils and had with coconut chutney for breakfast.  You can experience this culinary trail at any of the homestays or the Malvani restaurants in Malvan.  Do not forget to carry home the Alphonso mangoes and cashews if you visit this place during the summers.

Orientation – Devbagh is around 600 km from Mumbai by road and is in the southernmost tip of Maharashtra.

Air – Goa, Dabolim Airport is the closest and daily flights connect with Mumbai. Goa is close to 120 km from Devbagh

Rail – The best way to travel to Devbagh is by traversing through the Western Ghats in the scenic Konkan Railway. There are around 5 trains that ply between Mumbai and Kudal which is the closest station to Devbagh. It takes around 10 hours to reach Kudal. Thereafter it is 45 km of travel by rickshaw or bus to Devbagh.

Road – Maharashtra Tourism and Development Corporation have regular buses from Mumbai and Pune to Devbagh.  Private buses also operate in the same route overnight. Drive from Mumbai is either on NH17 or NH4.

Getting around – It is best to have a car or a cab at one’s disposal when travelling between Devbagh and places around Malvan.
Seasons – Devbagh is very hot and humid during the summers. Temperatures soar up to 33 °C from March to May. June to October sees abundant rainfall with marshy land all around. Winters are very pleasant and also the best time to visit. One can explore and indulge in various outdoor activities. Temperature dips down to 16°C from November till February.
Need to know – Market and medical facilities are available in Malvan which is around 6 km from Devbagh. ATM of various banks and petrol pump are only available in Malvan.