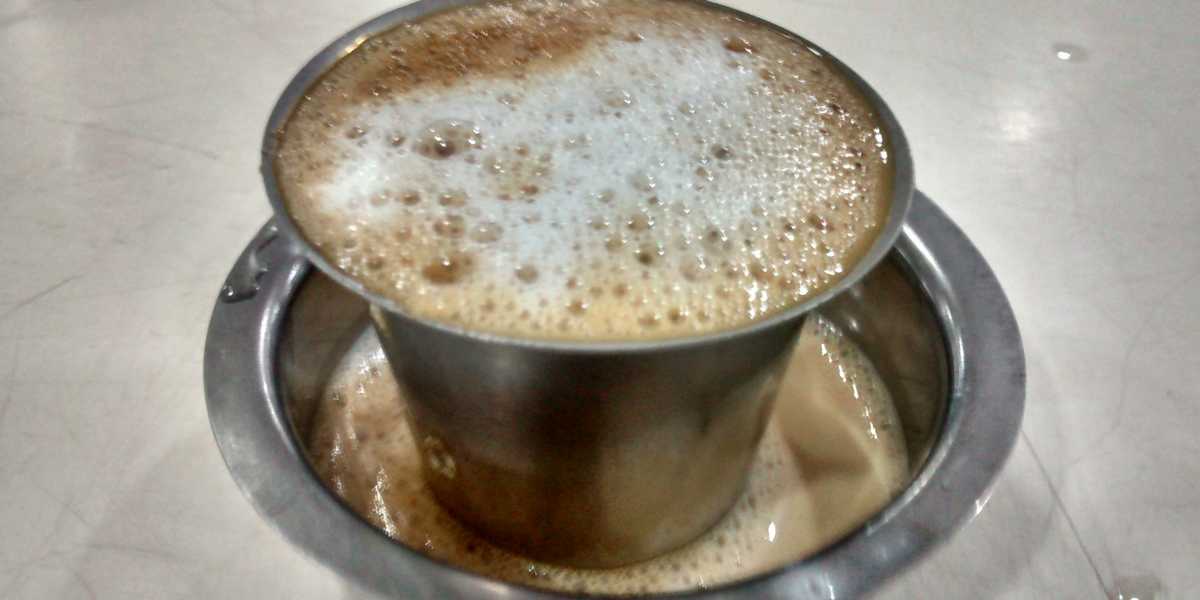 It had been an early day for me. I had woken up at 3 a.m. in the morning to board my flight to Chennai from Pune. Hazy eyed I boarded the flight at 5:30 a.m. I was on my way to Madurai, the temple city of Tamilnadu and had to spend couple of hours in Chennai. As soon as I had settled on my seat I was off to sleep. The week long ill health had taken a toll on me. When I woke up I realised we were mid way to Chennai and in half an hours time we were to land in the erstwhile city of Madras. White puffs floated like a endless bed of cotton as the azure sky met at the horizon. 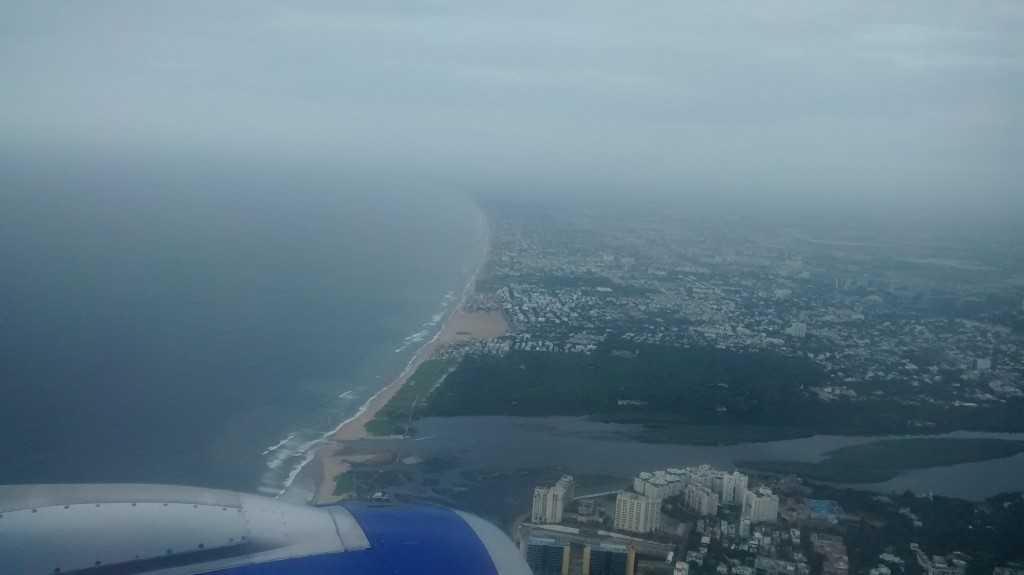 As we prepared for the descent I could see the coastline of the Bay of Bengal clearly de marking the land from the sea. The flat colourful houses laid out as a carpet with a stream snaking its way through the city. The flight attendant announced of the arrival at Chennai’s Kamaraja Airport and also suggested to try out the well known dining places Saravana Bhavan, Ananda Bhavan and the Sri Krishna Sweets during our stay in Chennai. 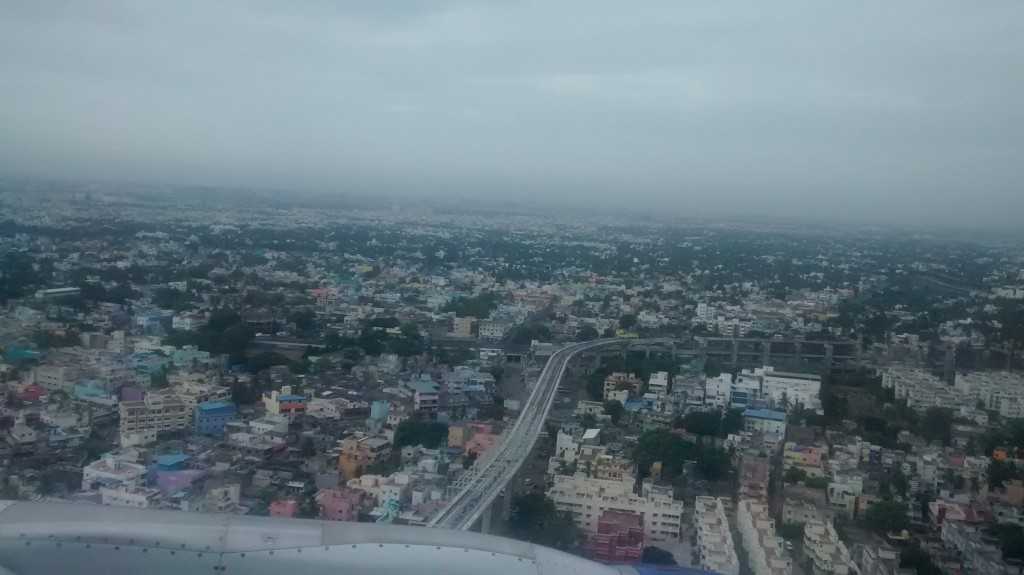 I de-planed and walked into the Chennai airport I saw the neon lights of Sri Krishna sweets stall glittering. The mysore pak of this sweet house is a gastronomic delight as it melts and drifts smoothly into your breadbasket. I didn’t want to add further calories to my already exceeding waistline and hence didn’t give it a second look. 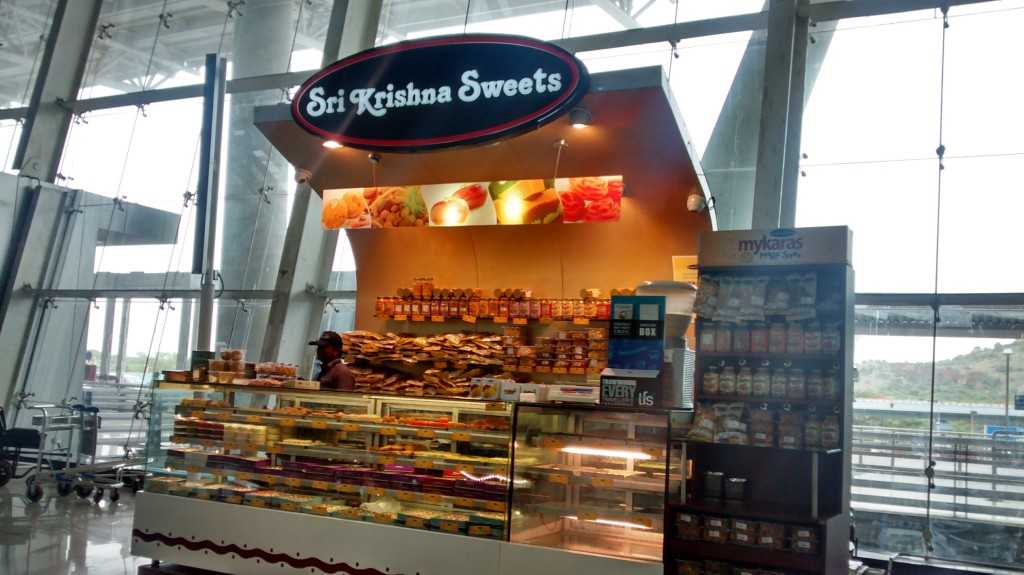 I walked out and took an auto rickshaw it was just 7:30 a.m. and Chennai’s day had already started. The shops had opened up, the florists with the malli poo (jasmine flowers) and other varieties  neatly arranged after having threaded them were busy with their day’s business. 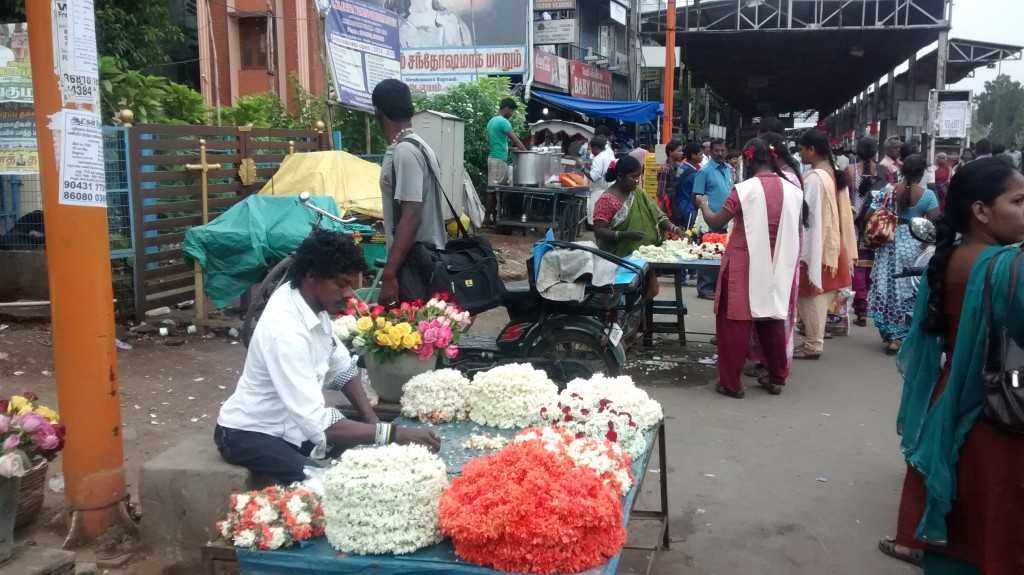 The aiyer ( read purohit/priest) wearing his Pancha Kachcham  (dhoti) was driving his TVS to attend to his puja. Kids dressed in their school uniform clambered on the buses. Chennai had woken up quite early and was brimming with it’s daily activities. The gulmohar trees here were still in full bloom. Monsoon hadn’t reached Chennai unlike the North West region of India. 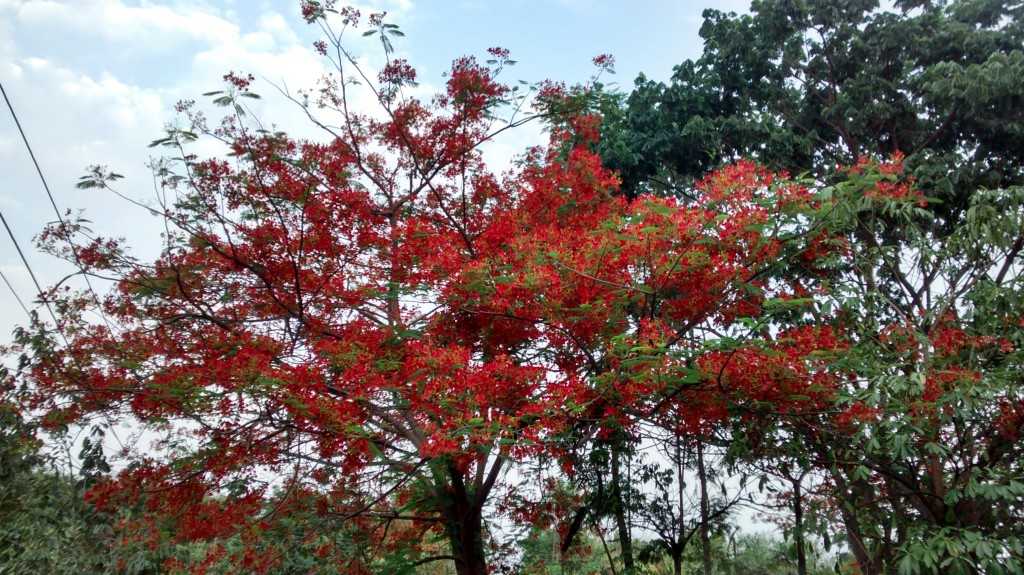 It was the Aadi (Tamil Month)  Amavasya day and I could see the fervour in the temples across the street. Groups of people walked on the streets dressed in yellow dhoties and spears pierced through their tongue. People danced in frenzy to the drum beats. It was time for my breakfast and I remmbered the flight attendant’s advice. In the past I have had the chance to have meals at Saravana Bhavan in Chennai and also its branches at Singapore and London though I have found them tad costly and also the portion served is less. I have dug into the savouries and sweets of Aananda Bhavan and have always enjoyed them.

This time around I decided to visit Vasanta Bhavan a chain restaurant specializing in South Indian Vegetarian delicacies across Chennai. I headed to their Tambaram branch which didn’t have anything to rave about in terms of decor and ambience. 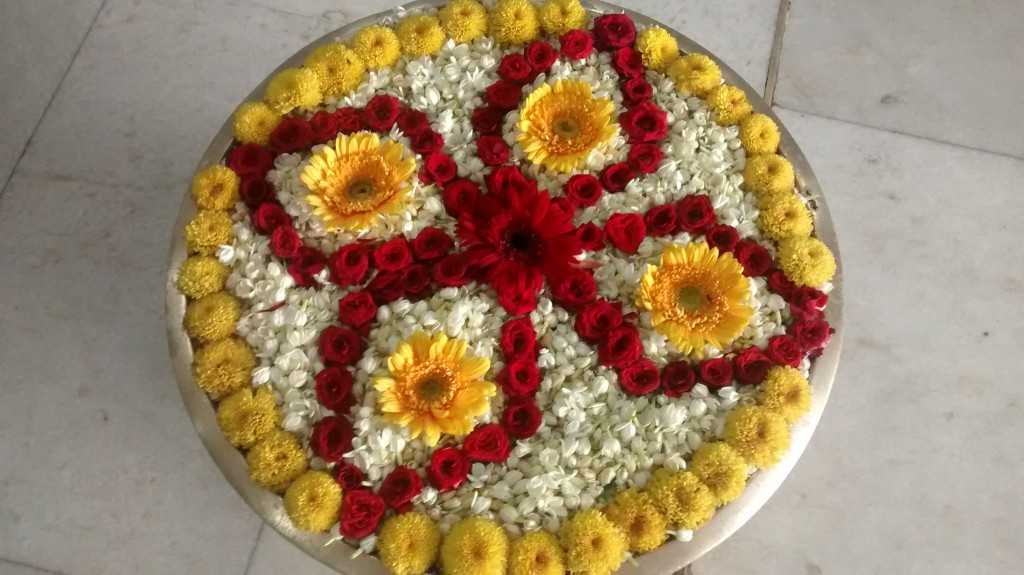 A beautiful floral rangoli in an urli (urn) welcomed the guests. White table tops with plastic chairs gave the whole set up a simple look. The menu for the day was idli, dosa varieties, vada, pongal, puri masala etc. I ordered sada dosa with medu vada sambar and one filter coffee. 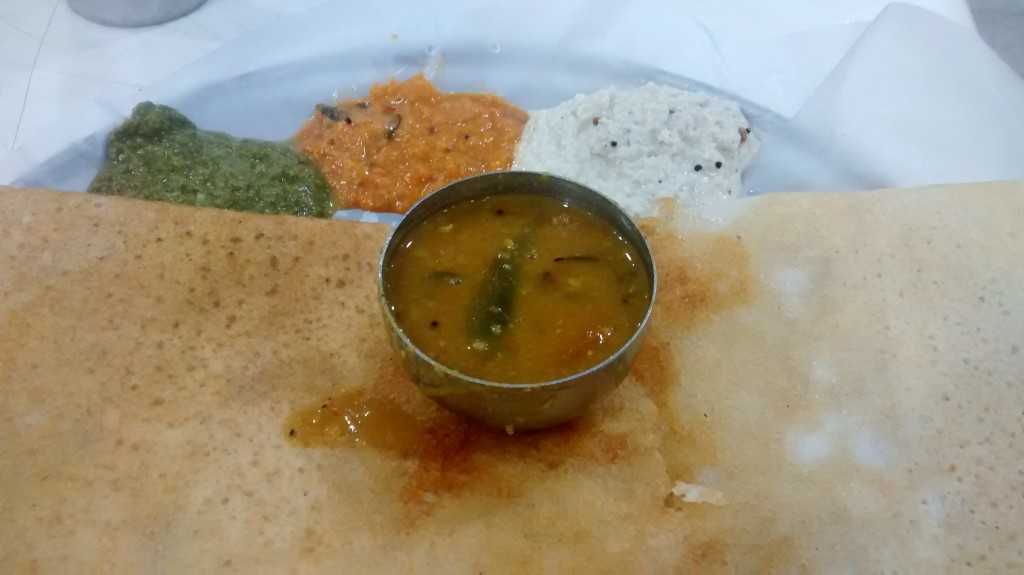 Within five minutes I had a hot dosa with a variety of accompaniments, tomato chutney, coconut and green coriander leaves chutney and sambar. The dosa was served in a steel plate without the spoons and forks. I would have preferred the banana leaf version which takes you to a completely different level whilst savouring the meal. As I gorged into it and had the last piece of vada a steaming hot tumbler of filter coffee was placed before me. 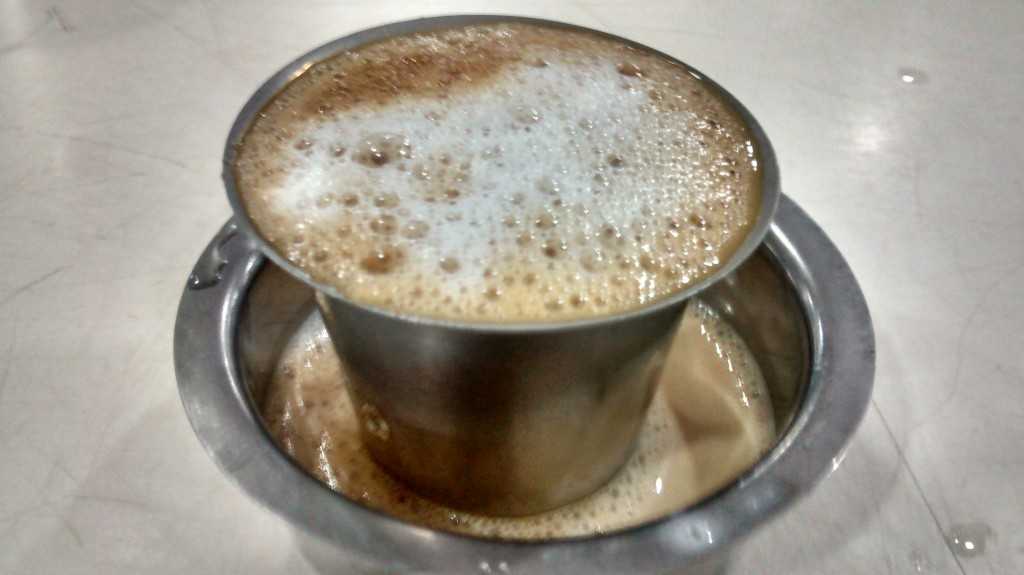 After having washed the breakfast with the hot foaming drink I waited for the bill. It was one hundred and five rupees not bad from Chennai standards. I left the hotel with a smiling waiter waving back to me. the tip had done its wonders. 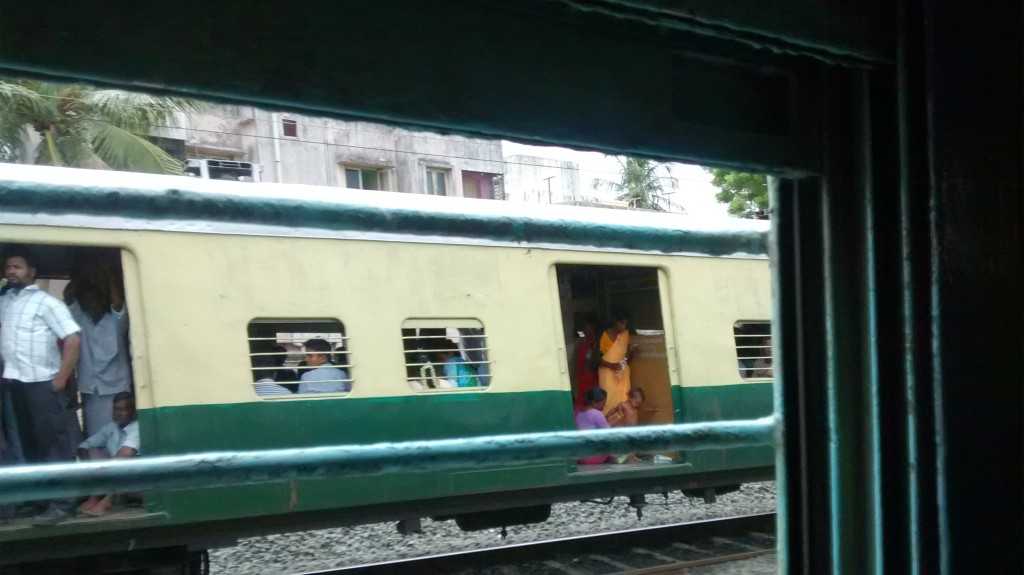 From there on it was time to board the electric train the pulse of Chennai.  A five rupee ticket would transport me from Thambaram to Tirusulum station. As I boarded the train I saw working ladies seated and having their morning breakfast of idli and dosa in their tiffin boxes. During rush hours it is difficult to board these trains but one should experience it at least once whenever in Chennai.

Chennai left me wanting for more, would I come back, I sure would after all it’s the place where I get to revisit my South Indian roots.

All photos have been taken by my cellphone.