In the Lap of Nature-Virgin Valparai 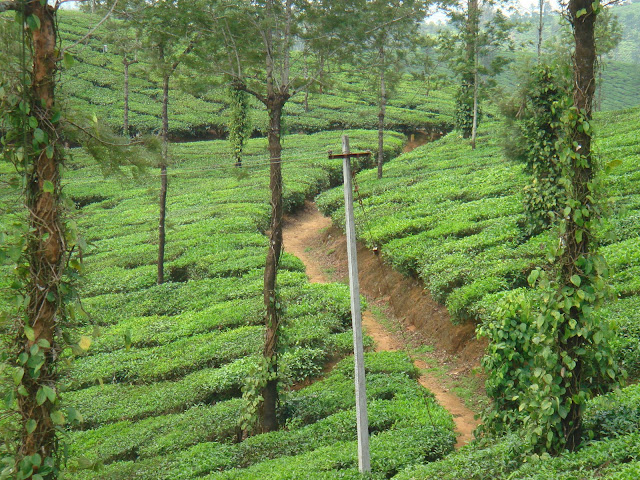 Green the color I love the most. One of the colors of Mother Earth also signifies fertility and gives a calming effect. Far from the bustling, burgeoning city life I decided to spend some time in the company of my favourite companion – Nature as always 🙂

I left for Madurai – city in Tamilnadu famous for its Meenakshi Temple and also the fragrant Malligai Poo (Jasmine), had to attend two ceremonies there. After having done with it headed further South to Pollachi a small town close to the city Coimbatore. The next day early morning we started for Valparai the rather unknown Green Valley on Earth.

This small town is about 64 km from Pollachi and there are regular State Government buses plying every half an hour till 10:30 p.m. Valparai – the unscathed, untouched hill station. Valparai isn’t visited by tourists as much as other hill stations hence its still safe from the litter produced by the tourists. Its an untamed paradise on earth. 5 of us left for Valparai early morning 6:30 a.m. in a Maruti 800 and hit the Pollachi Valparai road, close to an hour later we reached Aliyar dam. One could spend sometime at Aliyar dam else move ahead to reach in a short span the waterfalls – Monkey Falls. As the name suggests this place is an abode for monkeys and just be careful lest they snatch eatables from your hands.

From Monkey Falls you have 40 km to reach the final destination of Tranquility, but before that you have close to 40 hair pin bends to traverse through. The drive is scenic and you will love every bit of it unless you suffer from motion sickness. I very much wanted to capture each and every panorama being a shutterbug myself, but of course it would be difficult for the driver to stop in as and when we want, coz the roads are steep and not so broad for 2 way traffic to flow. (though it seems the roads were pretty bad and comparatively narrow in the past). Every direction that I turned I could see greenery. In my daily life I get to see concrete jungles and my desktop this was way different had such a calming,cooling and soothing experience, I wished we could stay in this milieu for ever.

En route we stopped at Waterfalls Estate and helped ourselves to homemade breakfast that we carried- Ragi Sevai, Unni Appam on plantain leaf and enjoyed the surroundings. As you drive through you will find Tea Estates throughout the journey and at times thick dense forest surrounding you.You would also get to hear the chattering of the monkeys and if you are lucky enough you could spot them too. There are boards put up en route saying that you could find deers, monkeys etc in the area you are passing by. Few spots had waterfalls and tourists were seen bathing in the same. The road goes all lithe and lissome through the Anamalai mountain range to reach the small town Valparai. On the way we stopped at Siddhivinayak temple to offer our prayers to the Lord. Unlike the mythological stories told in South India that Lord Ganesh isn’t married the temple here has statues of Lord Ganesh with his two wives. Its told in northern India that the elephant deity is married. Flowers were in full bloom and at times you can smell the fragrance of various flowers on your way. We finally reached the town of Valparai with few schools and a small market.

From here we headed towards Mudis which comes under the Mist zone area. On the way we got to see Coffee plantations and some newly planted Tea Plantations. There were pepper creepers too grappling over trees and of course cardamom. One of the major problems here is that the roads next to the estates are owned by the estate owners, hence its their responsibility to lay the roads not the governments. We found the drive from Valparai to Mudis bumpy. We reached Pannimade (meaning area of pigs in Tamil) which actually was Panimade (meaning misty area) but colloquially got changed to Pannimade in the long run. Well this was our destination, which had the Tata Coffee factory – Pannimade Estate. 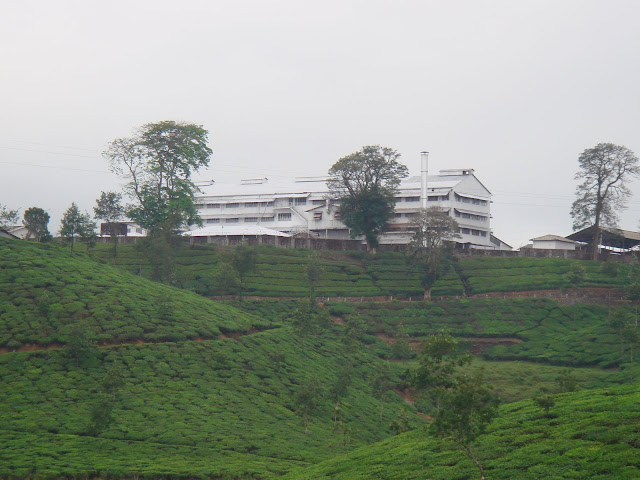 We knew one of the locals working in this company so we were allowed to go on a Factory visit to check the Tea Production. The Tea leaves are dried for close to 15 days and then powdered -which have different grades and are distributed to various outlets all over the country. The finer the granules the higher the rate and this factory had around 5 different grades. The tea plantations here were pretty old planted by the Britishers somewhere in 1920. The Britishers were the first to cultivate tea here. Valparai is surrounded by thick dense forests and locals here have had some mishaps with the wild animals viz. elephants, bisons etc. Its not new to hear stories that elephants were on the rampant and they reached the residential area, uprooted the trees, broke down the doors etc. Locals here could take you in their trucks in the night time if you are interested to view some of the wild animals :). Leeches are found in abundance during the rainy season here.

We stayed in one of the locals house for the day. Valparai isn’t commercialized unlike the other hill stations viz. Munnar etc, hence it doesn’t have facilities for stay etc. In the evening we headed for Balaji Temple. This temple is surrounded by beautiful flowers and children’s park. The flowers and plants that grow in Valparai are so beautiful but they can’t be grown in a place like Pune as they need the environmental conditions prevalent in Valparai. We planned to go to Adirapalli falls the next day…yeah the very same falls – where Kamalhassan took a plunge to commit suicide in the hit Tamil movie

Punnagai Manan. Unfortunately our plan didn’t work out and the next day we headed back to Pollachi with few kg of Valparai tea. Next chance that I get I am surely heading towards Adirapalli falls. Wait for my post on the same 🙂

Nearest railroad :- Pollachi
Nearest airport :- Coimbatore 40 km from Pollachi.
Lodging :- Not many hotels/lodges are available in Valparai. Its better to stay at a locals place.
Best option for traveling from Pollachi to Valparai is a taxi as you can stop at any place and enjoy nature’s pristine beauty.

15 Comments on “In the Lap of Nature-Virgin Valparai”