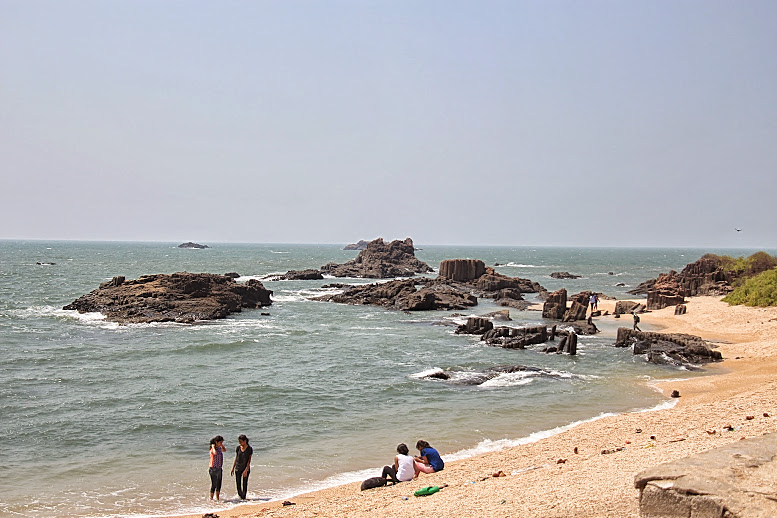 As I scanned around I could see the Gurpur River meandering through coconut groves while steamers and boats bounced over it. I was atop Sultan Battery an edifice built by Tipu Sultan to contain the entrance of warships through Gurpur River. Though it is a simple watch tower it looks like a miniature fortress with musket holes for mounting canons. I had reached Mangalore the day before and was enjoying every bit of its cultural extravaganza.

This region of Karnataka is said to have been created by Parshurama after reclaiming land from sea. Trade brought Greek and Romans to Mangalore. Greek geographers Pliny and Ptolemy referred to Mangalore in the early historic times. The city is the headquarters of Dakshin Kannada district which once belonged to the Madras Presidency. Mangaluru or Mangalore was earlier called Mangalapuram after the presiding deity of the city Mangaladevi. A centre for learning with the presence of numerous colleges and renowned universities like the Manipal it is distinguished as an education hub. Financial institutions like the Vijaya Bank, Syndicate Bank, Corporation Bank, Karnataka Bank and Canara Bank were founded in and around Mangalore. Dakshin Kannada nestled in the Western Ghats and bordered by pristine beaches is a melting pot of various cultures and traditions. The Portuguese rule in the 16th and 17th century followed by the British had a major influence in the lifestyle of the inhabitants in South Kanara. Presence of  numerous communities like the Konkanis, Bunts, Tulus, Jains, Christians and Muslims has led to a confluence of social behavior and mores.

My day had started early with a heavy breakfast at Sri Ram Bhavan also called Ayodhaya. This place located at Kodialbail doesn’t have any ambiance per say but serves the best authentic local breakfast. Idli made in jackfruit leaves called Kottigai or Mudey which is had with coconut chutney, lentil and Jackfruit Patoli a sweet made of jackfruit pulp, jaggery and coconut shouldn’t be missed. Have you ever tasted cucumber Idli made with semolina, cucumber, jaggery and a dash of dry fruits? Pathrode a dish made of colocasia or arbi leaves is a speciality during the monsoon. I washed them down with filter coffee served in a tumbler and dabra. These tiffin items (breakfast called in South) are said to have their origin in the Konkani community and are indeed a delicious lot. The eatery serves these specialties for a steal. 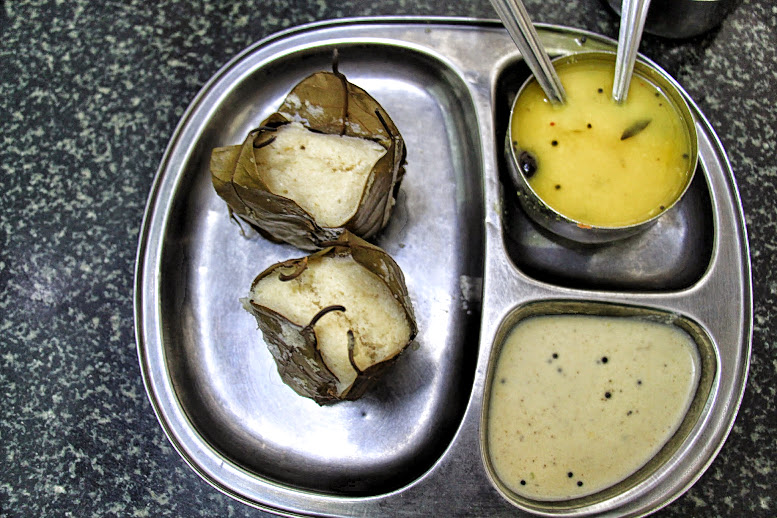 Having had my fill I drove past the well-known St. Aloysius Chapel located within the Aloysius College premises. Built in 1880 the speciality of this church are the colourful frescos painted by Italian Jesuit Antonio Moscheni. Mangalorean architecture indeed has its own style and trademark. Its signature is the usage of Mangalore Tiles for roofing. Made of clay which is found only in Mangalore these red tiles dominate the skyline of cities and villages in South Kanara. They are said to be long lasting, cheap, durable and do not leak when compared to concrete roofing. Clay is mixed through rollers, grinders and pug mill. It is then separated, oiled poured into moulds, cleaned and trimmed. It is dried for few days and then baked in the furnace. Post quality check and grading they are good to be sold. I had the opportunity of understanding the process of making these tiles by visiting the Albuquerque Tile Factory which is one amongst the five surviving today. At one time there were hundred such factories but today with labor issues most have shut down.

Talk of Mangalore and one wouldn’t miss speaking about its predominant spicy sea food. As I walked into its fishing port I saw ladies buying and selling fishes of all sizes while fishermen unloaded their catch from trawlers. To tell it was crowded would be understatement as there was no space to set a foot. They haggled and settled over the cost after a short dialog. Trucks carried the fishes to be sold in the city and elsewhere while birds encircled above to eat the leftovers. Fish is a major part of a Mangalorean’s diet and most have it on a daily basis. For lunch I walked into a non-descript outlet specializing in sea food. Anjal Tawa Fry, Etti Sukka or Prawns Fry are few to name. Bangude Puli Munchi a fish curry made with mackerel, sardines or shark is well known in and around this district. With major influences of Portuguese and Konkani cuisine this curry is similar to Ambot Tik prepared by Goans. Use of Byadagi chilli and Kokum as a souring agent is very common. Another noteworthy dish is the Bangude Ghassi which is a Bunt style Mackerel curry had with rice. Murmora fish fillet baked in plantain leaf is a specialty of the Christians in this part. Mangalore has a plethora of options for those who are the seafood aficionados. After tucking in loads I yearned for something cold to beat the heat. I strolled into Pabbas a food chain selling cold drinks, ice cream and snacks. It is their iconic Gadbad ice cream that I craved for. A concoction of kesar, vanilla and strawberry ice creams with a sprinkle of jelly, dry fruits this vertical sundae is a sin that will explode your senses and give a heavenly feeling. I drowned into a flavorful piquant that took me to the sublime level. 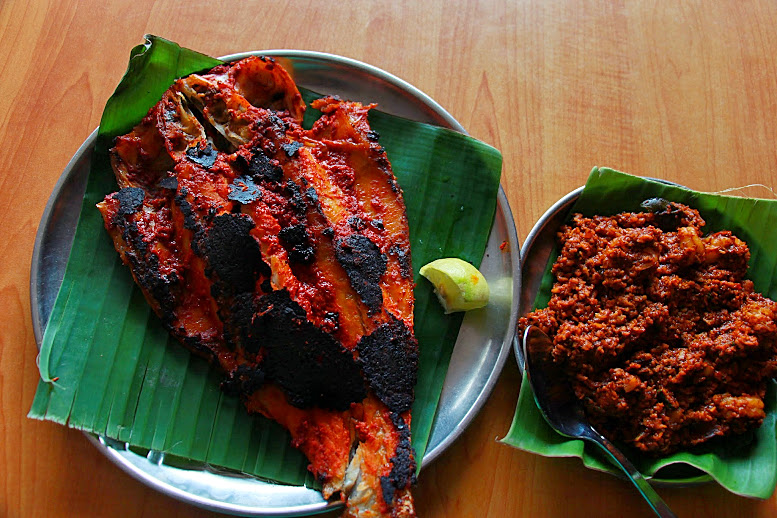 My first day in Mangalore had been fulfilling and satiating. I desired to breathe its sea air and enjoy some solitude. I walked bare foot on the soft sand. The entire coastal belt across Dakshin Kannada is a treat for the sore eyes that have lived a life in the burgeoning cities. Kaup beach with its Light Tower, St. Mary’s Island peppered with basaltic lava rocks, Panambur Beach and Ullal Beach are few of the numerous sea sides with great sunset views. I sat on the shore and cooled my heels. A strong gust of wind blew around as the last ray of sun disappeared into the impending blackness. I could see the glow of lights in a beach front restaurant. I walked in to savour the ubiquitous Manglorean speciality Chicken Ghee Roast and Kori Rotti, a crispy rice pancake had with chicken curry cooked in coconut base. My culinary journey in Mangalore hadn’t come to an end; this was just the beginning. I had lots to relish and devour as an epicurean. Did I just smack my lips?

Trains and overnight buses operate from Pune to Mangalore on a daily basis. www.rrtravels.co.in (rrtravels@hotmail.com/ +91 9845331926 / 09035358888) provides good taxi services for visiting places in and around Mangalore. Dakshin Kannada is best experienced from October to March when it is pleasant.

For a luxurious stay you can halt at The Gateway Hotel (www.thegatewayhotels.com) or The Ocean Pearl (www.theoceanpearl.in). If you want a beach front resort experience Summer Sands (www.summersands.in) in Ullal is a great option.

Mangalore is closer to places like Coorg, Murudeshwar, Darmasthala, Gokarna, Karwar, Hassan, Udupi, Chikmagalur as compared to Bangalore hence the best option for transit and stay. Easily accessible by road, rail and air it has lots to offer to the tourists and is a must visit when in Karnataka.

10 Comments on “The Mangalore Palate”