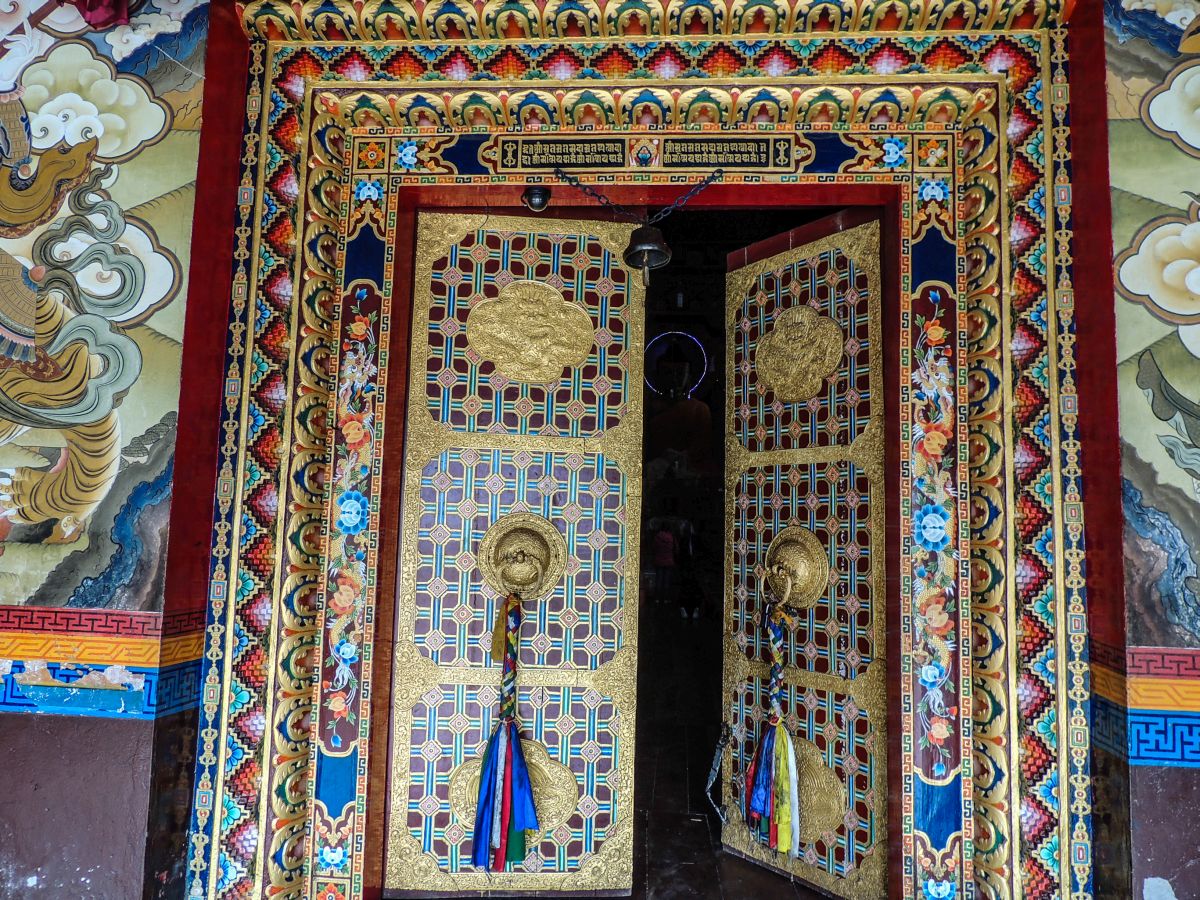 The car suddenly swerved off track as the driver maneuvered the vehicle back to its original path. “It was a green snake, and we aren’t supposed to kill them. Evil will befall if we do so”, said Uddhav or Uddab as he called himself. My driver for the entire trip Uddhav a reticent fellow was from Assam. I had left early morning from Bhalukpong towards Bomdila in Arunachal Pradesh.

River Kameng meandered across the valley as it changed color from black to green. Pine Trees jutted out of the mountains. Wild plantains, flowers and broom grass grew in abundance as the sun played hide and seek. The fresh mountain air was a pure delight to breathe in and bask in the early morning glory. I was having the best of my life as I had set on my journey to the land of the rising sun as the state is rightly called. 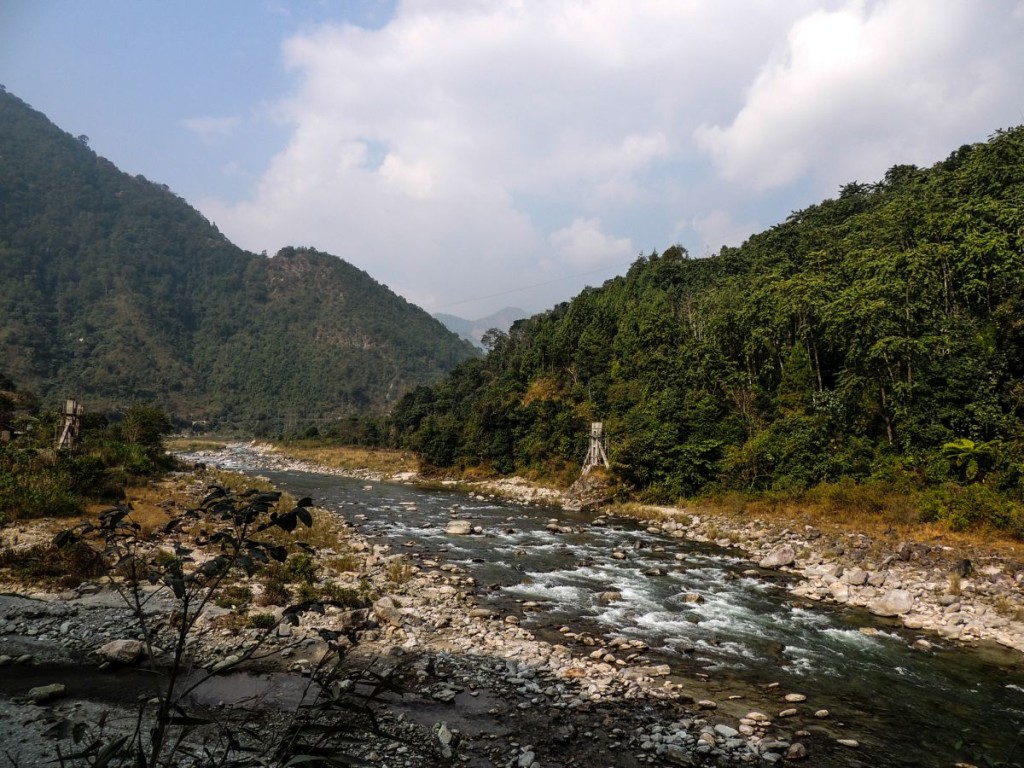 It had been pouring since the day I had arrived. Sometimes I was lucky to sight the sun which was early to rise and set in this region. Numerous waterfalls were seen on the way. The long journey to Bomdila took me through mountain passes that were verdant and sometimes bare as rubble slid down and blocked the road. Army jawans were seen patrolling the roads. The BRO was doing its best as roads were being laid and repaired. As we crossed the army camp at Tenga the road conditions worsened.

I reached Bomdila late afternoon and headed straight to the monastery. Despite wearing thermals, sweaters and jackets I found the place cold and chilly. Whenever I crossed a settlement or a hamlet I would sight prayer flags and wheels. Nestled in the lofty mountains the Gentse Gaden Rabgyel Ling Monastery or Upper Gompa provides some breathtaking views. 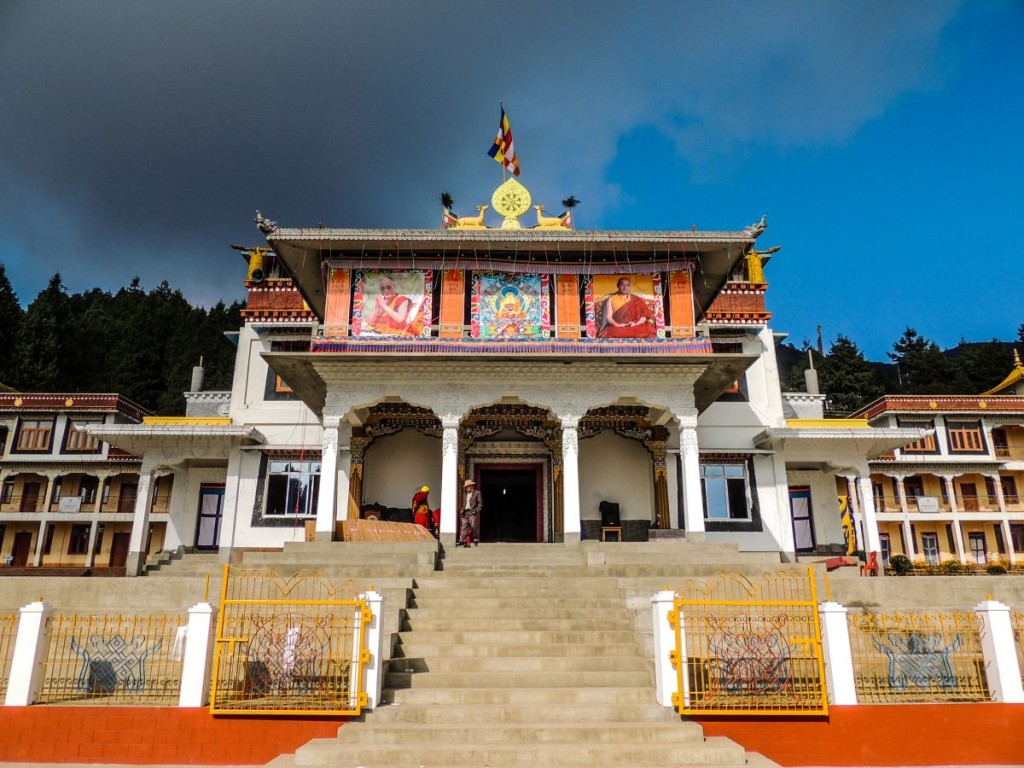 Majority of the population here belongs to the Monpa tribe. The monastery houses a school for the young Monpa monks or Lamas. They were seen playing with a ball made of rubber strands. 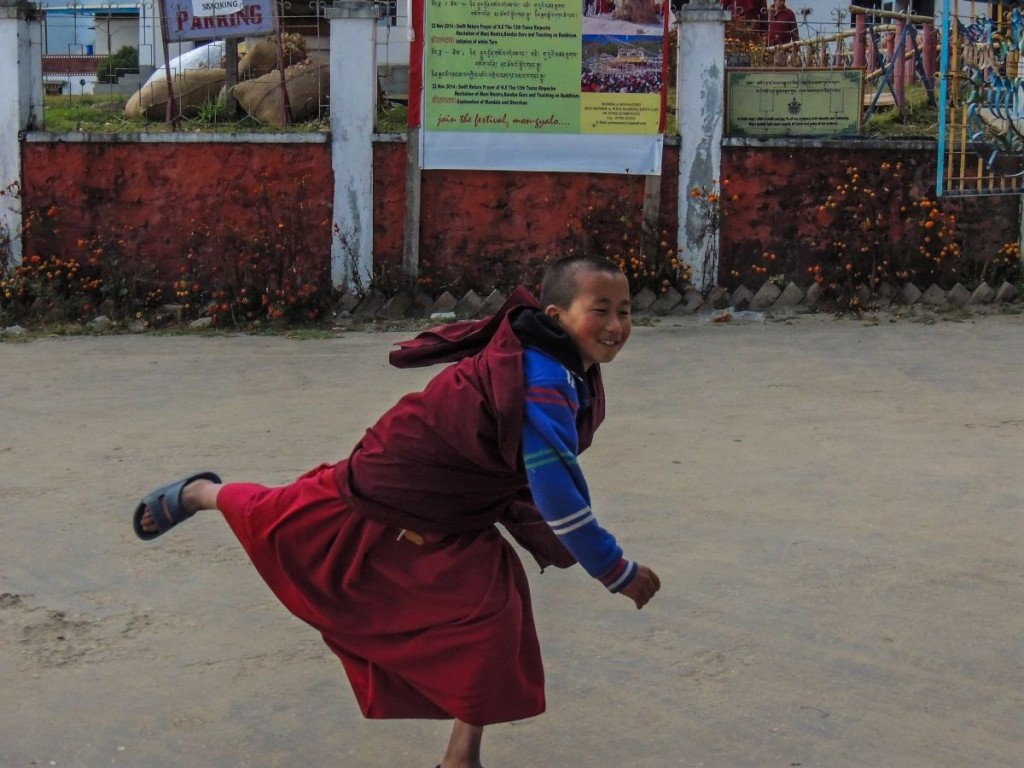 Young Lama in Bomdila at play

A Bomdila woman suggested I should circumambulate the prayer bell thrice for my well being. Monpa women were in a small room oiling and lighting lamps to be offered in the monastery. Bomdila has a past with major Buddhist and Tibetan influences. It is told this region was part of Tibet during the medieval period. The Chinese had tried to claim this land in the 1960’s. Bomdila’s market is a must visit as it is a major shopping destination. I had to give it a miss as I had to reach Dirang by late evening. 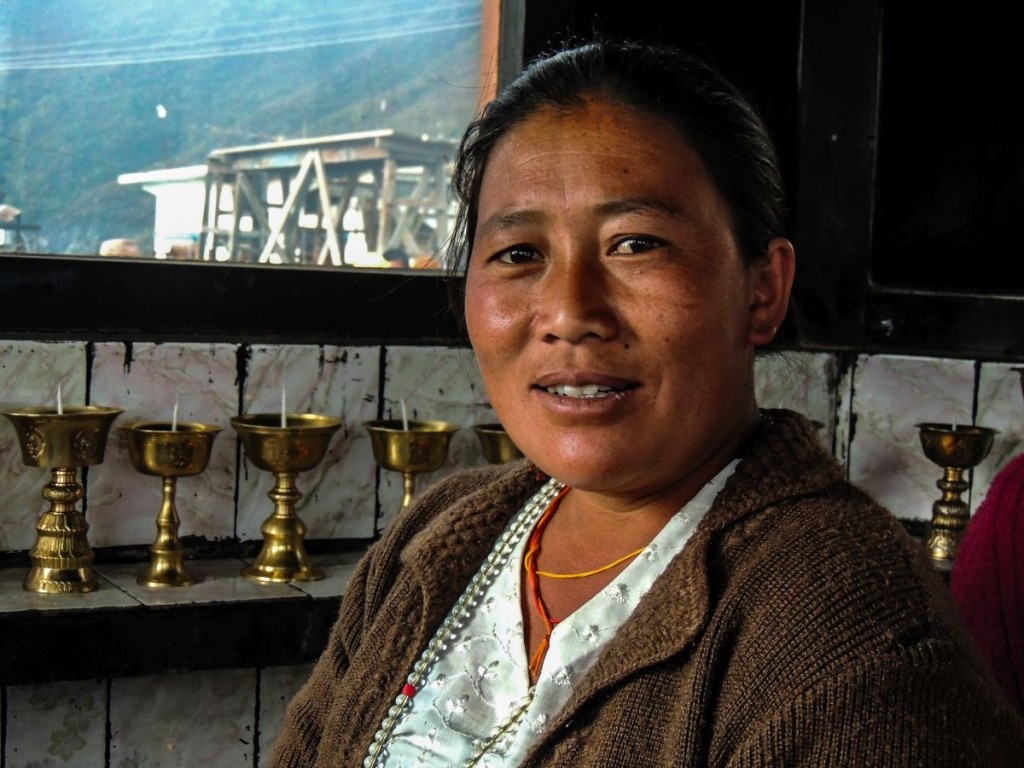 Dirang is the base to head towards Tawang. A short stopover in Dirang Valley gave me a glimpse of the life of the locals. The women in western Arunachal Pradesh are a hardworking lot. With babies tied on to their back they are seen knitting, weaving, cooking and working in the fields. 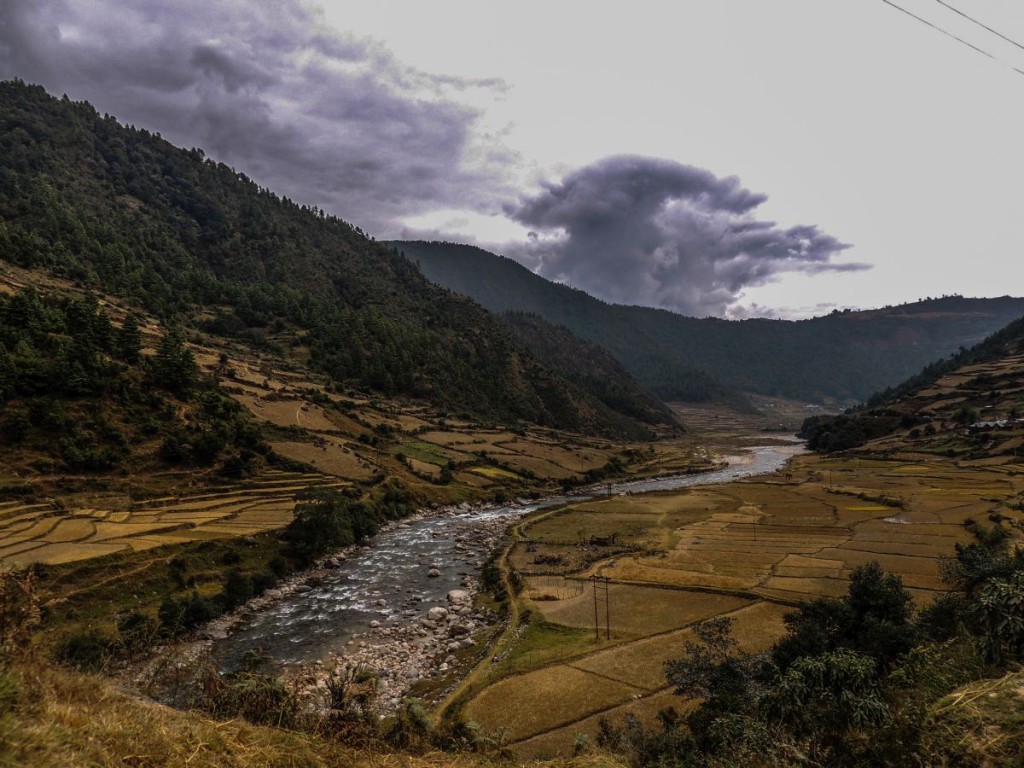 Potato, Corn, Cabbage, Cauliflower and Tomato are cultivated in the fields. Their diet also majorly comprises of Fish, Pork and Chicken. Dirang Dzong, a fort that is more than 500 years old is a small settlement today with stone houses. It was the center for administrative, judicial and military activities in the bygone era. 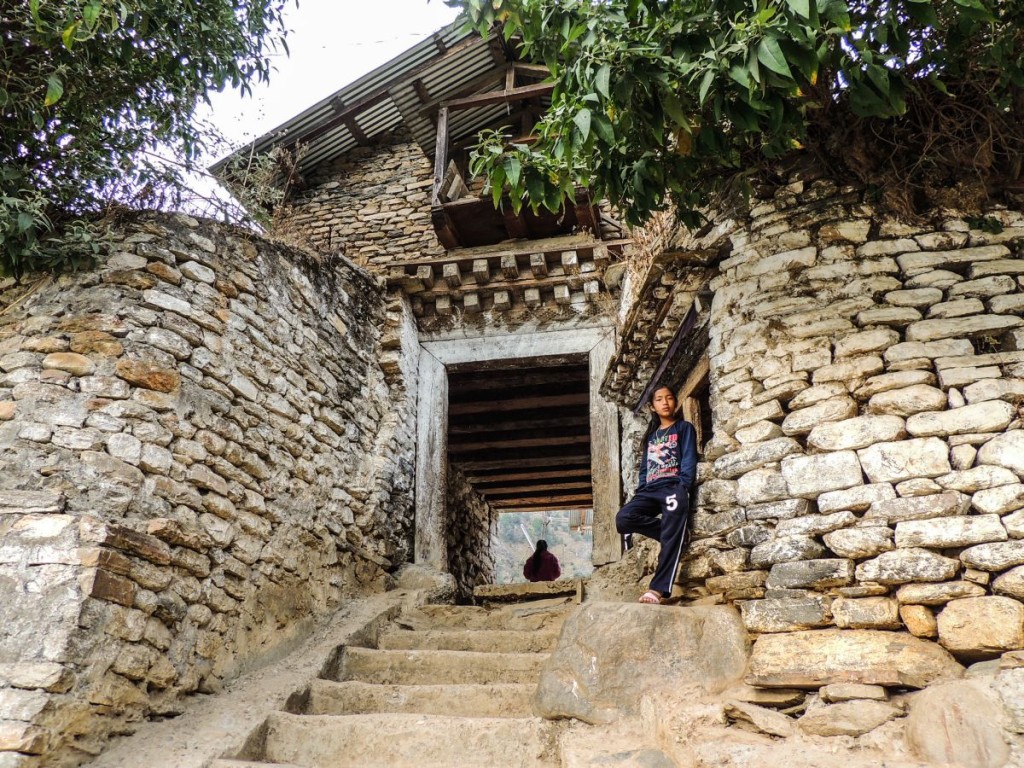 Corn was seen drying outside every house. Children were playing while women returned home carrying firewood on their head. 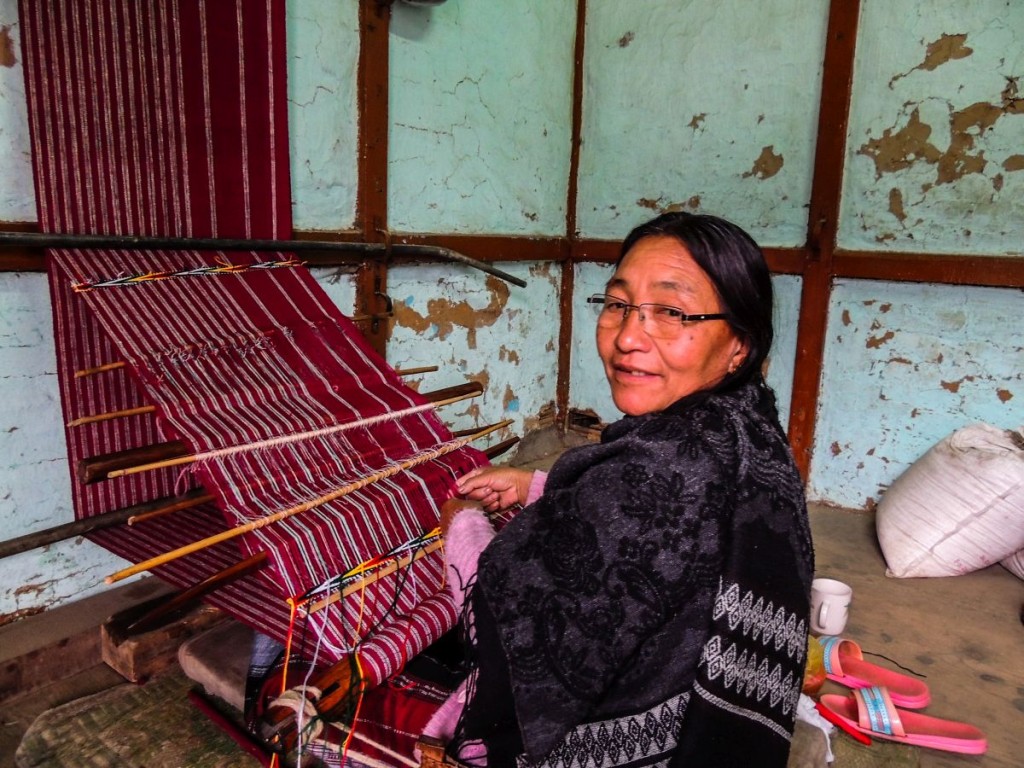 As I walked through Dirang Market I entered a local shop. The lady at the counter took me to the backside of the shop where a Monpa lady was weaving a traditional garment worn by local women called as shinka or shingka. She then offered me a glass of local beer made from rice. Having tasted the drink I returned to the market. Settlements in and around Dirang are seen selling kiwi and apples. Uddhav mentioned there was a Kiwi orchard nearby. Until then I never knew Kiwi is grown in India. I was of the understanding we imported this fruit from overseas. There are so many unknown facts of India that it continues to amaze me.  I checked into Hotel Pemaling for the night which is the best in town. Normally I prefer homestays for an experiential travel and to get a close up view of the lifestyle of the locals. But in  Dirang I couldn’t find one. The staff in the hotel did ensure I got a taste of the local food as they served me Bamboo shoot soup, Red rice with a curry made of Yak’s cheese, noodles, cabbage and carrots. The meal was perfect and ended with some red pineapple in hot custard. I was always used to having cold custard but in Dirang it was freezing with a small heater to my rescue in the room. The hot custard was a blessing in disguise. 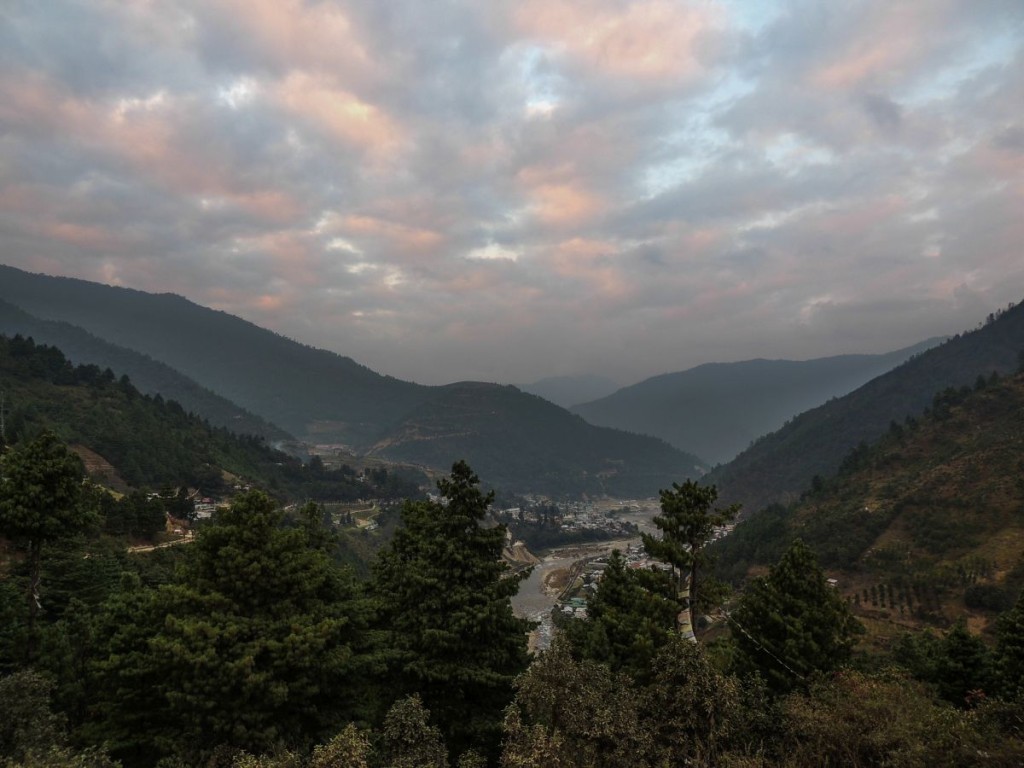 Next day I set off towards Tawang. Yaks of different colours walked past. 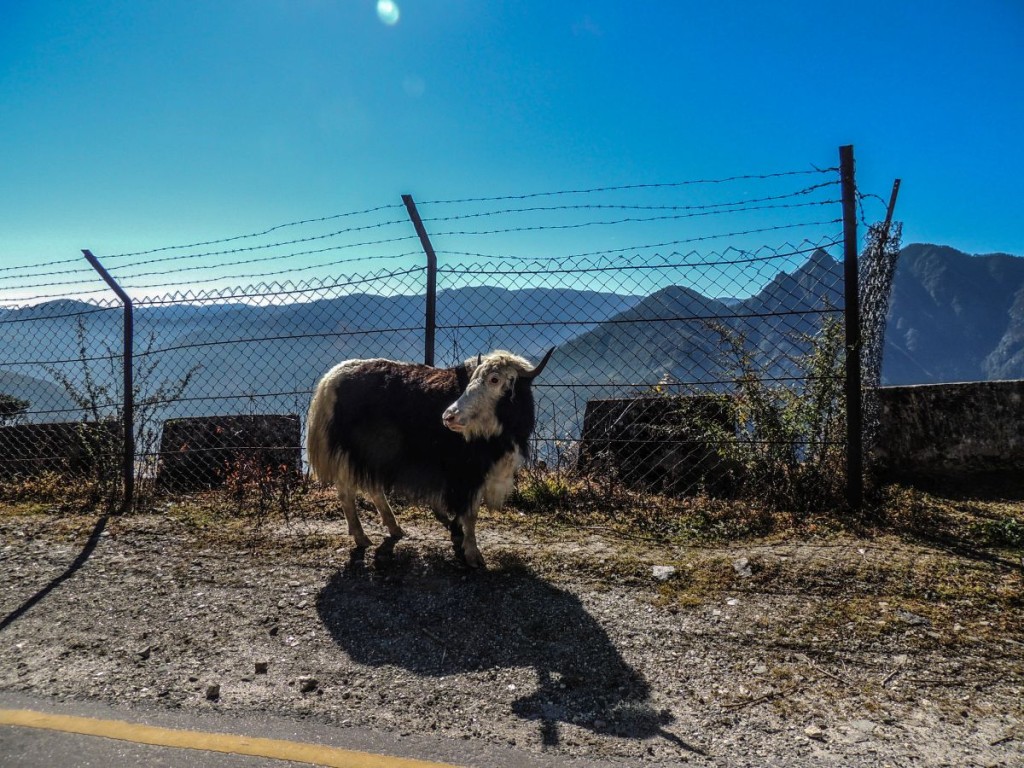 As the car neared Sela Pass I noticed the road, mountains and the pine trees were drenched in white. Sela had received its flurry of snow and she looked mesmerizing and beautiful. The Sela Lake was frozen and one could walk over it. 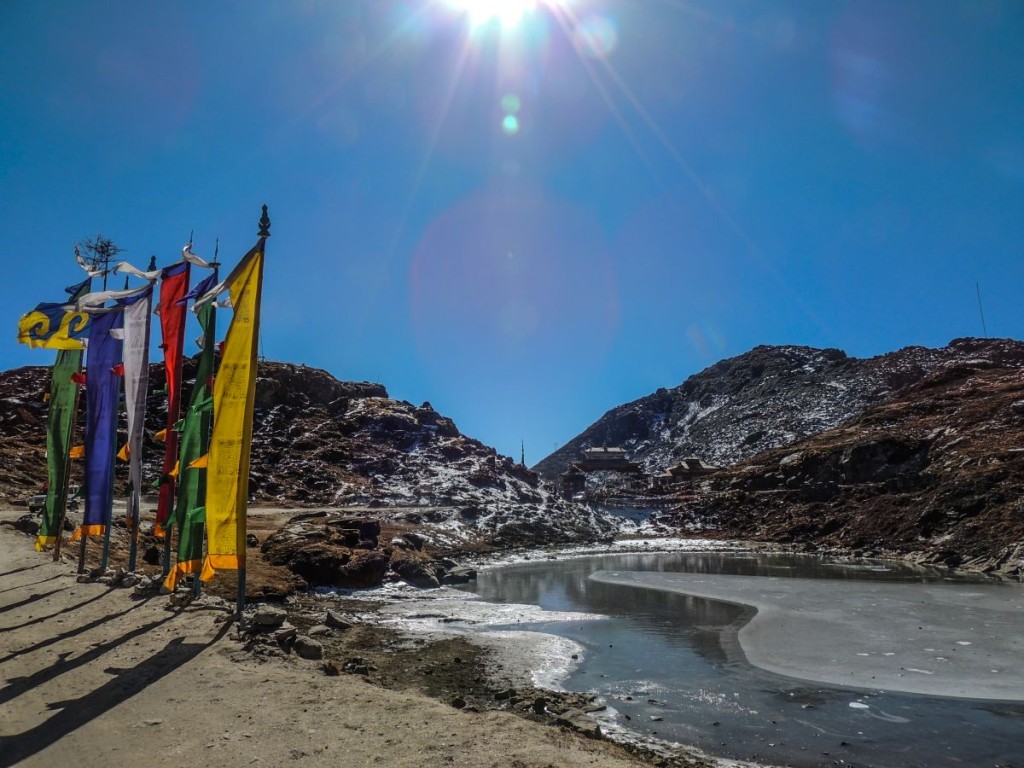 It was freezing cold as I stepped out of the car and walked over the mirrored lake. It is told if you catch sight of a pair of Rajhans or Indian Swan in this lake then luck would be on your side. At 13700 feet this second highest motorable road is steeped in history and valor. She is bewitching as she holds secrets of the Sino Indian war. 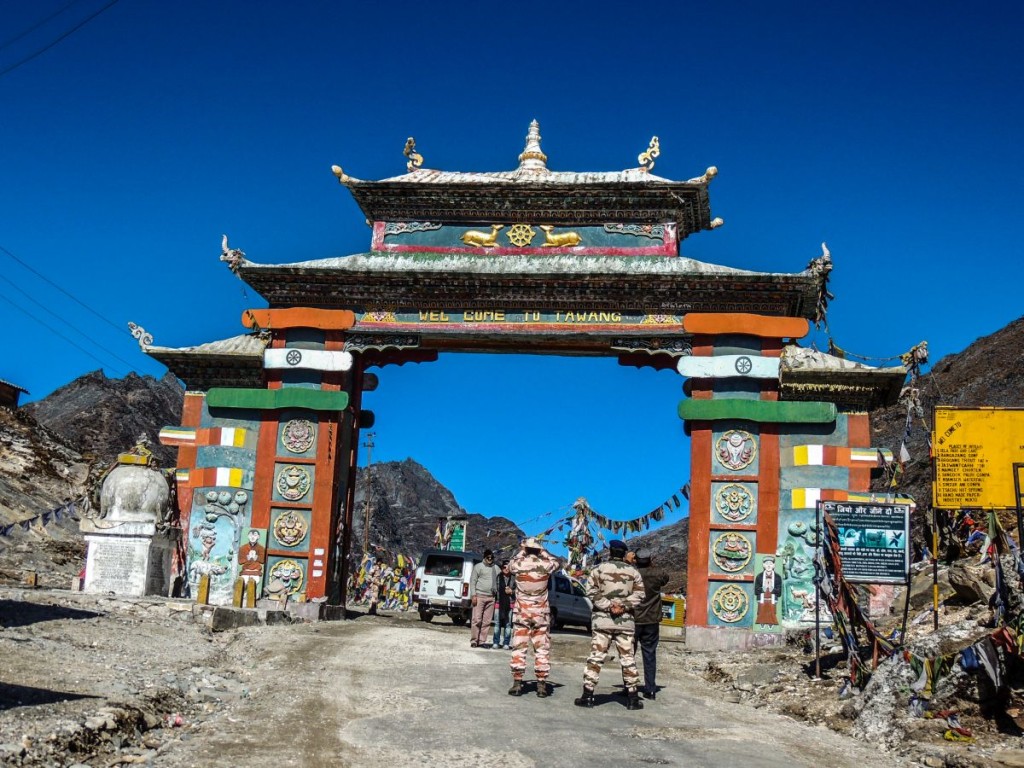 Few kilometers ahead is the Jaswant Singh Memorial. One can see the war bunkers, Chinese graveyard, old telephones used in the battle and also watch a video on the history of the place. This memorial is erected in the fond memory of the Late Jaswant Singh who put a brave face in the war and laid down his life while holding the camp. Army jawans fondly call him Baba. 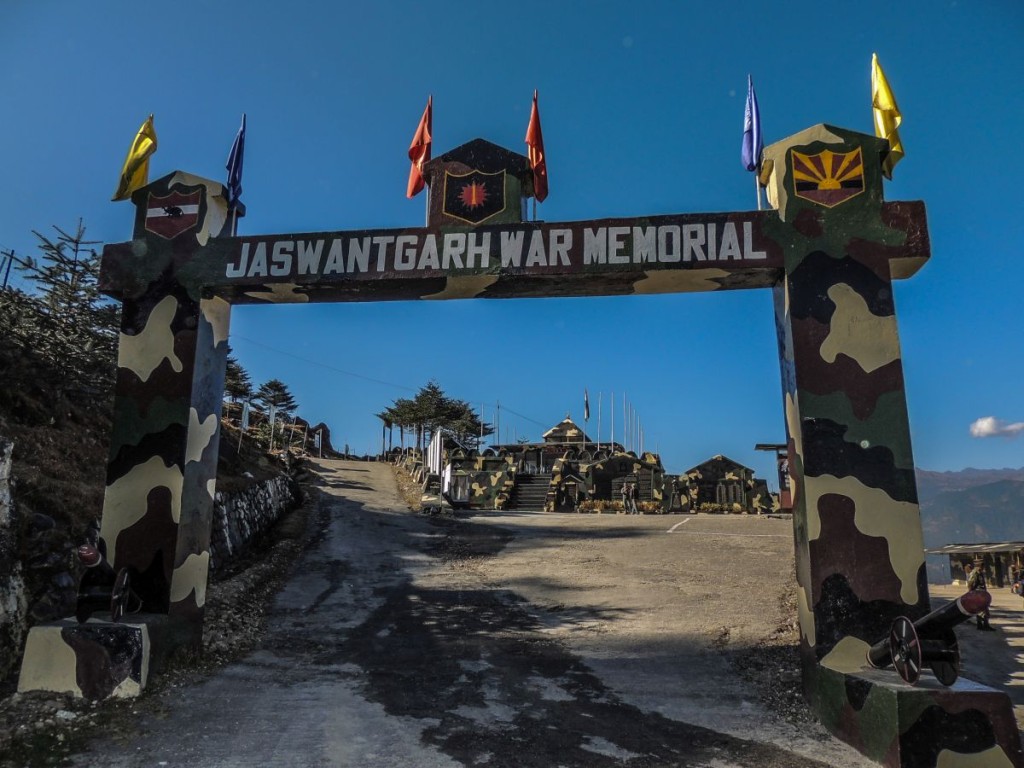 They run a snack shop across the road. The funds raised are diverted towards the maintenance of the memorial. It is told that jawans are scared to fall asleep at night in the Sela Pass check post lest the ghost of Jaswant Singh arrives and punishes them with a slap on the face. Legends and stories of Sela, Jaswant’s bravery reverberate through the mountains as they are indeed hair raising. 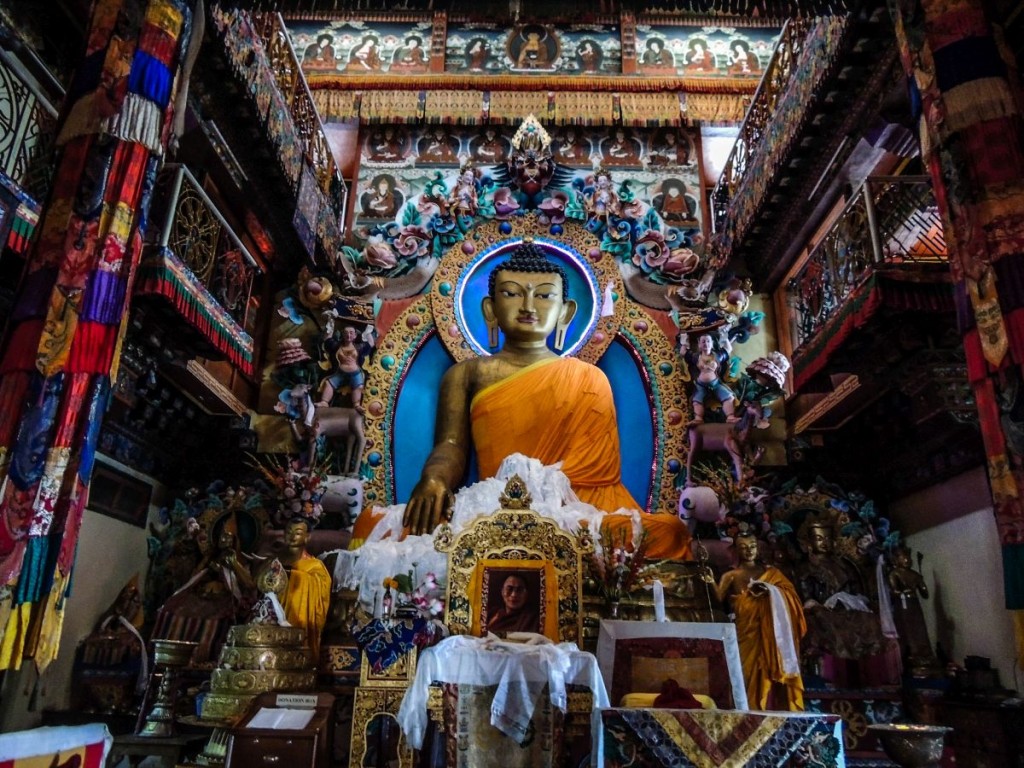 At Tawang I visited the monastery which is one of the largest and oldest in India. Huge library and a gilded statue of Buddha is the limelight of this monastery. It is also the birthplace of the 6th Dalai Lama and hence revered. The Tawang gompa belongs to the Gelupa sect and is a must visit. I stumbled upon an old lady wearing a shinka and a tsipe zhamu which is a traditional hat made of Yak wool. 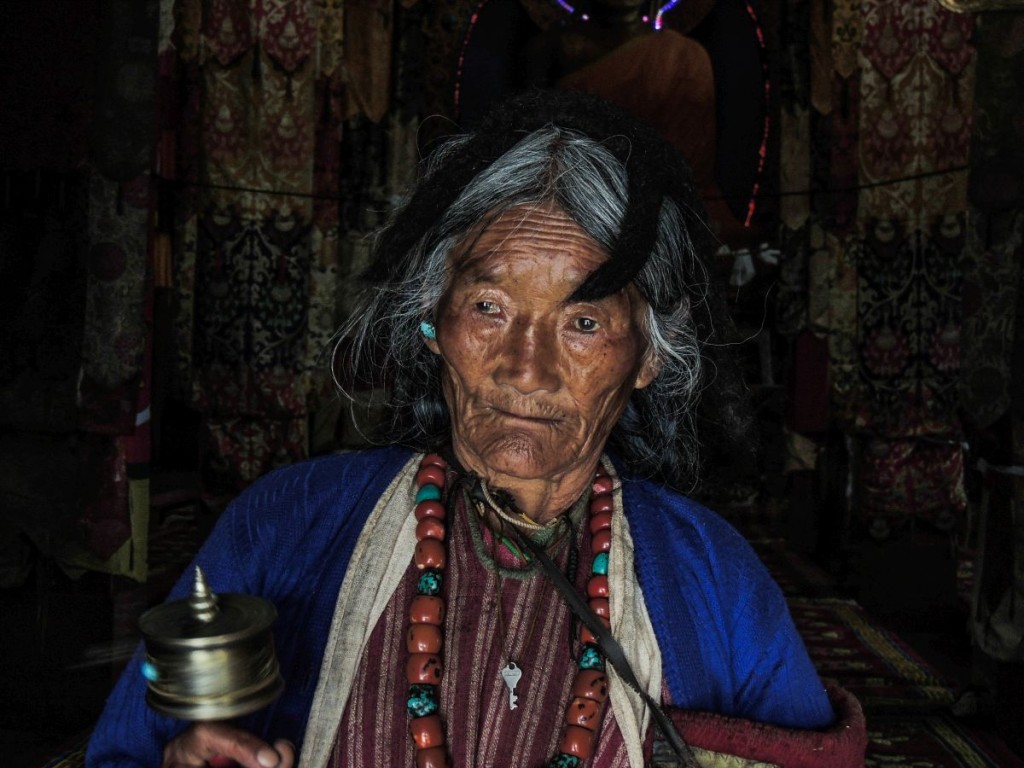 Monpa woman with a prayer wheel

In Tawang Market one can find vast variety of fruits, ferns that are had by the locals in their regular diet. Churpi which is Yak cheese is found in this region. It is normally had as a chewing gum. Yak butter, milk is part and parcel of their diet. Jackets, sweaters, shawls, socks, Ming vases and carpets are sold here. Hotel Gayki Khang Zhang is the best in Tawang. 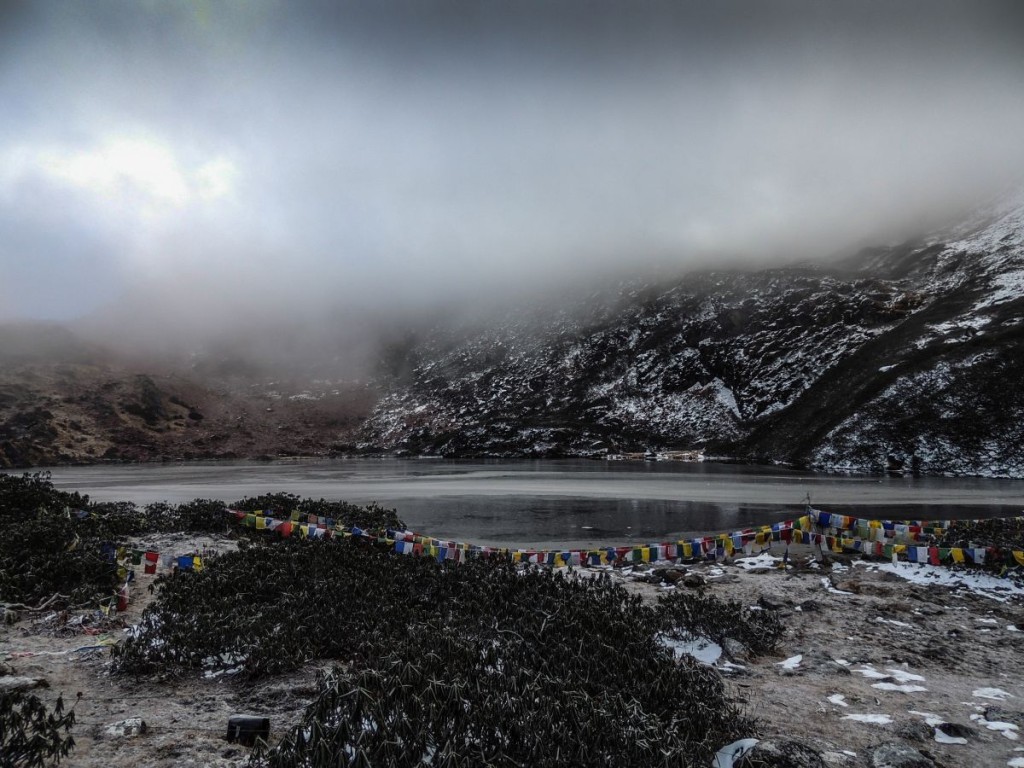 Beyond Tawang one needs to drive through mountains to reach Sangetsar or Shungetsar Lake with temperatures reaching sub zero and oxygen levels dipping down. As I ran around taking pictures Uddhav warned me that I might soon feel breathless due to the low oxygen level and should avoid exerting myself. With permission attained at Y Junction from the army personnel the bone rattling drive took me through valleys and mountains that have sparse vegetation. Stunted shrubs were found and the region was peppered with lakes that were frozen. 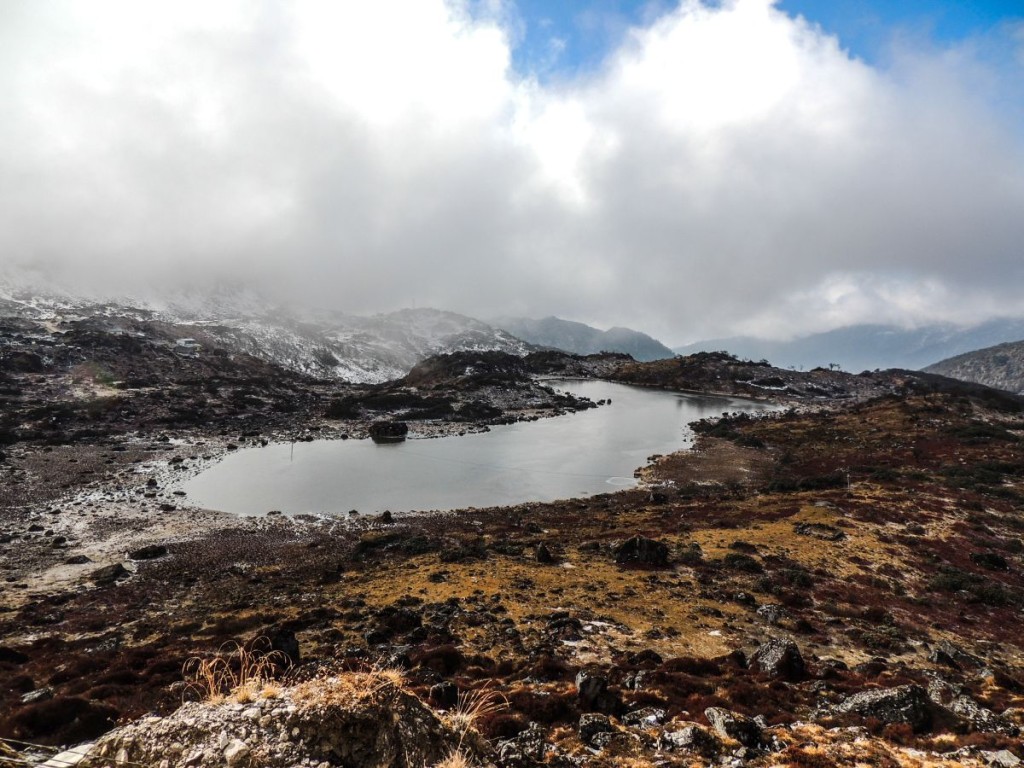 Another Frozen Lake on the way to Sangetsar

I could rarely sight any locals. The car was started by warming the fuel tank with a bonfire lit below it. Fog lights had to be kept on always as visibility was bad. The 101 lakes in this area are considered pious and holy by the Buddhist Lamas. Sangetsar lake is said to have been formed after an earthquake hit the region.  Army jawans camp near the lake and offer tea, coffee and snacks to the visitors. They were friendly and we did strike a good note as they were not used to seeing civilians near the lake. 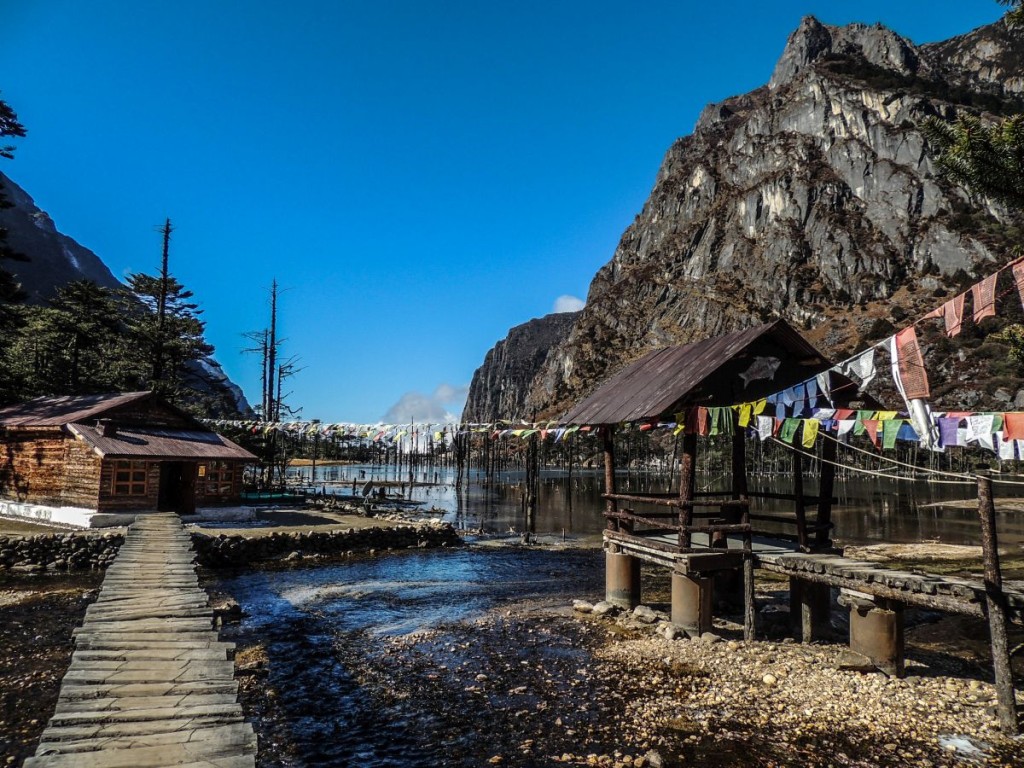 Arunachal Pradesh had stirred the explorer in me.  The locals with limited resources live a hard life but they teach us that a life of contentment could be lead despite all the odds. The journey had been tiring but at the same time exhilarating. Life in the mountains is difficult but it is worth it. I had visited the forgotten paradise of India that few dare to visit.  Its harsh climate and difficult terrain makes it an arduous trip but towards the end you have this sense of fulfillment that you have seen the best of India as it indeed is Paradise on earth.

How to reach there –

One can fly until Guwahati and then travel by road. There aren’t State Transport buses plying in this region hence it is best to hire a car with 4WD.

Note – All the photographs in this article have been taken by me.

← The sheer pleasure of more
The Mangalore Palate →
Tweet

6 Comments on “Arunachal paradise on earth”