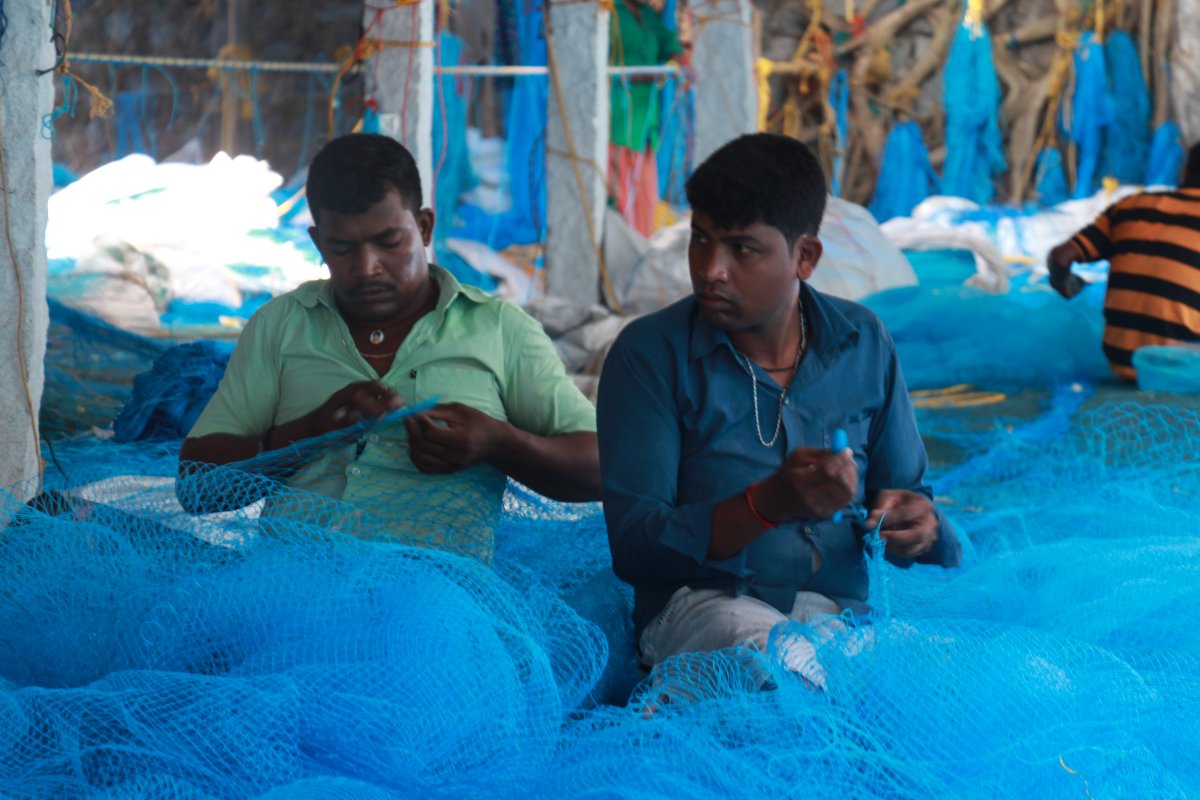 Sweat trickled down my back. Officially summer hadn’t yet arrived but Dakshin Kannada created by Lord Parashurama who had thrown an axe from the top of the Western Ghats to reclaim land from sea was showing early signs of the onset of summer. Part of the erstwhile Madras Presidency it was later merged into the state of Karnataka. This region is said to be steeped in history as Greeks and Romans visited its shores for trade. It is told linen, ivory, cotton and betel nut was exported to Egypt from this coastal expanse. Various communities like the Bunts, Muslims, Brahmins, Konkanis and Christians live in and around Mangalore and thus a melting pot of culture and traditions. 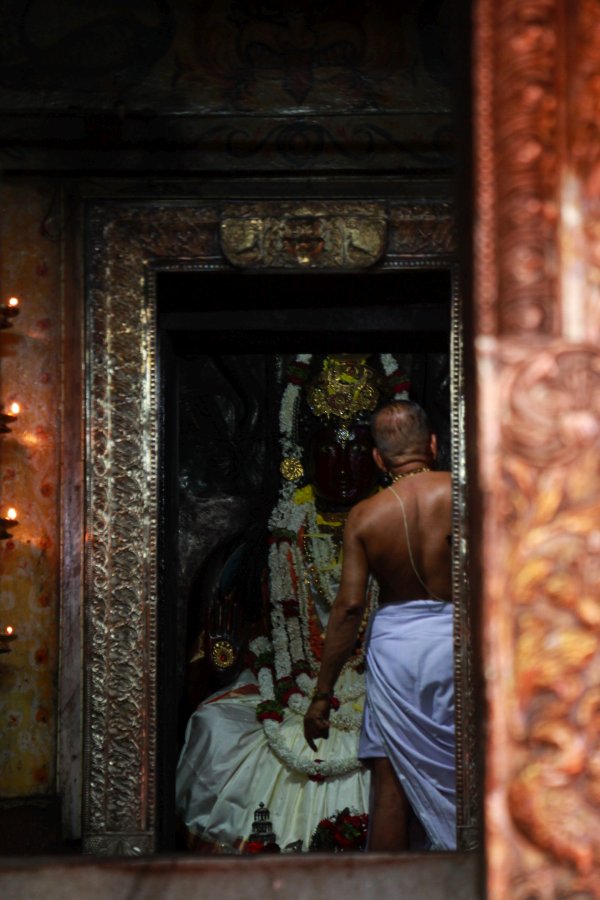 I crossed the Phalguni River and headed towards Rajrajeshwari temple in Polali within the Bantwal Taluk. Betel nut and coconut trees swayed in the hot breeze while Bunt houses with the ubiquitous Mangalore tiles were seen in the distance.  Large verandas, tall wooden pillars and huge courtyard with ample ventilation are the trademark signature of these mansions.  The temple had heavy influences of Kerala architecture with sloping tiled roofs.  After offering my prayers to the Goddess I sat on one of the benches and soaked in the surroundings.  I could hear the faint beats of a drum followed by a song. I enquired around and got to know kids were performing Yakshagana a stone’s throw away. I ambled across the street and entered a hall to find a huge crowd seated and watching a colourful performance on stage. 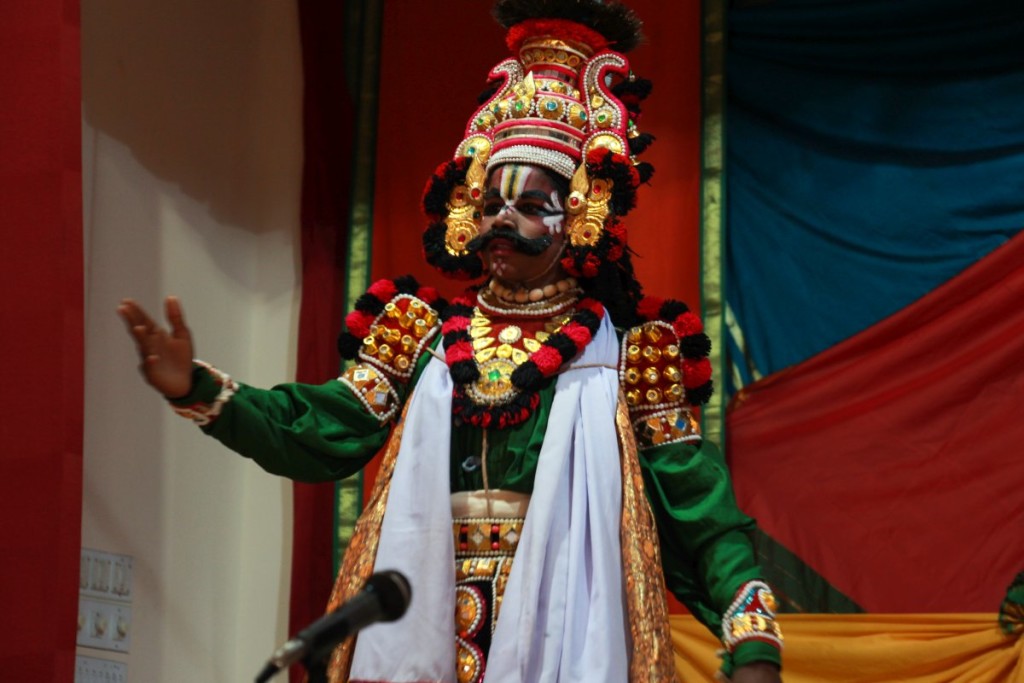 Yakshagana is a folk dance and drama with scenes from the epics and puranas enacted. It was considered as a form of entertainment in the olden days. Similar to the Kathakali from Kerala the difference in the art form is the presence of songs and dialogues. Yaksha meaning heavenly beings and Gana meaning songs, Yakshagana is the performance of heavenly beings.  I watched in awe as little ones in bright colourful costumes danced with rhythmic body movements, footwork and facial expressions. Whenever a battle or boisterous event was depicted the chenda a percussion instrument would be played while another drummer played the maddale.  The heavy ornaments, headgears, beards and moustaches gave it a rich feel.  I noticed artists playing demonic characters wore make up in black, red and green colours while the heroic characters had a pinkish yellow face. Yakshagana has a story teller or Bhagavata who conducts the play with his companions. Also the life force of the performance his hands were busy playing the cymbals.

After watching an arresting performance I left the hall in a daze. South Canara did have some hidden gems which not many knew. I was keen to explore the lesser known facets of this place. I made my way towards Moodabidri meaning Bamboo Forest of the East. Home to eighteen Hindu temples, eighteen Jain temples and eighteen ponds it is called the Kashi of the Jain community. I stood in front of the Thousand Pillar Basadi which was once the seat of Jainism religion. It wore a deserted look in the noon. Built in the fifteenth century it took forty-five years to complete the magnificent edifice in granite. An amalgamation of Nepalese and Mangalorean architecture the three storied Basadi houses thousand pillars each with a unique design that is not duplicated. Jewellery designs, stories from the epics, animals, festivals and Tirthankars were carved which was indeed poetry on stone. I looked with awe at the grandeur and bravura of the structure that stands as a hallmark of an era lost in the whirlpool of time. 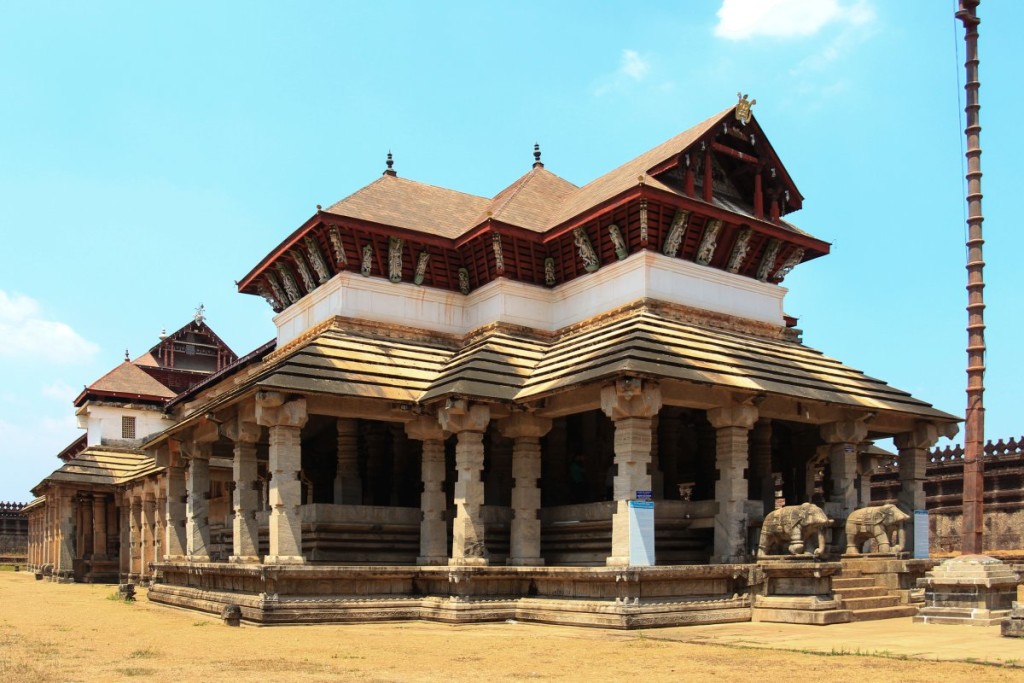 I wasn’t yet done with my explorations in and around Mangalore, the district capital. Over lunch I met Ashwin a local. When he talked about Jasmine Farming I wondered if I would enjoy a visit to a farm. That evening when he took me to the home of seventy year old Julie aunty I was in for a surprise. A bed of snow white blooms lay in front of me and a strong whiff hung in the air. I watched her draw water from a nearby well to irrigate her Mallige garden. We were at Shirva which was earlier part of South Canara but after the formation of Udupi district merged into the later. Farmers in the towns of Shankarpura, Shirva and Bantakal grow these blossoms in abundance.  Christians are predominantly found in this region and most women grow jasmines in their backyard. One chendu is a string of 800 flowers and each atte comprises of four chendus. Every morning the Mallige are plucked, tied and sold to an agent who then trades the attes in the market. The market rate of the flower varies on a daily basis depending on the supply and demand. These flowers bloom all throughout the year and are also exported overseas. The climatic conditions and soil in this area is perfect for Jasmine farming. The other variant is the Mangalore Mallige which has more fragrance. These flowers spread fragrance in every house, marriage and temple be it Shankarpura or Mangalore. 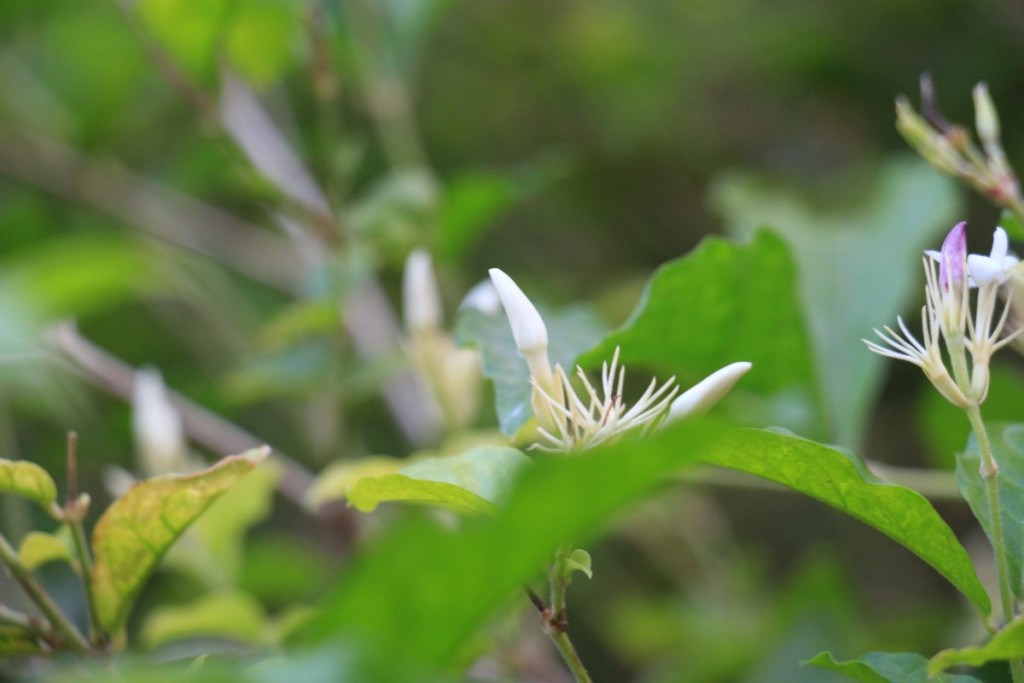 I left Julie Aunty busy tending to her garden. As for me my Dakshin Kannada stint hadn’t yet come to an end, there was lot more to the fragrance of this land and I wanted to drown in its heady aroma.

← Sponsored : Comparison of Oyo and Zo Rooms
Tips to travel to Germany →
Tweet