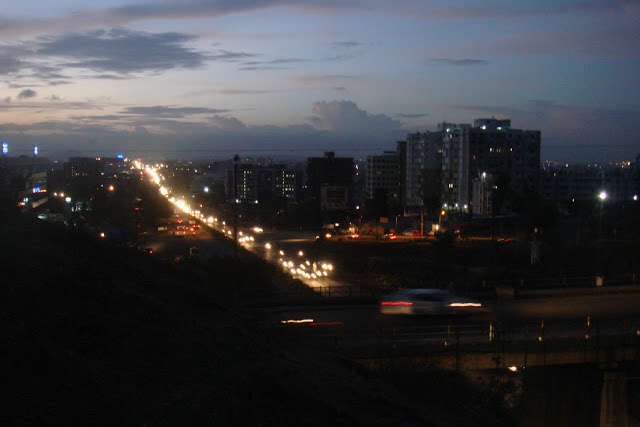 I drove down to my office with the radio blaring. The Radio Jockey was interviewing a personality from the science field. That is when I realized today is the longest day of the year June 21st. Vague memories of my geography classes in school, reminded me of the earth’s axis tilted and so forth.

I took it to be a normal day like any other in office. As the day progressed I understood that I would have to stay back late to complete my work. Few of my colleagues were working on shift and I had company till 10 p.m. after which they dwindled out. I completed my work by 10:30 gave my husband a call, informed him I am leaving for home.

I walked towards the exit and found that there wasn’t anyone on the floor. I got down to the parking lot, turned on the car. This time it was a different RJ who always covers the night slot after 9. His voice throaty and deep goes well with the retro theme Kaal Bhi Aaj Bhi. I love the yesteryear classics of Kishore Da and R. D. Burman. They bring in this nostalgic feeling and take you to a different world.

There was traffic but not slow moving as in the peak hours. I decided not to take the routine detour through Bhumkar Chowk, rather the direct route via Hinjewadi Chowk. As I scaled the Hinjewadi flyover I found an Indica cab parked to the side with a Tyre lying close by. Someone was below the car trying to change the Tyre, looked like they had had a flat Tyre. On closer view I found that my team members were waiting nearby, they had availed the cab facility and were heading back home. I stopped my car just ahead of the Indica. My friend came running towards me as soon as she saw me. I offered a lift home which she politely refused and informed that she had the company of friends and could manage as she wasn’t alone. The spare tyre had been fit and they would leave shortly.

I asked her to take care and pushed the pedal when I found that a Maruti SX4 had been parked ahead of me. I thought it was one of our family friends car and slowly crossed by it to get a view of the driver. I thought I knew him when he honked the horn. I slowed down ahead and again stopped the car. I waited for him in the car to wave back but found no response. I mulled over the idea of giving him a call from my cell when he got down and walked towards me.

As he moved ahead I realized it wasn’t the guy whom I had thought to be but someone else. He was dressed in a smart beige shirt, pair of trousers and looked well educated. He came beside my car stooped down to face me and said “Hello”. I replied with a Hello and said ” Sorry I didn’t recognize you”. He replied, ” I am Rahul”. I racked my brains to figure out a Rahul that I know when he retorted, “Don’t you know me, our association goes way long”. I gazed at him and tried to figure out where did I meet him was it during my schooling, college or previous work, when he suddenly remarked ” Forget it, lets go for dinner”.

That was when the bells started ringing, not just in my head but also my cell. It hadn’t dawned till then who this guy was and what was he doing on that night at 11 p.m.  I had been so naive not to figure this earlier. I checked the phone it was my husband, pushed the pedal, drove the car down the flyover informed my dear hubby I was heading back to the safe sanctity of my home.

As I drove the radio crooned to the song  ‘Musafir Hoon Yaron, na ghar hai na thikana’ but then I had a thikana My Home Sweet Home. To all my dear friends who need to travel in the late hours do not stop anywhere even if you have the slightest doubt, your safety comes first. As the night drops her dark veil the vampires are out on the prowl.

No wonder it had indeed been the Longest Day !!

3 Comments on “The Longest Day”