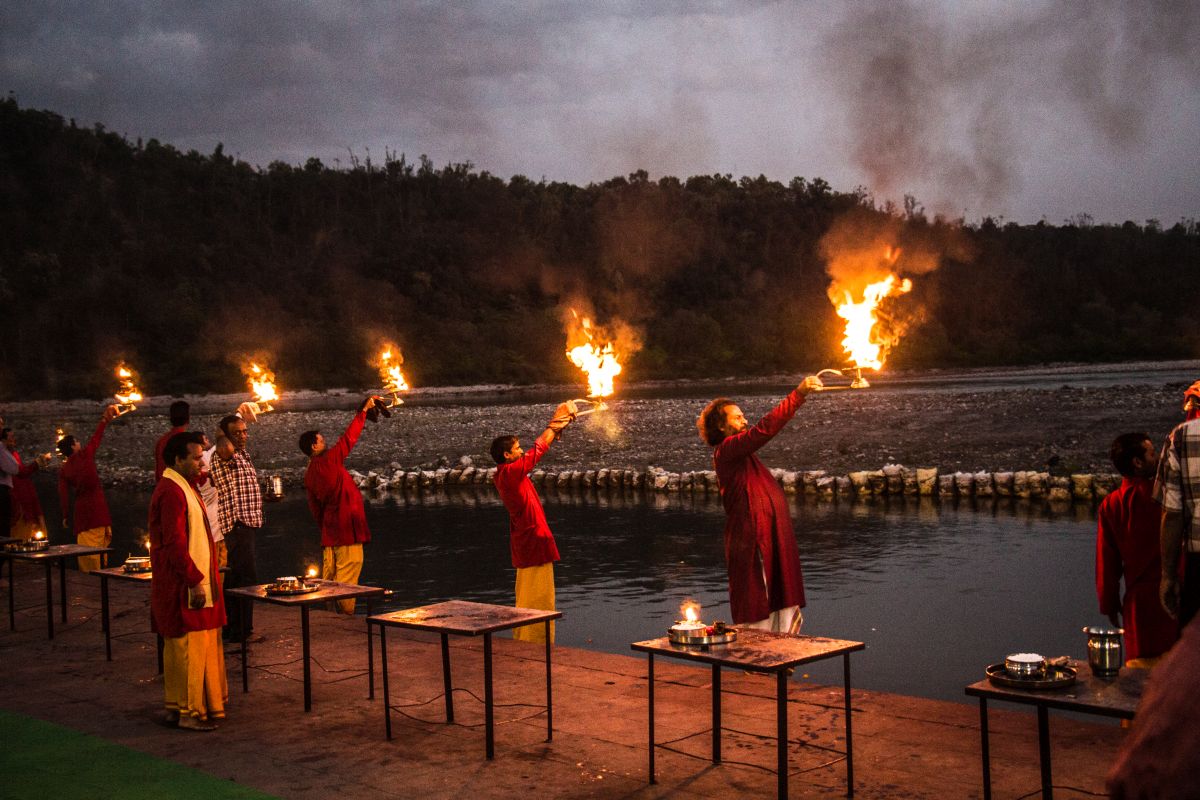 I took a private bus from Delhi that took me through Muzaffarnagar, Roorkee and finally to Haridwar. The wheat fields were golden brown as they swayed in the summer wind. A short stop in one of the dhabas at Muzaffarnagar for lunch followed by a nap I survived the road travel which was more than close to 6 hours. From Haridwar I took the local city bus to reach Rishikesh in the sweltering heat.

Surrounded by the Shivalik ranges on 3 sides in the foothills of Garhwal and at the confluence of the Ganga and Chandrabhaga river Rishikesh is serene and sublime for few while some find it mind boggling as you traverse through the streets across Lakshman Jhula past a crowd of foreigners practicing yoga or hanging out in the numerous cafes. Rishikesh is also the gateway for the Char Dham which is of utmost importance for Hindus in India. I stayed at a homestay called Amraai which is in the proximity of Triveni Ghat.

In the evening after a cup of tea I strolled towards Triveni ghat. Preparations were ongoing for the daily dose of Ganga Aarti offered to the river every evening. The other ghat which is well known in Rishikesh and draws crowd to the tune of hundreds and thousands in Parmarth Niketan. But as I preferred to avoid the crowd and experience the tranquil surroundings I made my way towards Triveni Ghat. 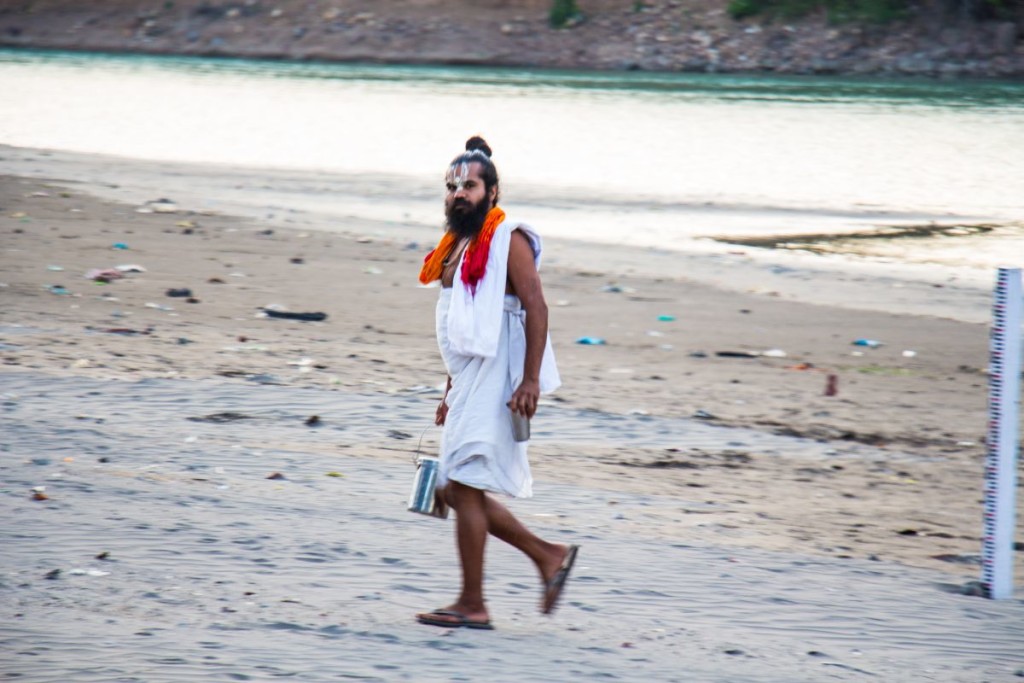 The ghat itself is a long stretch of pavement which has been built beside the gliding Ganges. Early morning one can see the health conscious taking a long walk, while some offer their prayers to Goddess Ganga by taking a dip in the holy river. 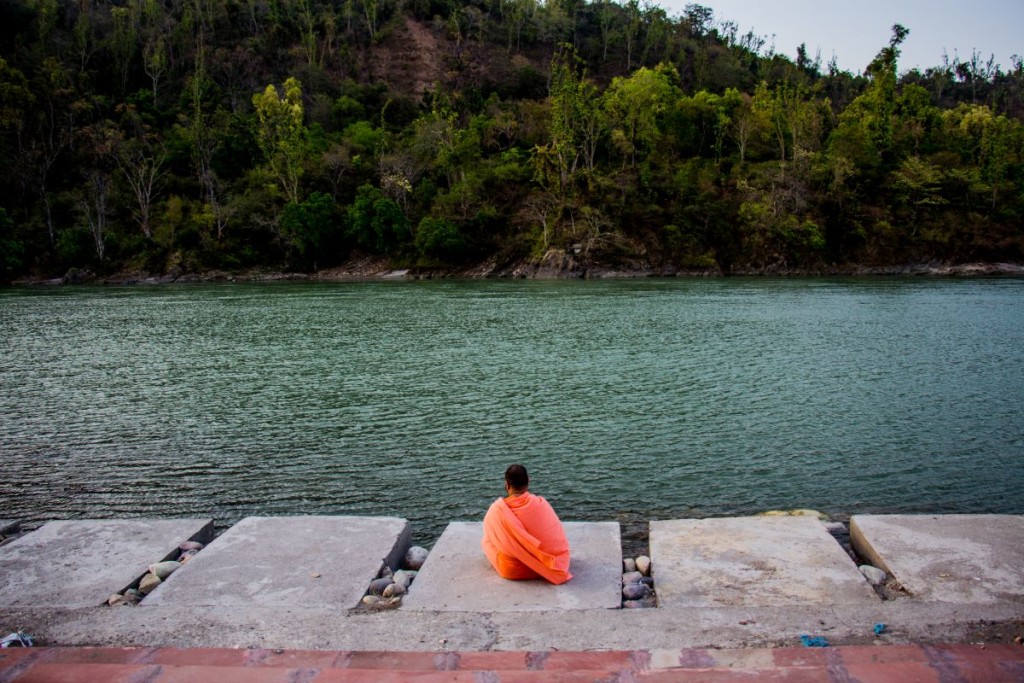 If you are interested to experience the Maha Aarti ensure you are there in the ghat before 6 p.m. The area is seen buzzing with activity as vendors are seen selling earthen lamps, flowers. Devotees offer these lamps in a leaf boat to the Ganges. 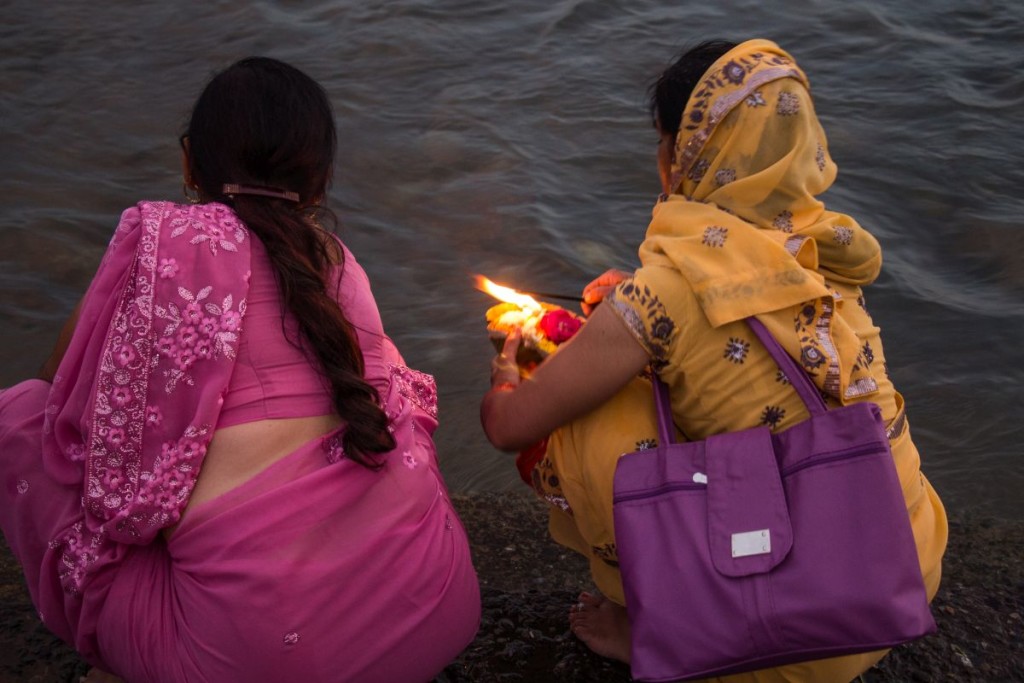 Some of them are seen preparing the huge lamps for the evening aarti. 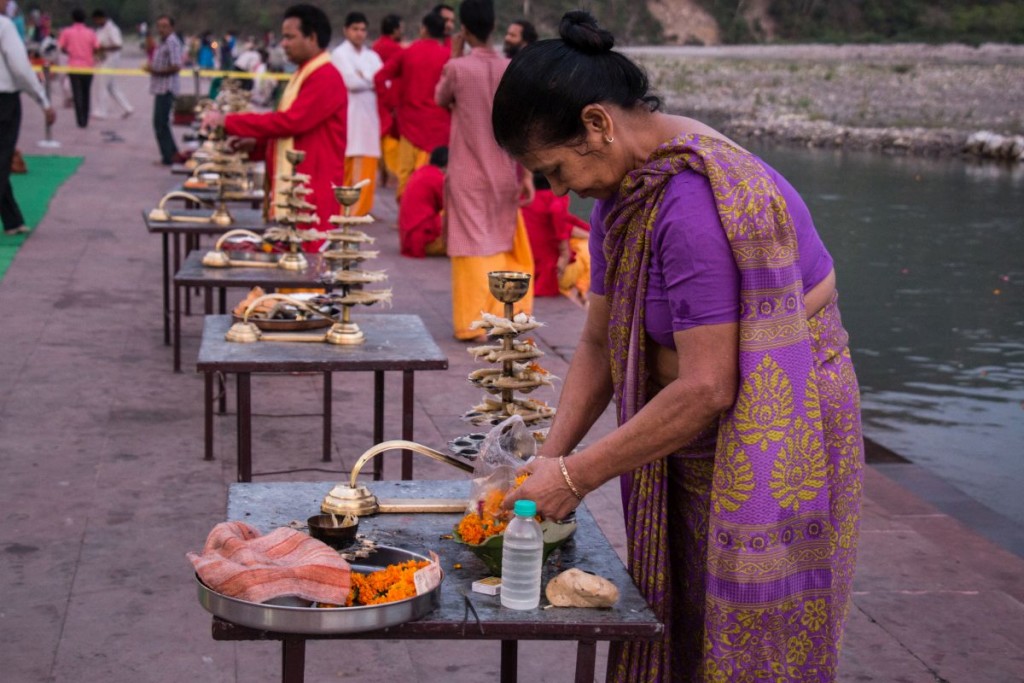 Preparation ongoing for the Maha Aarti in Triveni Ghat Rishikesh

The aarti itself is an experience that shouldn’t be missed when in Rishikesh. To the beatings of the drum and the bell prayers are offered, bhajans are performed as tall wicker oil lamps are lighted and offered. In the darkness of the twilight the lamps glow and cast shadows in the water. 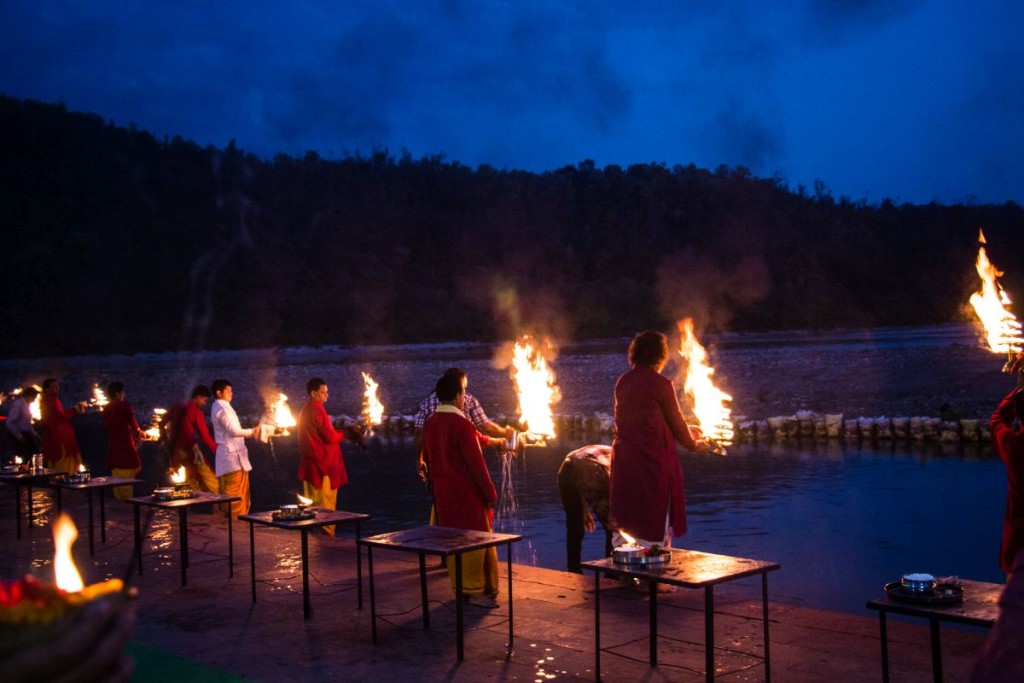 Devotees are seen praying for the betterment of their friends and family members. Like this girl had her hand in a cast while a sacred thread was tied around her wrist. 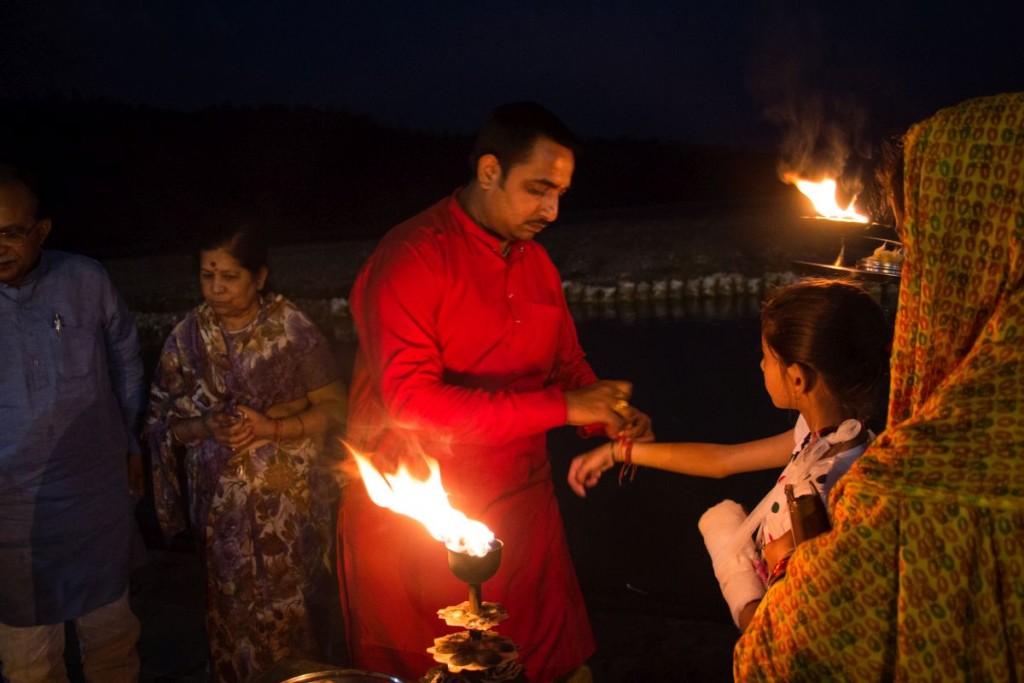 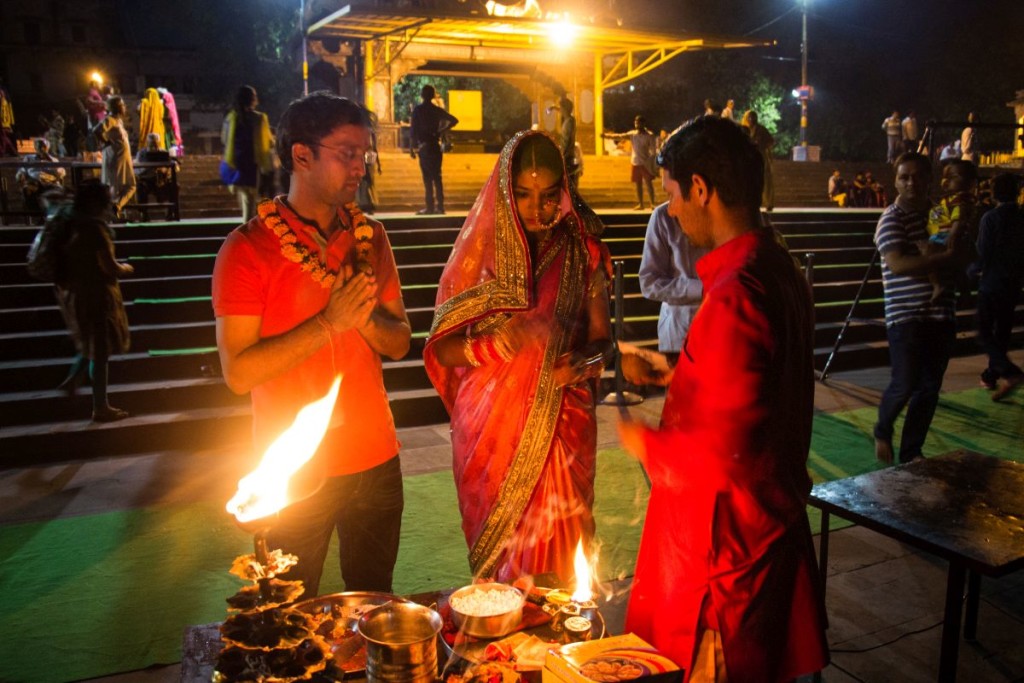 It is the belief and the faith in the hearts of numerous devotees that draws them to the Ganges as she casts her spell on them. 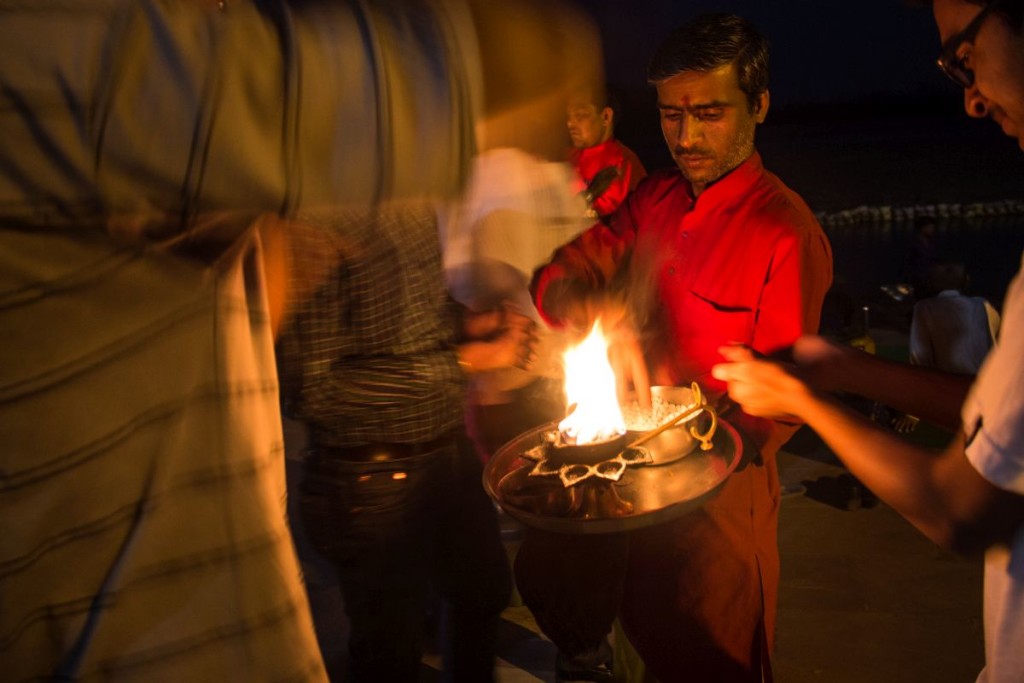 ← Kodaikanal in Images
Guthu or Bunt House in Mangalore →
Tweet

11 Comments on “Rishikesh the sublime experience”