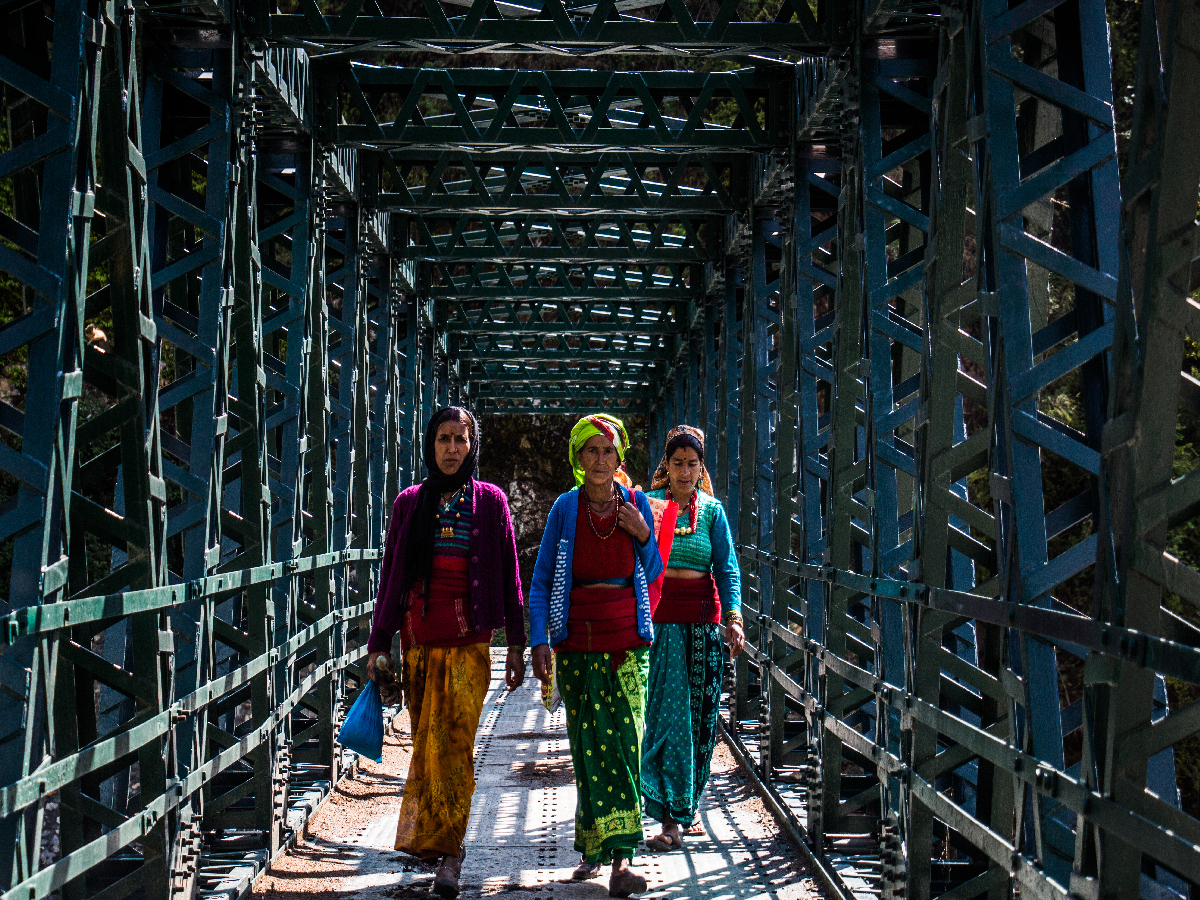 When in Kuflon Basics a beautiful homestay in the hills of Garhwal, Uttarakhand I decided to venture further up the hill. Dodital is a beautiful lake with abundant rainbow or golden trouts and brown trouts introduced by the Britisher Morrison. It is believed Lord Ganesh the Hindu deity was born at Dodital which is at a height of 3310 m. Dodital is 21 km from Sangam Chatti close to the Uttar Kashi town. You traverse through the hamlets of Agoda or Agora, Manjhi before reaching Dodital that takes you at least two days. 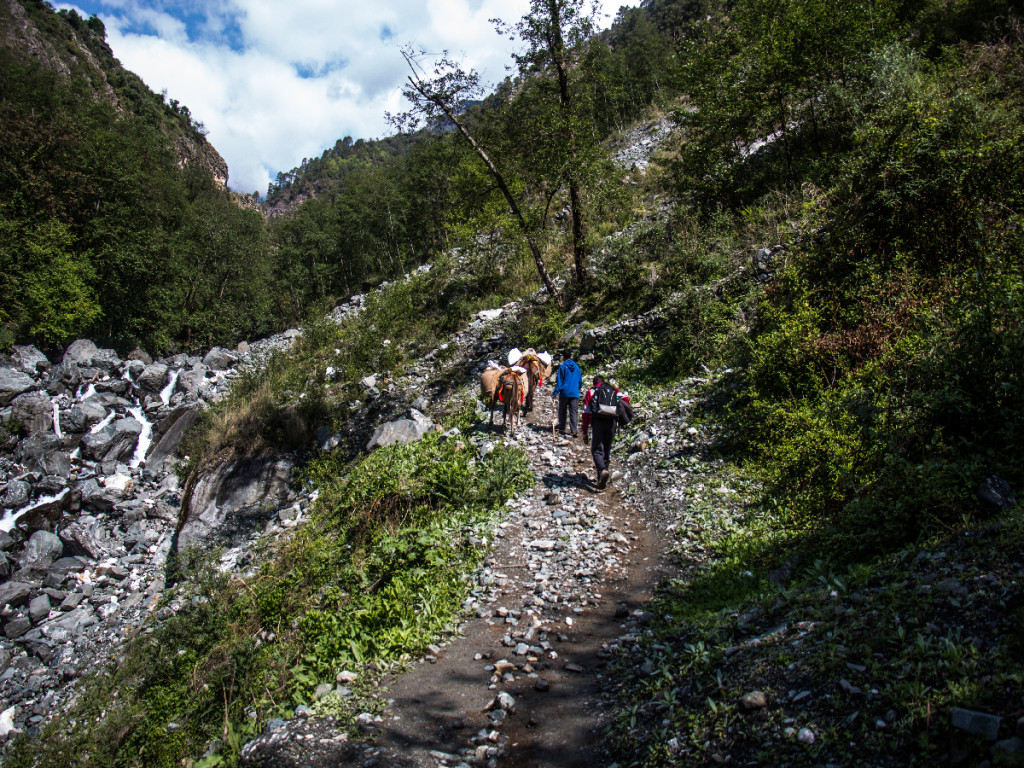 My plan was to hike until Agoda and then return back to Kuflon a day trip. I reached Sangam Chatti with Govind a local of Agoda. He wanted to get his Adhar card processed in Agoda and doubled up as my guide and porter. A fifty one year old Garhwal local I was amazed by his fitness level. Our hike started from Sangam Chatti through non existing trails just enough to place one foot at a time with the deep valley to the other side. The earlier evening it had rained heavily so the terrain was slushy and slippery with loose stones falling of the slope. Rubble, boulders were strewn all over the trail and trees fallen across. 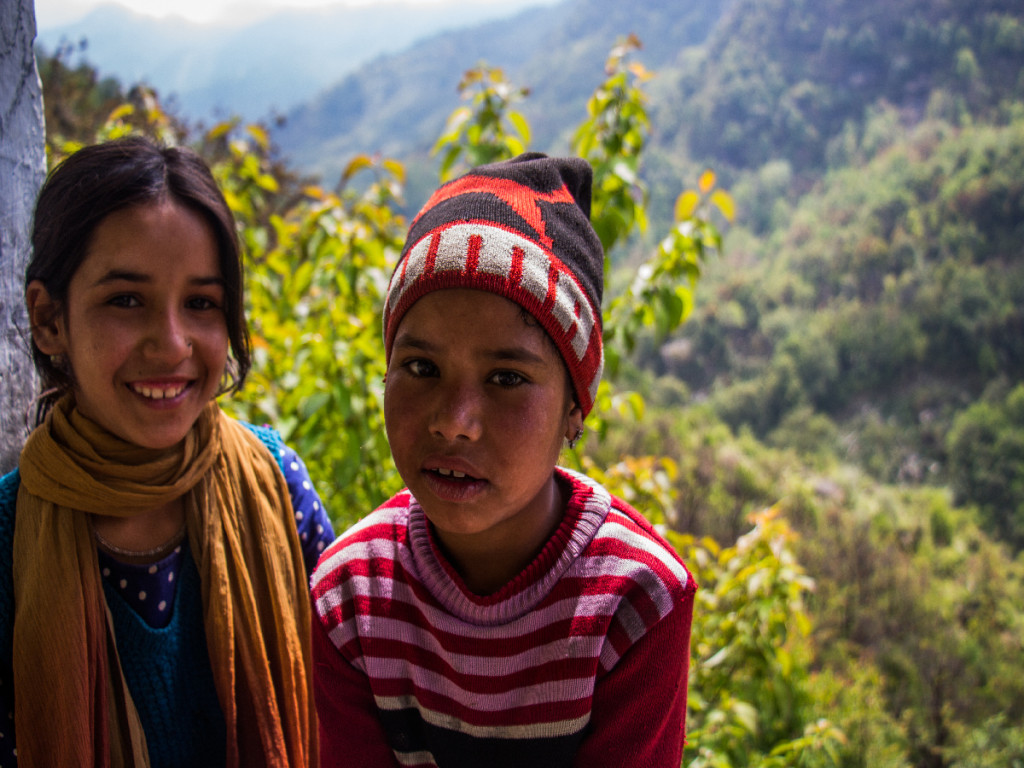 As I walked ahead the surroundings changed as I walked through wooded forests in the company of the birds busy chirping and the Assi Ganga flowing through the valley. I was surprised by the fact that the only mode of transport to Agoda was by foot or mules. With a difficult terrain not fit to build roads the villagers walk to reach their village. I noticed old men and women walking down the valley to reach the town of Uttar Kashi. An old lady walked with a three month old baby all the way down through the rough territory. Kids as small as three year olds walked with ease. All the supplies to the Agoda village are brought on mules or carried by porters.

As we scaled height suddenly Govind turned back and eagerly showed two towers installed on the other mountain. He was super excited and asked me to click photographs of the same and said you see the tower there that is Idea which is operational since last 2 years the BSNL tower has been recently installed and soon would be functional. When I asked him about his village and the hard life in the mountains with limited access he said , few days back I was in Haridwar for my niece’s wedding. Well it was so noisy, crowded with heavy traffic that I didn’t want to stay there as it was very claustrophobic. Here we are at peace in the mountains. 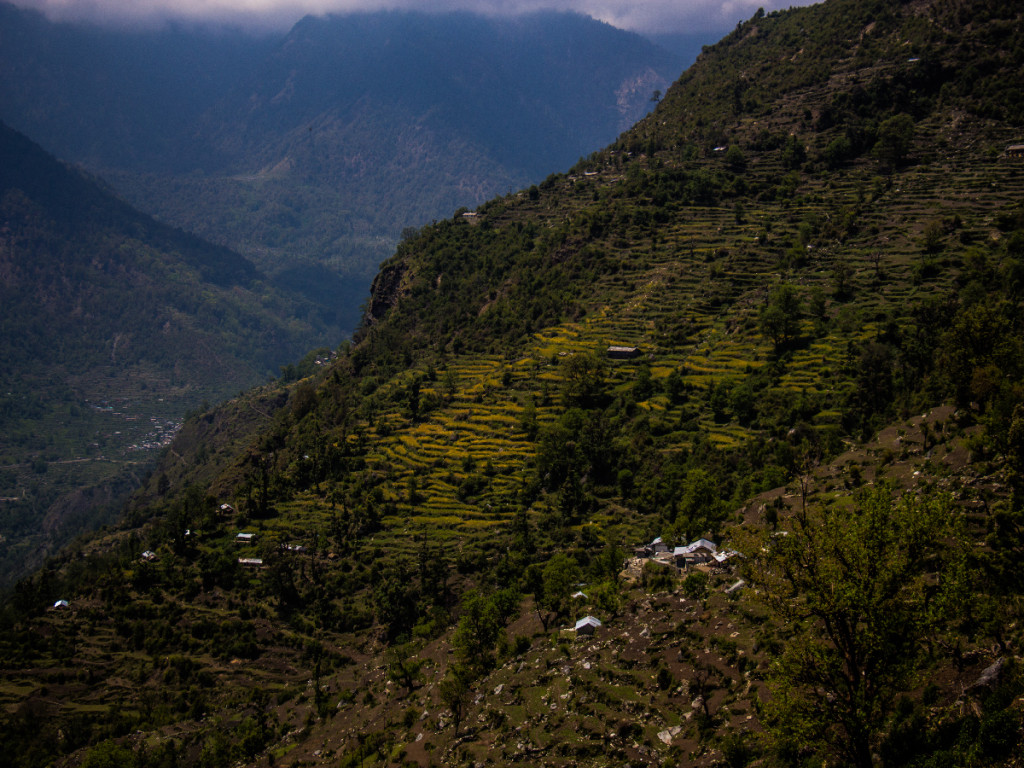 We reached Agoda after 3 hours of hiking, well it weren’t for me Govind would have reached in an hour. He left me at a Lodge within the village which caters to trekkers enroute to Dodital. After a simple lunch of dal rice I walked around the village and interacted with the villagers. Small terraced fields cutting the moutain slopes had been tilled to cultivate potato. Rajma, Rai ( a mustard variety), Wheat, Soya Bean are the other crops which are normally grown in this region. 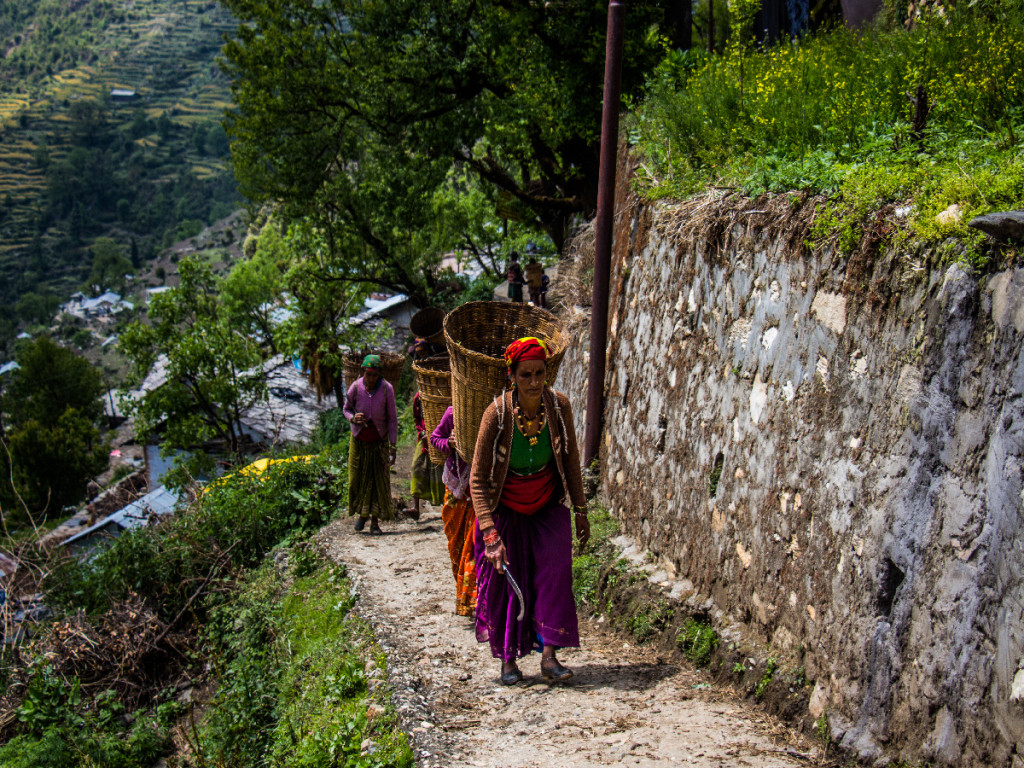 Women are the hardworking lot tending to cattle, gathering fodder, working in the fields, feeding kids, working in the kitchen. Men normally work in the fields only while ploughing after which they do not visit the fields. Life in the mountains is tough for women but they take it with a pinch of salt and a smile on their face. They invited me to their home and offered tea. They were very happy to get their photos clicked and also shied at the thought of it. 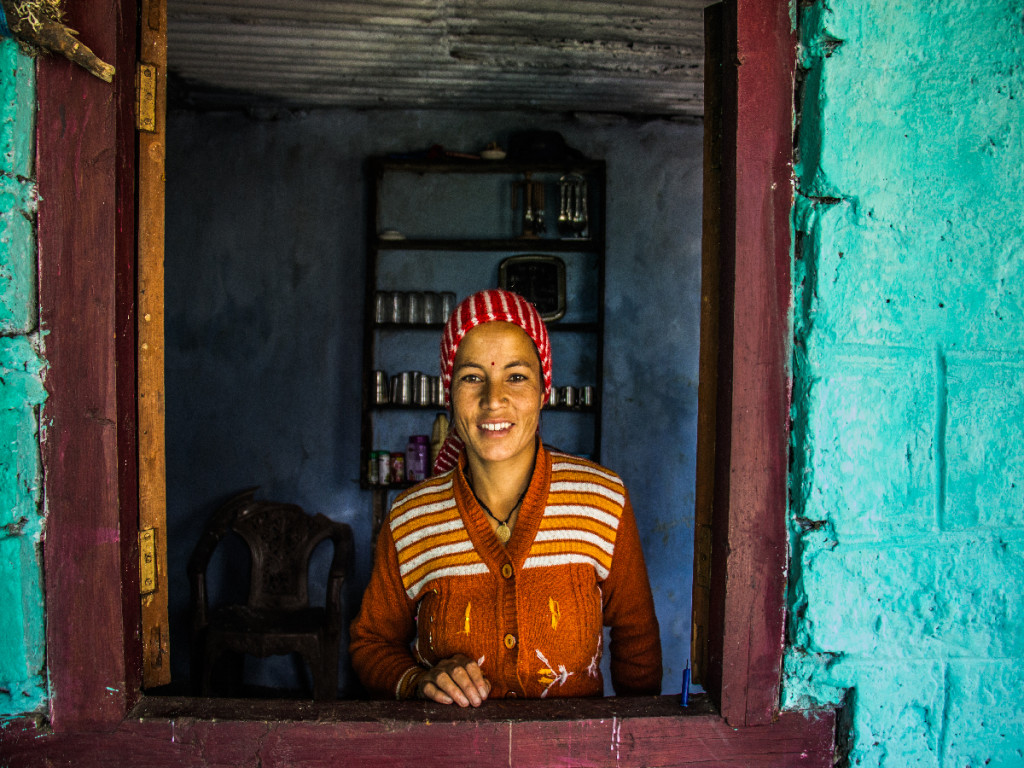 She fed me lunch

Schooling in Agoda is available only till class eight after which they need to go to a nearby village by walk to study until twelfth grade. For graduation the only nearest option is at Uttar Kashi which is far and hence the need to stay in hostel. 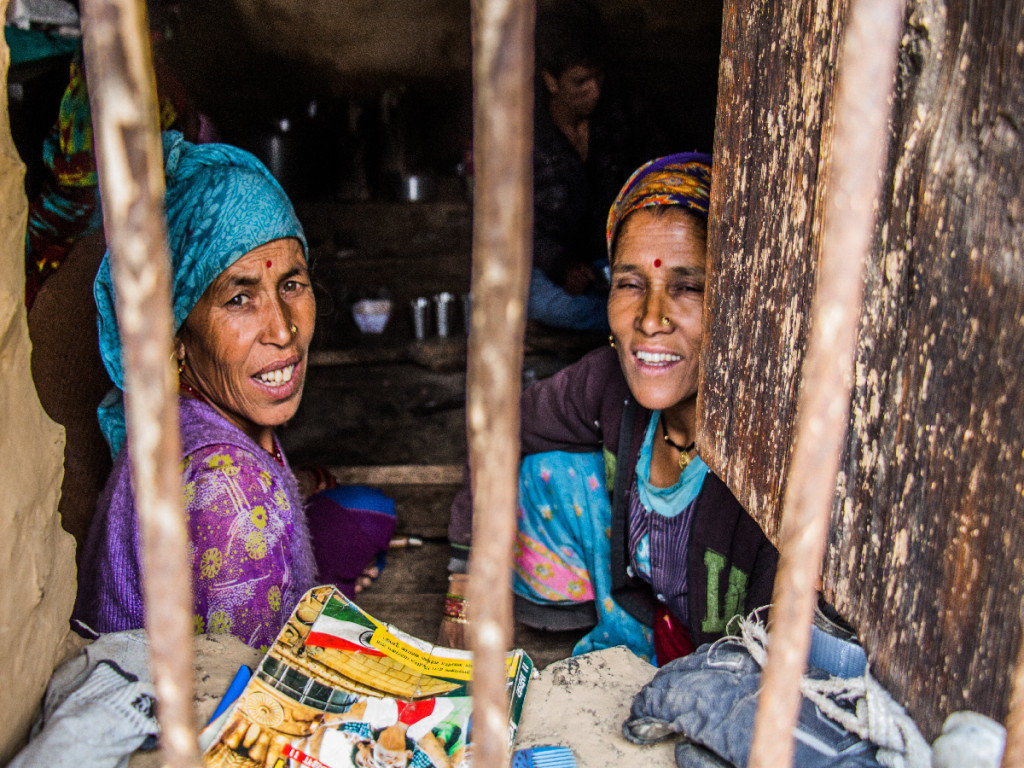 When I turned back from the village later in the day I met kids having a gala time as the cattle grazed around the hills. When I asked them about school they immediately retorted It is Sunday, so holiday in unison!

During heavy rains the village is completely cut off from the rest of the world. No medical facilities make life tougher during critical situation. Well life in the mountains is not easy but the villagers of Agoda are the ones who live life as it comes.  Their hardworking and helpful nature is something that has left a permanent mark in my travel tales. 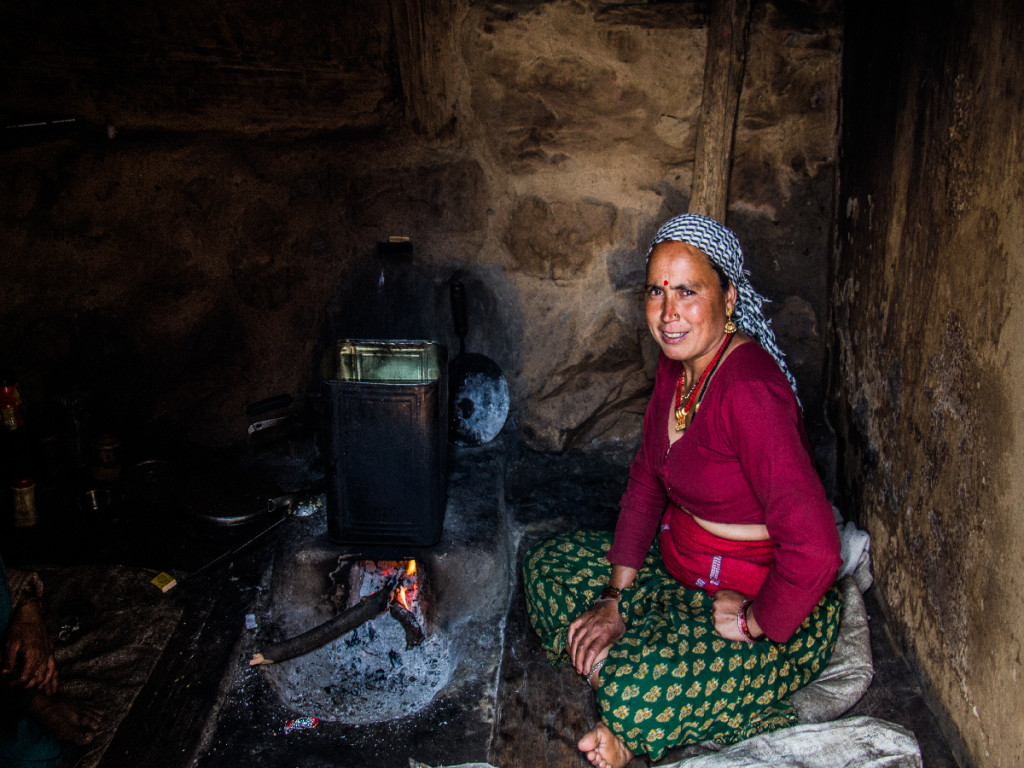 3 Comments on “Agoda enroute to Dodital”