Posted on September 5, 2015 by Rathina Sankari 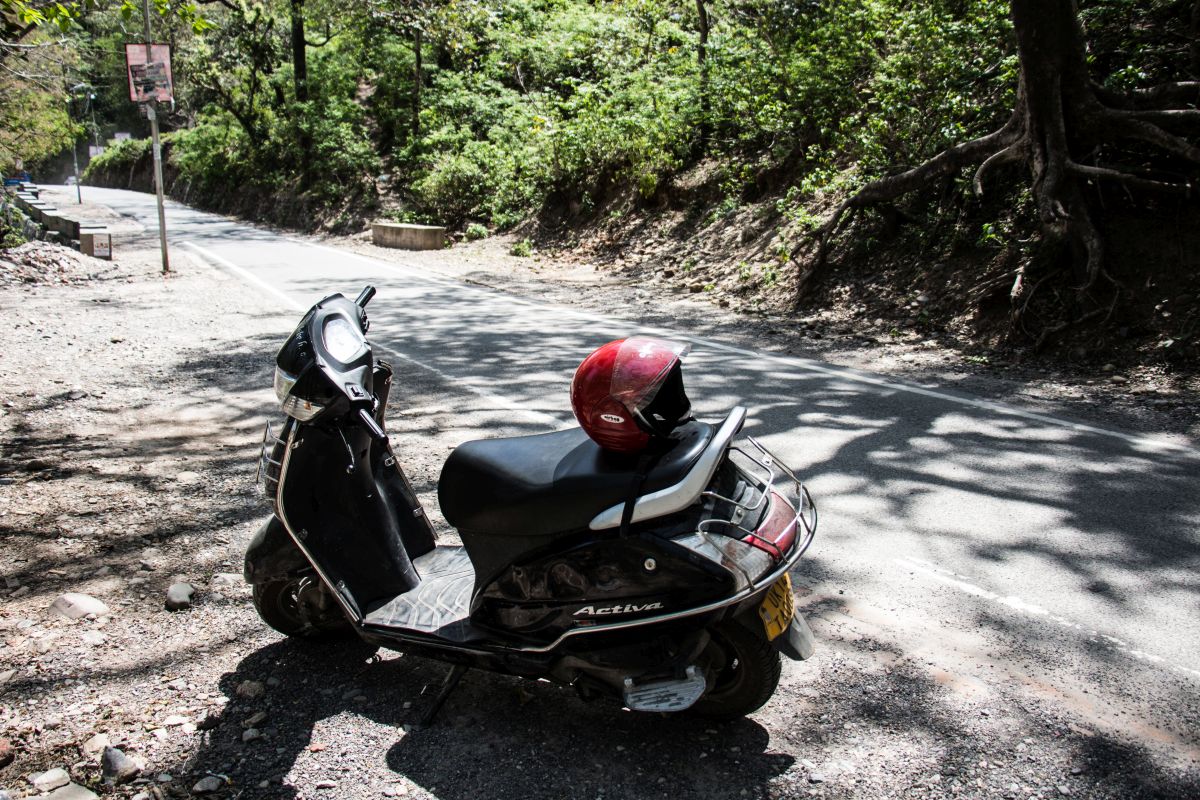 My host at Amraai homestay in Rishikesh suggested I rent a two wheeler to explore Rishikesh. He suggested I visit Ranjit Motorbikes near the Hemkund Sahib Gurudwara and check out the bikes there.  The shutters were still down when I reached the dealer’s shop. The shop is quite famous among bikers and Royal Enfield bikes rule as customers are said to rent bikes and drive to Ladakh. 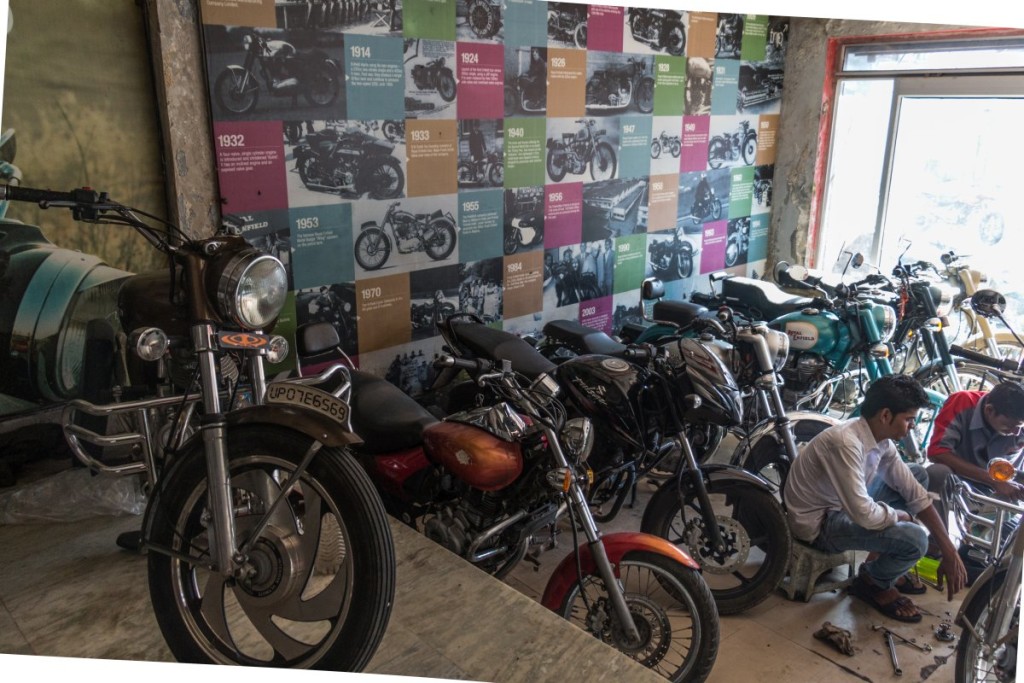 For a 350 cc geared motorbike it costs INR 800  a day, while a 500 cc geared bike costs INR 1000 a day. I rented a Honda Activa for a day which costed me INR 350 with a helmet. (The helmet comes with an additional cost of 50 INR). One needs to submit an original ID proof which would be given while returning the vehicle. 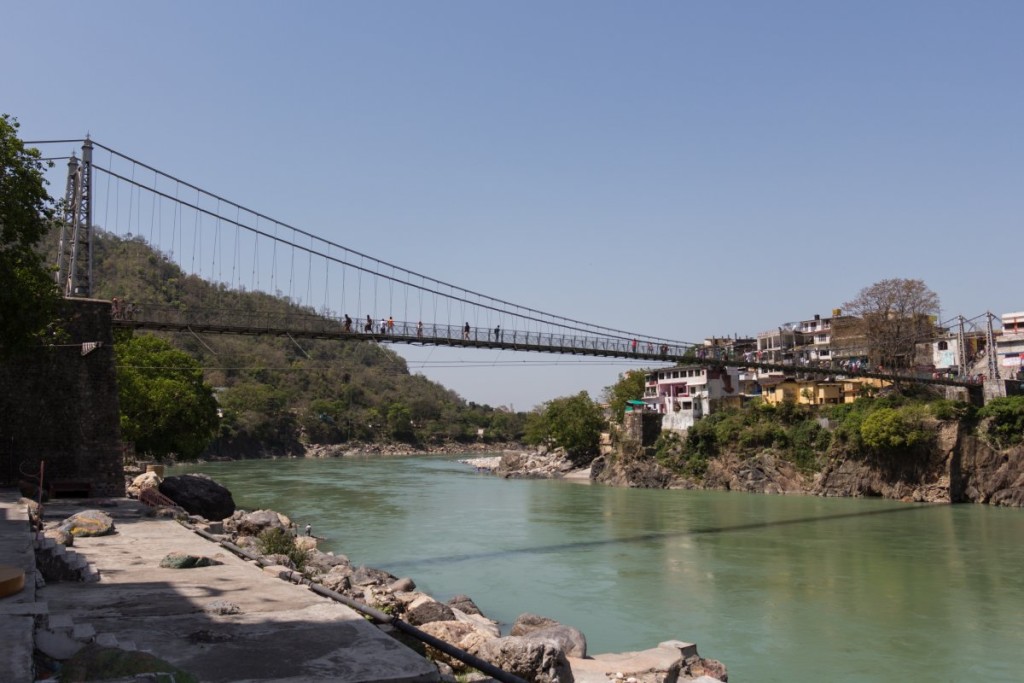 I straddled the scooter and drove across the streets of Rishikesh towards Lakshman Jhula one of the key landmarks of the religious destination. It is told that Lord Rama’s brother, Lakshman crossed the Ganges on a jute rope at the same location hence the name. One look at the bridge and I wasn’t sure if I could cross it on the bike. The narrow iron suspension bridge 450 feet long was heavily crowded as tourists rambled on it clicking photographs and scouting the surroundings. I checked with the locals around and after an affirmative response I made my way through the vertigo inducing bridge. Tourists were surprised to see a two wheeler being driven through the bridge. There were shops on either side of the bridge selling knick knacks, trinkets, clothes, gems, rudraksha, flowers etc. I saw the huge thirteen tiered Trayambakeshwar temple or the Tera Manzil Temple to the left. This temple houses many Indian deities and in the lower basement you are sure  to find some Yoga classes being conducted for free. A climb to the top most level is sure to give a panoramic view of the city. 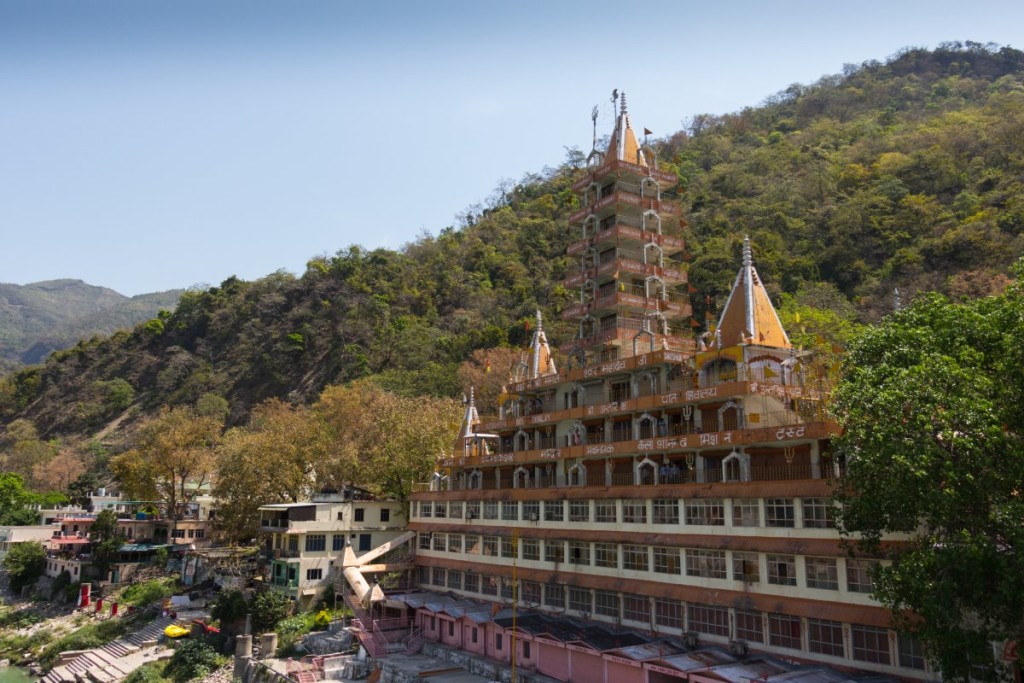 I crossed the temple and drove ahead along the green river. A group of youngsters were busy paddling down the river on their rafts. On the other side of the bank I noticed a camp site with some tents pitched in. I had left the crowd behind me. I drove uphill on a desolate path when suddenly I felt something go wrong. The vehicle seemed to have slowed down and despite giving a full throttle the bike had slowed down and then come to a halt. I looked at the fuel gauge and noticed the needle reading empty. I had completely forgotten to fill the tank, my host had told me that when the vehicle would be handed there would be minimal fuel. But it had completely slipped off my mind and the guys at Ranjit Motorbikes hadn’t informed me as well. I was stranded at a location where there wasn’t a single soul. 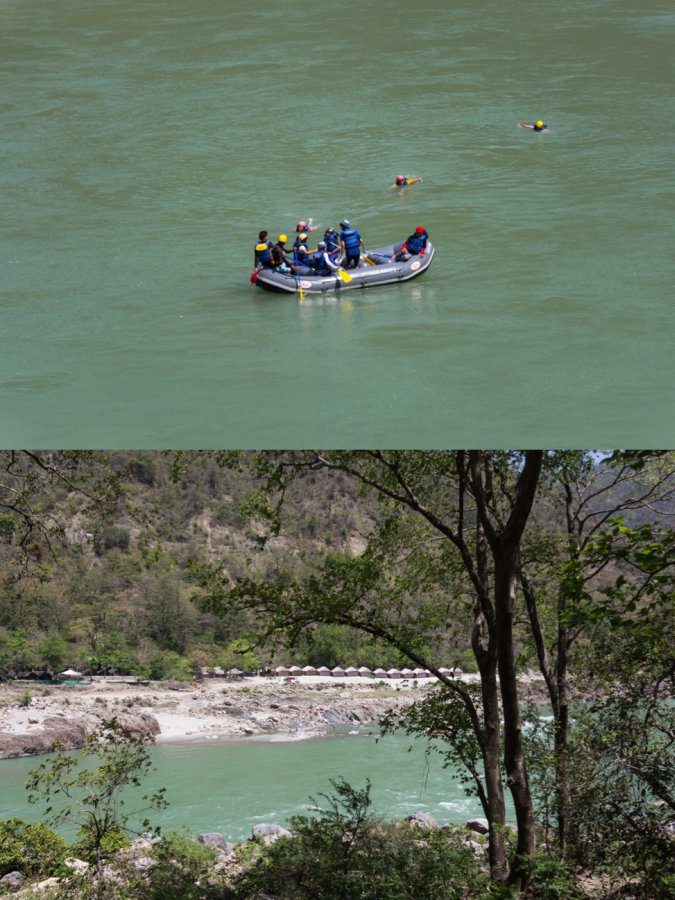 I turned back and pushed the bike towards Lakshman Jhula. After trudging for around 800 meters I came across a shanty selling fuel. I tanked up and headed back towards Neergud a waterfall. After driving for around half an hour I reached the entry point of the waterfall. I bought an entry ticket and scanned the uphill road ahead. It was a path of rubble and there was a high probability of skidding. I left the vehicle at the entry and started my 5 km climb in the scorching afternoon sun. After walking for a kilometer I hitched a ride with a group of tourists to a point after which you need to climb steps. 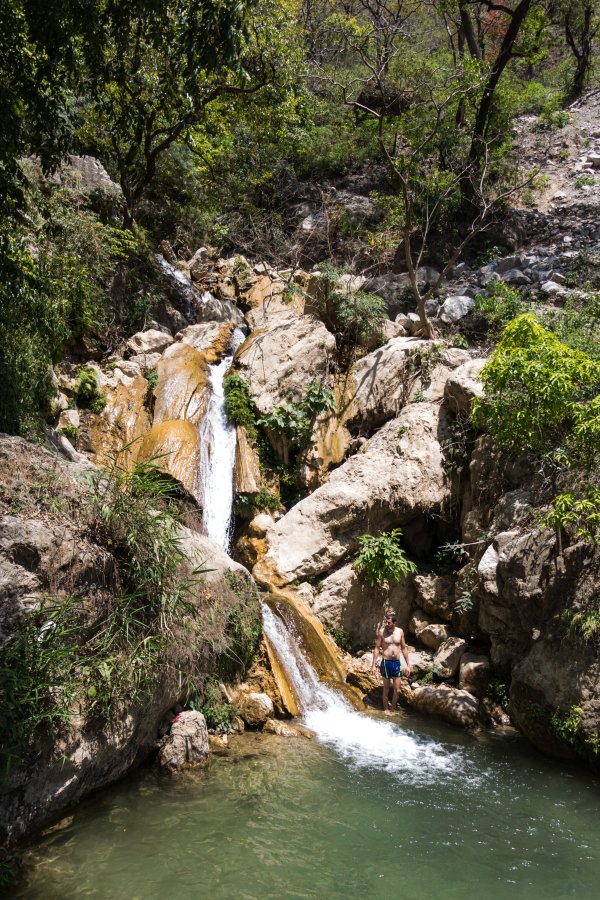 The Neergud waterfalls is amidst a forest and is frequented by foreigners. A quaint bridge across the waterfall is a perfect place to soak in the surroundings. People were seen taking a dip and swimming through the waters. It is best to enjoy the waterfalls in pleasant weather probably early evening or early morning else it would be difficult to beat the heat. Carry drinking water as it might be difficult in harsh weather conditions. A lone shop sells snacks, cold drinks for the visitors. Shooting for a commercial was in progress when I visited the waterfalls. 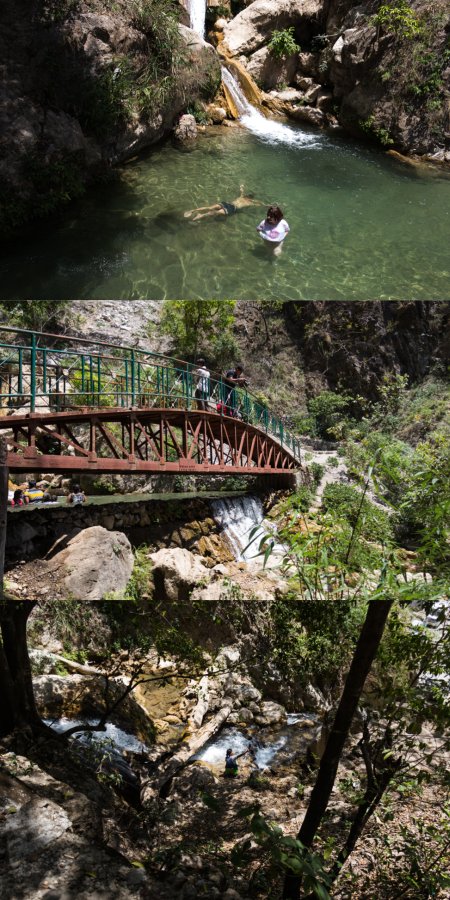 I returned back to the market close the Lakshman Jhula and drove ahead to The Little Buddha Cafe. Its a cosy restaurant with cane furniture settings offering  international cuisine. Its a perfect place to laze around, catch up with friends and also spend some time in solitude by taking a seat overlooking the Ganges. You have free WIFI access in the cafe which is frequented by foreigners. Sink into one of the chairs face the Ganges and enjoy the view with a generous portion of the Israeli, Tibetan, Indian, Chinese food. 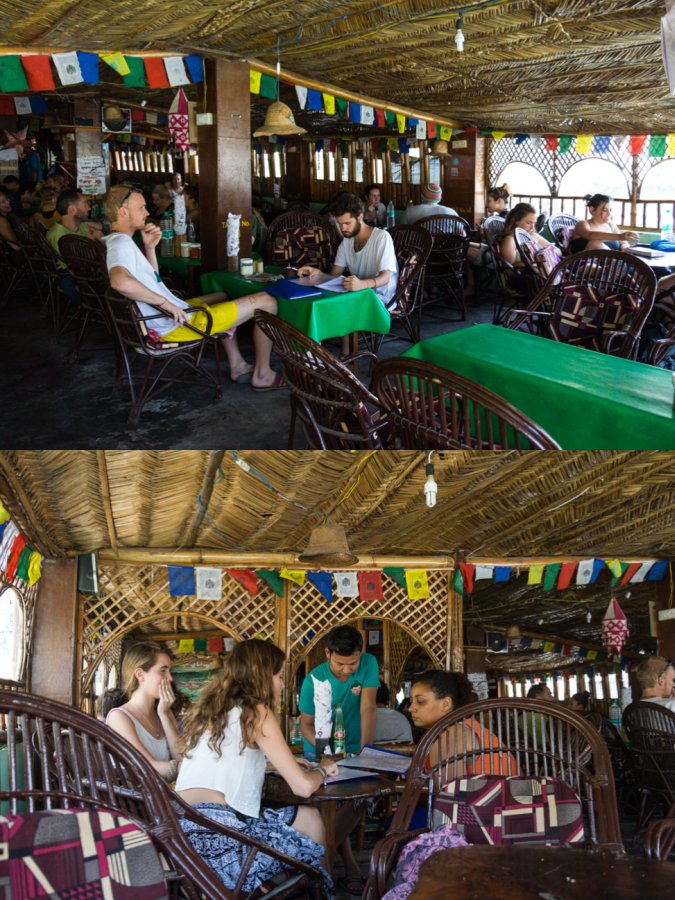