Posted on December 6, 2015 by Rathina Sankari 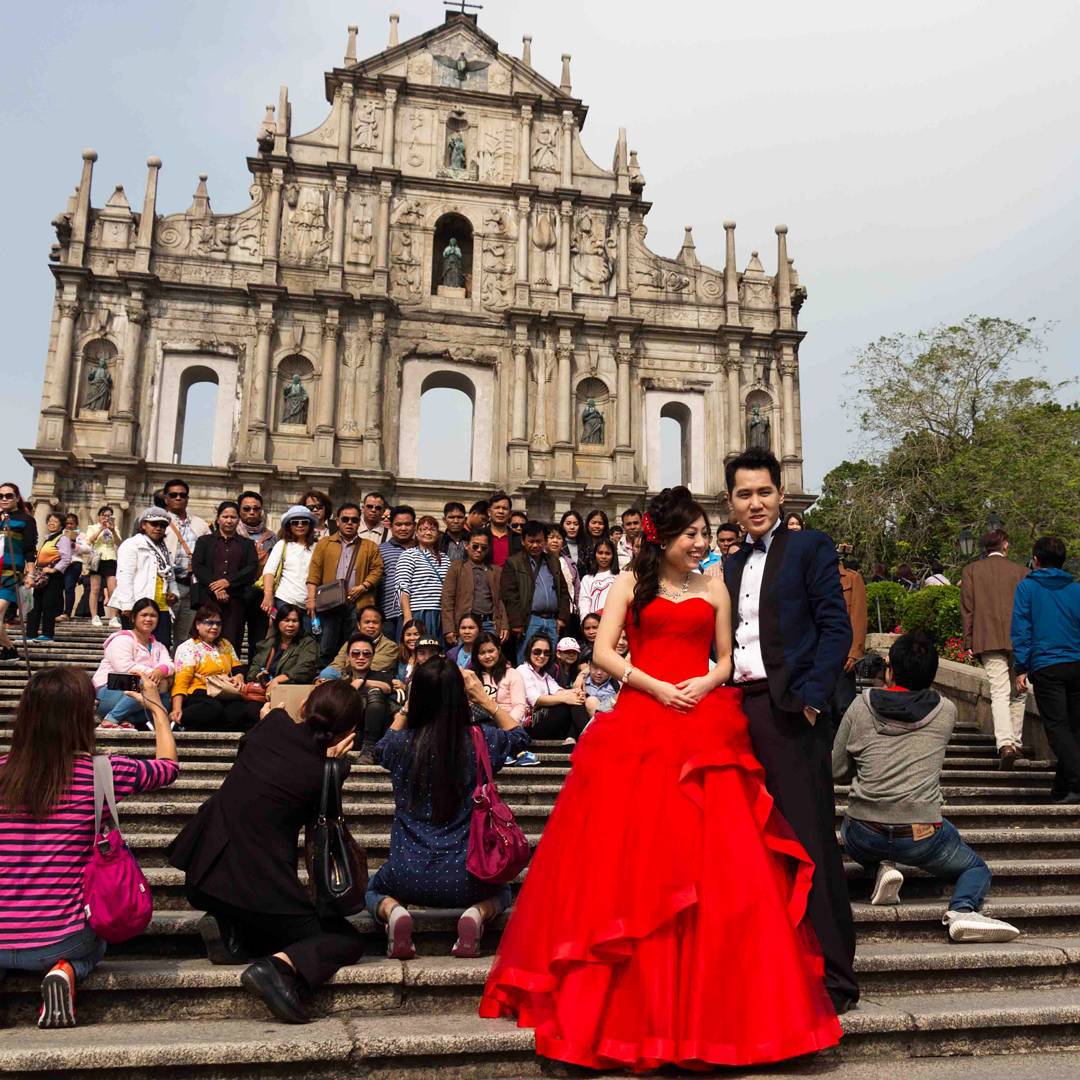 This blog post was selected for the Blogadda Tangy Tuesday Picks

Macau is a SAR (Special Administrative Region) which has a separate political system from that of the Peoples Republic of China. It has high autonomy and the region comes directly under the Central People’s Government. Having said that Macau is a peninsula of Mainland China across the South China sea and the Pearl River Delta. It is rightly called the Las Vegas of Asia as the gaming industry contributes to most of its revenue closely followed by tourism and hospitality. As Macau was under Portuguese administration till 1999 it has large influences of the Portuguese and Chinese culture. It is a great place to spend your time in the old city area for an in-depth view into this melting pot. 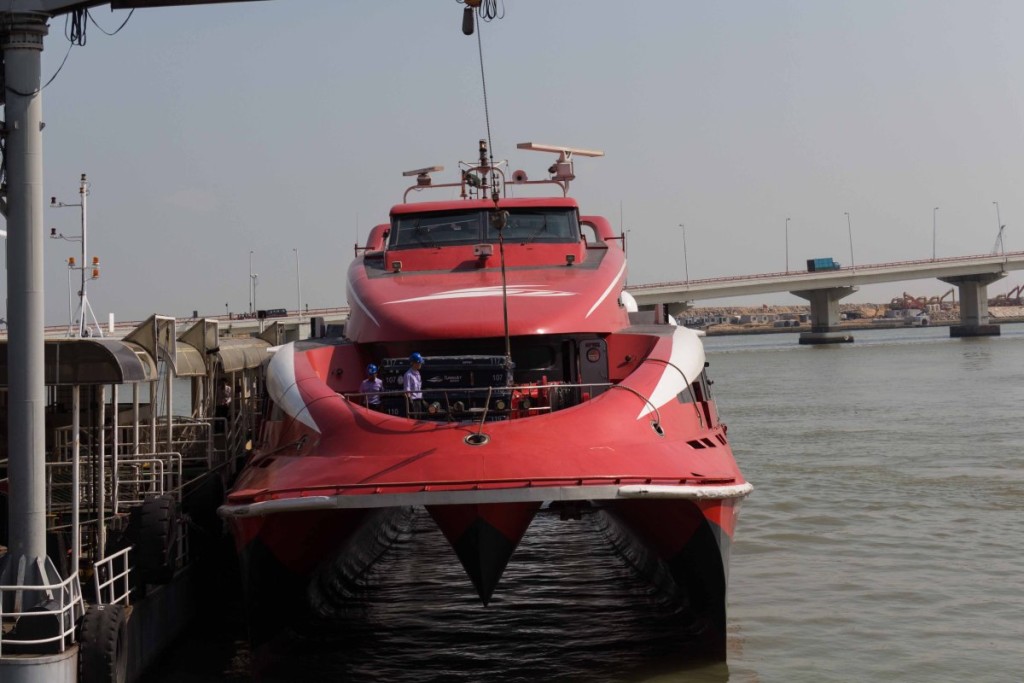 Ferry between Hongkong and Macau

From India there are direct flights to Hong Kong airport after which you can take the ferry to Macau. Jet airways and Cathay Pacific fly nonstop to Hong Kong. In case you want to fly to Macau directly there are various carriers that take you to Macau airport with one or two stops. Personally I prefer the Hong Kong transit as it is hassle free and you save time. While checking in at Mumbai/ Delhi airport if you inform at the counter that you would be taking the ferry to Macau from Hong Kong you can collect your luggage directly in Macau after alighting from the ferry. Also all the immigration formalities can be completed in Macau directly. The ferry travel to Macau is approximately 45 minutes. There are many carriers that ply between the two SAR the one that I took was the Turbojet Ferry. Similarly on your return trip you can check in at the Macau Pier  and your baggage would directly reach your destination in India. Ensure in the Hong Kong airport after the immigration you do not forget to collect the tax refund of 120 HKD. Though the Macau Pataca is the official local currency the well known Hong Kong dollars is widely accepted in Macau. The value of both the currencies is almost the same.

Entry into Macau for Indians is pretty easy all you need is an Indian passport with few blank pages and the foreign currency with details of your stay. Normally the officials at the immigration counter do not question you and the visa is valid for a month. 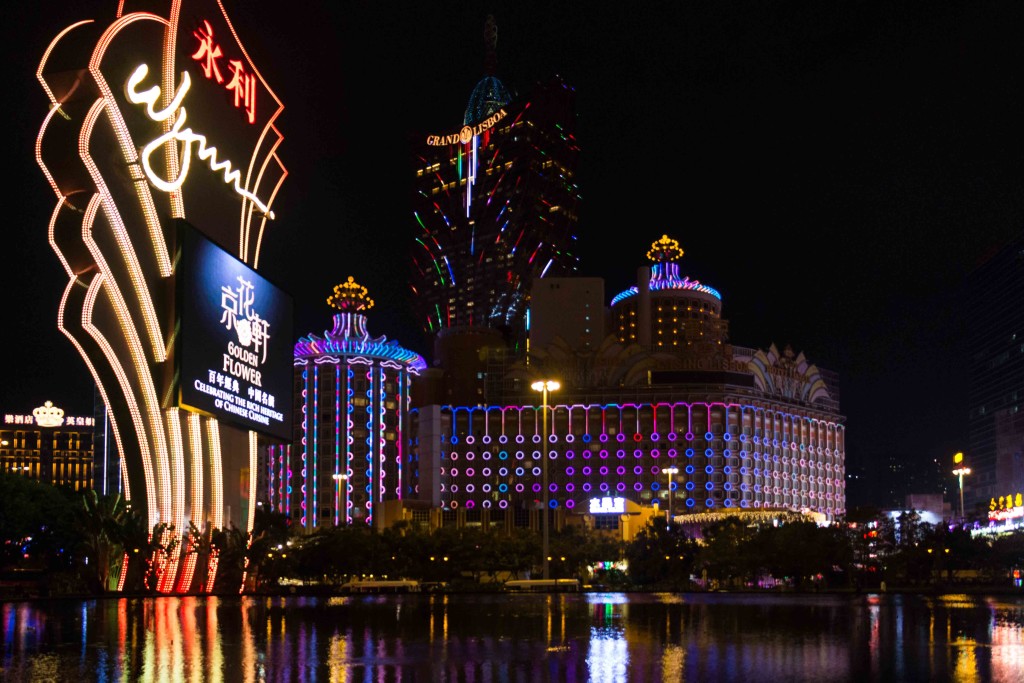 Most hotels in Macau belong to the luxury category. It caters to the high rollers arriving from Mainland China and Hongkong followed closely by Taiwan and other countries. Each hotel has its own casino and there are also the big ones who are all into gaming like the Grand Lisboa, Wyn, MGM etc. Macau can be categorically divided into 3 parts the Macau peninsula followed by Taipa and Coloane. Like the Macau peninsula, Taipa too has many hotels with loads of glitz and color. But Coloane is very different that has been left untouched of the usual Macau traits. It can be called the countryside of Macau, littered with beaches and showcasing a simple lifestyle. So if you are in for some laid back experience head to Coloane else stay at Taipa or the Macau peninsula for the gaming experience with a touch of Portuguese culture. 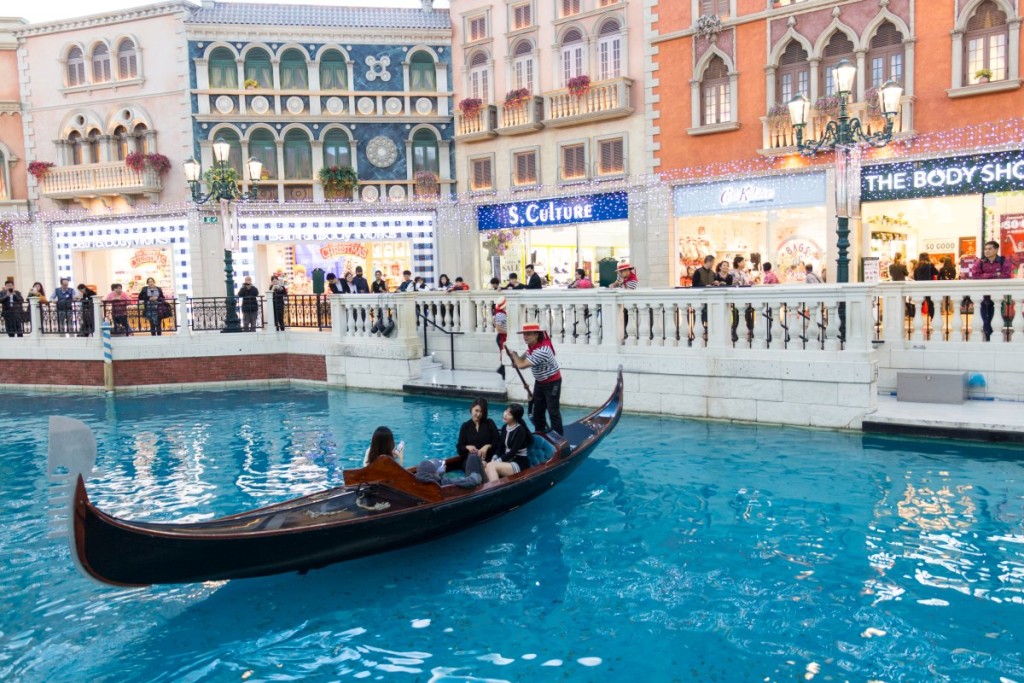 The Venetian is a grand hotel in Taipa with gondola rides, high street shopping, restaurants and the biggest casino. The Galaxy in Taipa with an array of hotels like the Ritz Carlton and JW Mariott is also a good option. 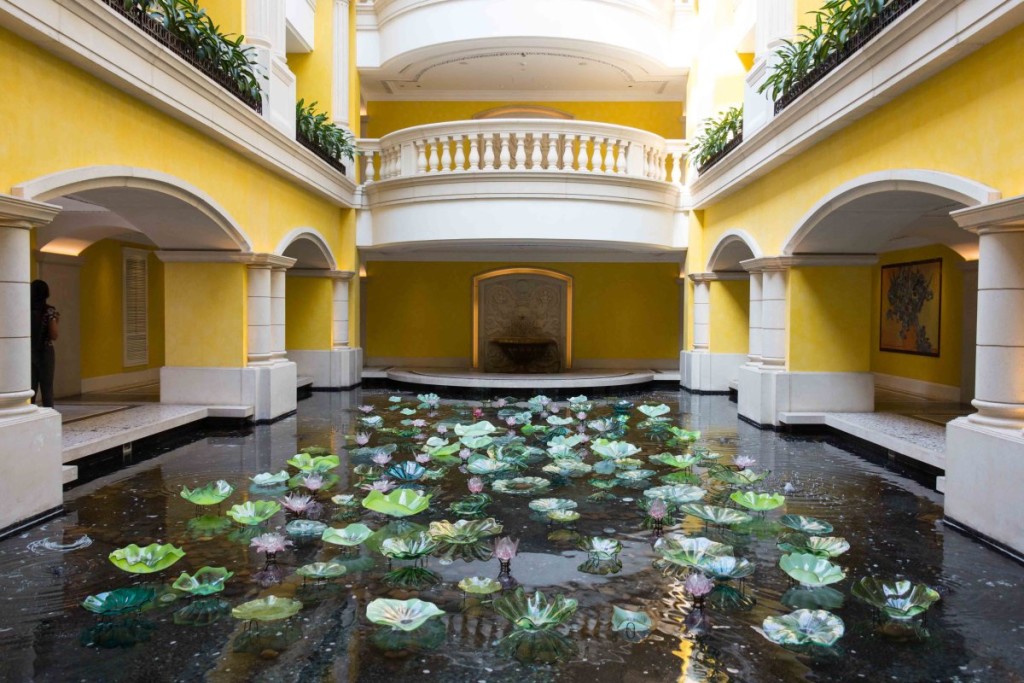 If you want to stay closer to the Portuguese quarters head to Sofitel at the waterfront which overlooks the Pearl River beyond which is China. 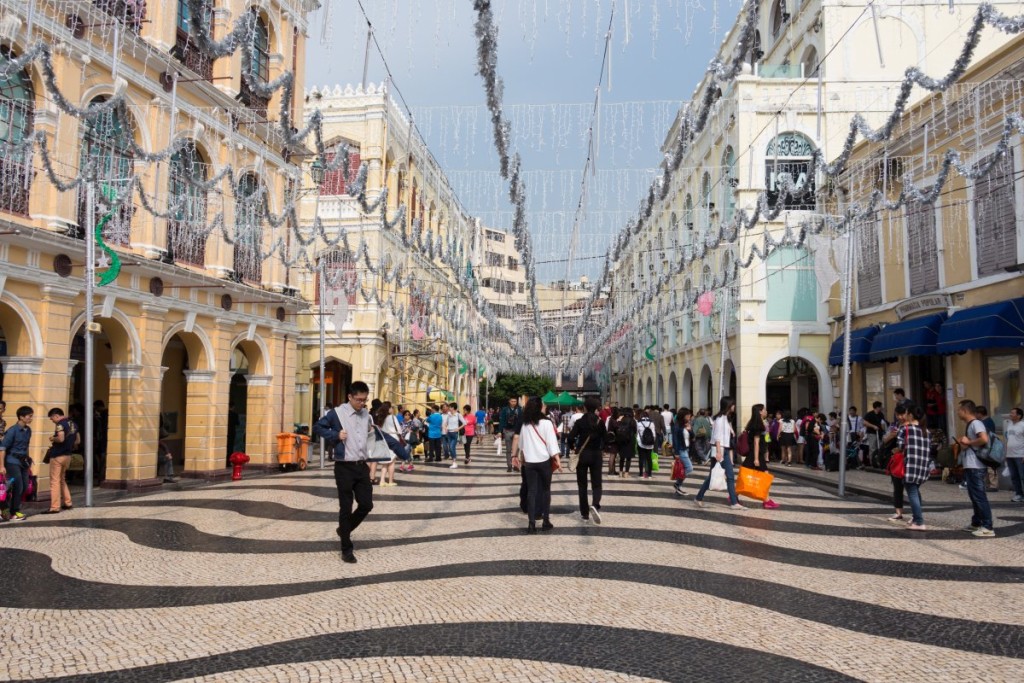 It is very cheap to travel within Macau if you take the coaches operated by the hotels. Most hotels run coaches on a regular basis to various prime destinations within Macau. You can take those buses free of charge and alight at the destination of your choice. When you are done with your sightseeing and shopping you can board these buses again. All you need to show is a proof of you residing in that hotel. There are also buses operated by the government which cost less that 4 HKD for any destination across Macau. Another unique mode of sight seeing are the Trishaws a fusion of the rickshaw and tricycle. Two wheeler are also available in Macau on rent. 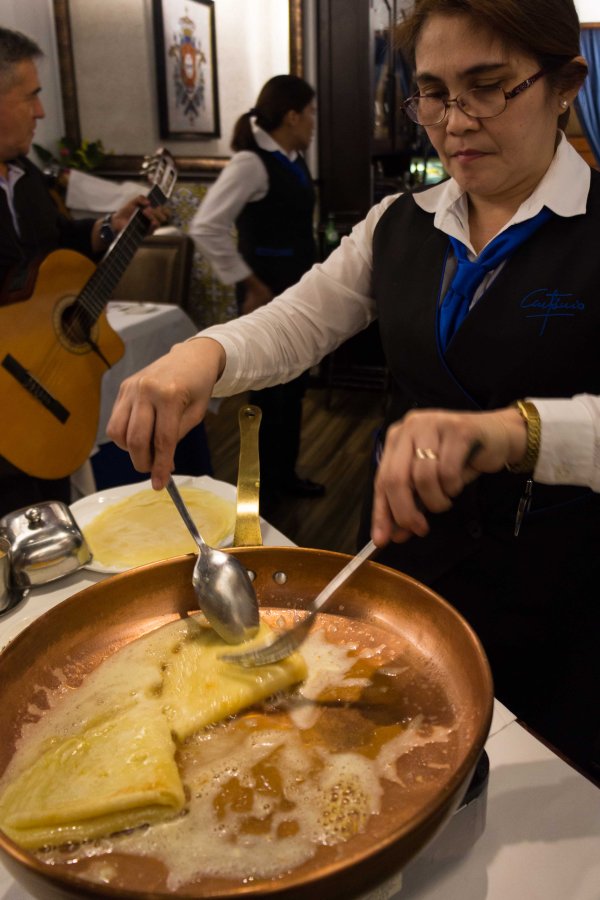 Crepe Suzette being prepared at Antonio in Macau

Macau is where the East meets West. With the Portuguese having ruled for more than 400 years their cuisine and the Chinese cuisine  is found in every street of Macau. Small outlets on the roadside to alfresco restaurants Macau has lots to offer to its visitor. There is the Macanese (fusion of Chinese and Portuguese), Portuguese and the Cantanese along with various other South Asian cuisines. I personally loved the Macanese and the Portuguese dishes. Some of them are my personal favorites like the African chicken, Crepe Suzettte, Goat cheese with bread and honey, prawns cooked in garlic sauce, the Portuguese olives and their freshly baked warm breads. Do not miss a visit to Antonio a Michelin star restaurant at Taipa. It serves authentic Portuguese cuisine with some live Portuguese music.

Macau is not just about the gaming world there is lots more to do when in Macau more on that in a separate post.

← A mouthful of Pune
Christmas Joy with Mad Over Donuts →
Tweet

13 Comments on “Travel tips to Macau”