Posted on September 26, 2012 by Rathina Sankari 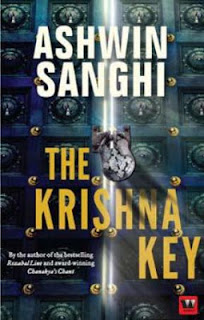 Well I wonder from where I should start. This exhaustive piece of literary fascination has left me spellbound end of the day.

Summary – The story traverses through the whole of North West India from Gujarat to the Himalayan Ranges. Historian Ravi Mohan Saini embarks on a journey to crack the puzzle left behind by his murdered friend Varshney. The puzzle is a complicated maze that requires the knowledge of the vedic scriptures, archaeological sites, temples of historical significance, relics, chemistry, mathematics and cultural anthropology. Saini who is a master in all these areas is accused of murders of his close friends and manages to give a slip to the police multiple times. He confronts in Priya his close accomplice when he is on the run but later learns of her true intentions and identity. Priya is all set to realize the dreams of a Krishna fanatic who is of the belief he can create Kalki the last avatar of Lord Vishnu. It’s this run and chase game that leads Saini to the significance of the statement ‘The philosopher is more important than the stone.’

Review – The book is a product of a deep dive and exhaustive research of not only the Hindu scriptures but also Greek mythology, Christianity and Islamism. The author has taken great pains to understand the significance of each of these areas and weave into it a plot that stands in modern times. The story keeps you engaged but doesn’t pull you into a whirlwind. The Mataji character brings in a sense of enigma, power and cult outlook. I was all for a surprise when the revelation came into light that Priya was the real Mataji. Saini sounds to cogitate and has knowledge of all the before told subjects.
Though Radhika Singh is portrayed as a tough cop I was in for another surprise when Saini cries his heart out in the Saptarishi Cave fearing she would be dead. There wasn’t any prelude to his feelings for her. Also there have been few references to Priya as against Radhika in the description of the same incident on page 301; it looks like some editing error.

The book also is a great refresher of the Mahabharata happenings as each chapter opens up with snippets of the epic. It’s a story within a story where Krishna is the mainstay who drives home the point ‘As clothes are changed, similarly the soul adopts and discards bodies. The soul cannot be pierced by your arrows nor can it be burnt by fire. It cannot be wet by air. It is permanent and universal.’

The package as a whole would have been further appealing if the end would have had more meat. It sort of tapers of, as it doesn’t have the required action and the momentum to give it a perfect finish. The Krishna Key for few might be an overdose of the ancient texts while for others it might be a useful insight into our scriptures and epics. Either ways you could go for it as one gets a great view of the knowledge base that our ancestors had.
This review is a part of the Book Reviews Program at BlogAdda.com. Participate now to get free books!

← The Third Twin
A precursor to The Stopover →
Tweet

2 Comments on “The Krishna Key”